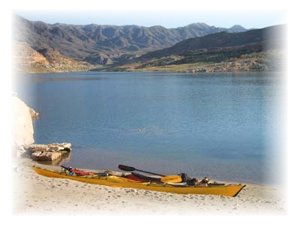 Despite its' proximity to Las Vegas, the majority of our time on the lake has been unsullied by the presence of other people. The remoter areas of Lake Mead's 550 miles of shoreline can feel completely isolated and the scenery is stunning. Our first trip was during Thanksgiving and the temperatures were a little chilly, in the 50s and 60s.

We arrived at South Cove on the Arizona side of the lake late at night and pitched our tent near the boat ramp parking lot. It was completely silent except for the wavelets hitting the shore and the nearly full moon made it almost daylight-bright. After an early wakeup we launched and turned N/NW to go explore the confluence of Lake Mead and the Colorado River. The conditions were completely calm (more about that later) with the turquoise water being perfectly glasslike. There is no natural shelter either on the water or on land at Lake Mead; the sun can see you anywhere you go, and even though it was a little chilly at the start, the direct sun warmed us up very quickly.

Lake Mead can be a bit unforgiving in terms of finding places to land, so you need to plan ahead a bit since there are sections where high canyon walls dominate the landscape and there are no places to set up camp. We had expected to take Lake Mead to God's Pocket to explore the Colorado River a bit, but we ran into an unexpected grassy landmass in the vicinity of Howland Cove. We tried to get around it a couple of times without success; none of the channels seemed to penetrate it very far. We beached our kayaks and the Rhino explored it a bit to see if it would be possible to portage the boats to the other side, but it seemed to go on for quite a while. It turned out that low water levels at Lake Mead had left the lake and the Colorado River unconnected. There was a flow of water travelling underneath the landmass, as evidenced by some currents, but there was no getting to the river from there. We turned around and started exploring the Gregg Basin instead.

Lake Mead is divided into 3 arms with several wide basins, with each of the arms except the northern Overton arm being connected by a long, narrow canyon. The scenery was stunning, with massive red and green buttes towering over the still glassy lake, wild cows wandering the shorelines, fish literally jumping out of the crystal clear water and perfect weather.

We initially had some trouble identifying exactly where we were because the low water levels had unveiled islands that weren't on my charts and changed the landscape enough to make it tough to figure out exactly what we were looking at, but once we made the adjustment we were all set. 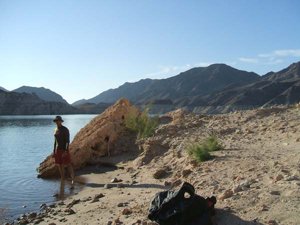 After paddling around the basin for the majority of the day and identifying a dozen beautiful camping sites, we settled on one and set up for the night. It's very easy to pitch a tent at Lake Mead since the shores are mostly sand and there are plenty of boulders around to help with anchoring. You have to test the ground at each campsite carefully before you put in, however, since a good portion of what looks like inviting beach is actually deep mud with a light crust of sand. It can take some work to extricate yourself from one of these mud landings, so it's best to stick your paddle in the ground and see if it's really sand. At this point we still hadn't seen another human being, but we had plenty of animal visitors and shared our campsite with a small herd of wild cows and tons of fish.

We got up early and washed off in the lake before continuing on to the Virgin basin. The plan was to paddle about 20 miles to Temple Bar and set up camp there. The first part of the paddle was uneventful and beautiful as we made our way through the canyon connecting the two basins. As we made our way through the canyon the wind picked up significantly, but there were no high wind advisories over the weather radio, so we continued. The Delmar Butte towered over everything; the butte is so regular that it almost looks manmade. It's an imposing feature.

In the vicinity of Burro Bay we came across a house boat that had put in there, but that ended up being the only other evidence that we weren't out on the lake by ourselves. The wind was blowing at 25 to 30 MPH at this point and it was becoming very difficult to make forward progress, but in comparison to the waves we were used to paddling in on the Pacific off the coast of southern California, the conditions still seemed safe to continue.

That assessment changed dramatically as we reached Decision Island. The wind had whipped the lake into a frenzy of steep whitecaps that were breaking on top of each other. The effect was magnified by the narrowing land between the island and the Temple, a steep hill on the opposite side. The wind was howling through this gap at an ungodly speed (NOAA weather radio said 30 MPH with gusts to 40 MPH) and I knew that there was no way to turn the point and go broadside to the waves to get to Temple Bar. The waves were in the 6 foot range, which isn't huge, but they were right on top of each other, with no period in between, which made it very difficult to keep the kayaks upright.

We took shelter behind Decision Island, where the wind still pummeled us and nearly carried away our fully loaded boats when we beached them for a bathroom stop. There was no telling how long this was going to last and there was no way that our tent was going to stay put, so we turned around to head back to the Gregg Basin. It was tough controlling the kayaks in the strong following seas, but we averaged 7 MPH on the way back as the waves and wind pushed us to our destination.

As soon as we turned into the connecting canyon the wind was blocked and we took a quick break before setting up at a beautiful camping spot with a sandy beach with a beautiful pink cliff above it. The next day's paddle was uneventful as we returned to our launch point.

You are supposed to pay for parking, but there is no place to pay. We left money in an envelope on the windshield with a note. It was still there when we got back.

Plug these into GoogleEarth to get directions from your location.