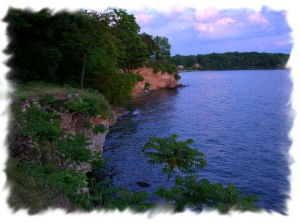 I had read about the rendezvous on South Bass Island from articles on P net for a few years, and decided to attend it this year. The rendezvous was scheduled for Friday through Sunday at the state park on South Bass Island. I decided to make more of a trip of it and start on Thursday morning. First I had to drive about 600 miles from Newton, Iowa to my aunt and uncle's home in Marblehead, Ohio. Their home is just two blocks from the lakeshore, and Kelleys Island is just four miles due north of there out in the lake. I had dinner with my aunt and uncle and got a good night's sleep there before beginning my trip Thursday morning.

I launched from the rocky shoreline of Marblehead about 8 AM Thursday in about one foot waves and a light SW wind. In an hour I covered the four miles to Kelley Island and then paddled the shoreline of the island to the NW corner of the island. Circumnavigating Kelleys Island would be around a 15 mile paddle.

From the NW corner of Kelleys Island, I could clearly see Perry's Monument on South Bass island about 7 miles away. The weather was good still with light SW winds that were forecast to increase later in the day, so I decided to skip spending time on Kelleys Island and cross to South Bass Island. An hour and a half later I was at the sea wall near the base of Perry's monument. It wasn't noon yet and I figured I'd paddled about 14 miles already.

After a brief stop I decided to continue paddling NE along the shore of South Bass and make the short crossing to Middle Bass Island. I followed the shoreline of Middle Bass to the arm of Middle Bass that is the NE portion of the island. There I found a nice ramp to pull out for a much needed time to rest, hydrate, and refuel my body. At this point I'd paddled about 20 miles.

The weather was hot and humid with scattered thunderstorms, a 30% chance of storms. Six miles from the NE tip of Middle Bass Island is Pelee Island, which is across the border in Ontario. I was very tempted to make the crossing as I loaded up again after my break until I heard the sound of distant thunder. Then I said out loud: "God, I think you're telling me not to make the crossing." 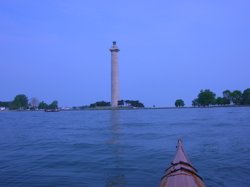 From there I paddled around to the north side of Middle Bass and made a shorter crossing of less than two miles to North Bass Island. The state of Ohio has purchased about 85% of North Bass Island, which had little commercial development, and plans to keep it as a primitive area. I circumnavigated North Bass and enjoyed it the most of all the islands. Most of the shoreline is in its natural state and a pleasure to kayak. While paddling around North Bass I paddled in a rain shower for a few miles, which was refreshing on that hot and humid day.

From North Bass, I paddled back to Middle Bass and around the west side of the island. From there I crossed again back to Put-in-Bay on South Bass Island. Put-in-Bay is highly developed. It has a big natural harbor with a lot of docks for power boats, and there were hundreds of them there. The town there is full of bars, hotels, restaurants, and shops of all types. After finding a place to pull out in the harbor, I went to a store and bought a two liter bottle of lemon-lime soda, and quickly drank half of it.

After the break in Put-in-Bay I began the three mile paddle around the west side of the island to the state park. The SW winds were increasing and the three foot waves reflecting off the rocky shoreline made the paddle to the campground a challenge.

I checked into the campground about 6 PM and settled in for the night. All the next day kayakers arrived at the campground, around 90 kayakers. Most of them came over on the ferry from Catawba on the mainland, about a three mile crossing, which is known for being very choppy and having a lot of boat traffic. That day I mostly hung around the campground and met a lot of friendly kayakers. In the evening we gathered together and had an excellent potluck dinner. 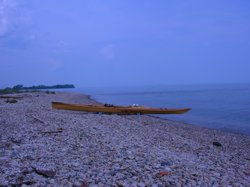 Saturday evening many of the kayakers drove or walked to Put-in-Bay to enjoy the night life. Three of us kayaked that evening to Put-in-Bay, but we stayed sober. We had to kayak back to the campground after dark in choppy water.

On Sunday morning we all began to pack up for the trip back to the mainland. Most of the kayakers took the ferry back due to the SW winds which were increasing, and the rough water. The water was warm and the air temperature in the low 80's, so I decided to paddle back across. A new friend, Randy, wanted to paddle across with me. The crossing was rough, challenging, and fun. At times the waves were large enough that we couldn't see each other.

Randy and I landed on a small beach area near the ferry dock and parking lot, where his car was located. After he left I had another 8 miles of shoreline to paddle back to where I started at Marblehead.

I figured I paddled around 80 miles and had a lot of fun doing it. Kayaks are well suited for paddling around the Erie Islands, and being there with other paddlers made it even better.

ADDITIONAL NOTES:
The western basin of Lake Erie is quite shallow. Thus the waves tend to be steep with a short fetch. There is a lot of boat and ferry traffic around the islands.

Camping fees for the campground on South Bass and Kelleys Islands

From Interstate 80 in Ohio use exit 91 and head north. Follow the signs for the ferry to South Bass Island. You can park in the lots for the ferry and launch from a small beach east of the ferry dock, or you can take the ferry across.

NOAA chart for the Erie Islands