by  KenE
A self-supported trip created by KenE 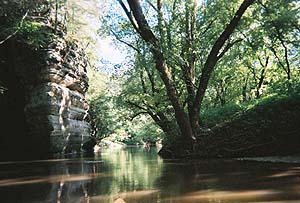 Water Level: Above average. No hang-ups on gravel bars. Numerous strainers, but easily avoided. Two log jams between Landing 12 and Bridge 13. I was able to paddle over the first. The second I was able to just barely snake through. Two more log jams between Bridges 17 & 18. Both I had to drag the canoe over the top and perform acrobatics to exit and re-enter the canoe. Still, 95% of the paddle was beautiful.

Campsite: Finding a site was very difficult. They were not marked well. Perhaps the recent flooding washed the signage away. The site I eventually found (H) itself was fine. However, the landing was tough. Boot sucking mud followed by a very steep and high incline. This site was just before Bridge 16 on river left.

Additional Info and thoughts: The banks were all boot-sucking mud. Portaging around obstacles was impossible because of this. I sunk in the mud up to my knees at the take-out canoe landing. I had to crawl a couple of yards till I reach firm enough ground to stand. Numerous groups, mostly families, were on the river between Ontario and Bridge 12. Things really thinned out after Bridge 5. I saw no one else shortly after Bridge 12. Saw no one at all on Sunday.

Cooked over the fire on Saturday night. Made a LARGE blueberry muffin using my reflector oven and 7" bowl/plate from my mess kit. On Sunday morning I used the esbit stove to heat water for coffee.

Used my Sawvivor for the first time. I was happy with it.