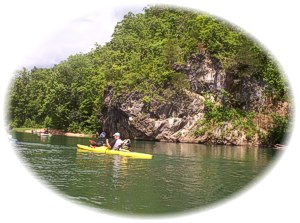 43 mile trip on the Ozark National Waterway from the Jack�s Fork River bridge at Eminence, MO to Van Buren, MO take out on the Current River.

Day 1:
We put in at the US 19 highway bridge ramp in Eminence, MO at 2 PM on Saturday, July 10th (mile 62). The Jacks Fork was crystal clear and very refreshing on this mid 90s afternoon. The river was, as usual, very crowded on Saturday, with hundreds of rental canoes, tubes and a few other kayaks. The scenery is beautiful as the tree lined banks begin to rise after a couple of miles to limestone bluffs. There are a number of riffles and rapids on this six mile stretch of the Jacks Fork, class I for the most part. The water was a little higher than average, and downed trees were the biggest obstacle, with one right hand snag at mile three dumping Gregg, Adam and Josh. Because of the heavy use of this part of the river, there is very little evident wildlife.

We went about a mile beyond Two Rivers, where the Current and Jacks Fork becomes the main Current River. There is a long rock island on the left that we selected as our campsite at around 6 PM (mile 57). A National Park Ranger stopped by our camp and reviewed the rules of the river and asked about our trip. Interestingly, he is transferring to the Obed National Scenic River in Tennessee, just a couple of hours away from our home. We cooked dinner and sat around the fire for a while before turning in early. It was a long day with the five hour drive to Van Buren, the hour shuttle and four hours of paddling. 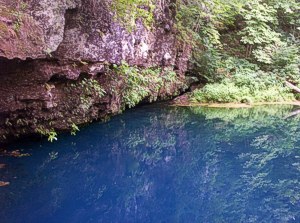 Day 2:
We broke camp and were back on the river just after 9 AM. It was a much more comfortable day, with clouds obscuring the Saharan sun for the most part. The heavy congestion on the Jack�s Fork was replaced by the drone of the 40 HP flat bottom boats used by many people on this wider and deeper part of the river. Some boaters were courteous and slowed down, but most didn't, leaving numerous wake waves for us to surf.

The scenery remained beautiful as we made our way to the Blue Spring trail on the left bank about a mile down river from Owl's Bend (mile 46). The spring is over 300 feet deep with an unbelievable blue color. The spring pumps in over 69 million gallons of water each day into the Current. The spring is protected ecosystem with no wading or swimming allowed. We got back on the river after about an hour of exploring to resume our game of dodge boat.

After stopping at about Mile 40 we continued down the every widening Current. We all saw our first wild bald eagle at about Mile 35. It first flew off down river before circling and then flying directly over us. Wow, what a sight! We ran into some of the strongest straight line winds I have ever encountered late Sunday afternoon as huge thunderstorms started to pop up all around. We got off the river at an island on the right bank around 6 PM, just before the skies opened up.(Mile 32) We managed to get dinner in between storms, but spent most of the night witnessing the lighting displays all around us. 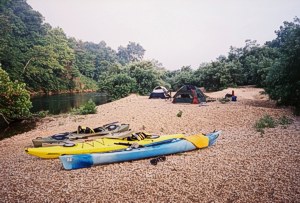 Day 3:
We were back on the water by 9:30 and did the last 12 miles in about three hours. The Current River flows very quickly, with a current just under 5 MPH. You can cover more distance in a shorter period of time than any other river I�ve ever encountered. The last 10 miles, signs of civilization begin to appear. There are many cabins and houses on the banks as you approach Van Buren. Watercress Spring Park in on the left about a mile before the Van Buren take out. (Mile 22) There is a cave on the right bank in the area as well. Most of the Caves along these rivers have been closed in an attempt to ward off White Nose Syndrome, a disease that is killing off the bat population in many areas around the country. The take out at Mile 20 is on the left just before the bridge.