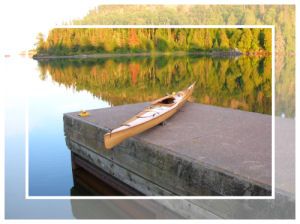 Having a break between semesters for a few weeks gave me the opportunity to make a Spring trip to Isle Royale. This was a solo trip where I planned to do the crossings by myself instead of taking the ferry, weather permitting.

Leaving Newton, Iowa, at 4:00 AM allowed me to arrive at Little Trout Bay in Ontario just across the border from Minnesota by 2:00 PM. A low pressure system had cleared to the East and a high pressure system was over the Western Great Lakes. Lake Superior was relatively calm with waves not over two feet, and a few scattered rain showers.

By 3:30 PM I had loaded up and was on the water ready to start my crossing to Isle Royale. There were some light rain showers visible in the area with visibility basically unlimited. Within an hour of being under way I found myself paddling in a slow moving rain shower that was moving the same direction I was. I paddled in this rain shower for about two hours the water temperature was 37 F and the air about 45 F. It didnt rain that hard and the light rain did not cause me to loose sight of either Isle Royale or the Canadian shoreline the entire crossing. I was wearing a neoprene farmer John wetsuit and a NRS Black Rock paddling jacket, so the rain and cold temperatures didnt bother me on the crossing.

I came through the North gap at Isle Royale, crossed Washington Harbor, and landed at the camping area on Grace Island. Shortly after I arrived on Grace Island I watched a picture perfect sunset, and settled into one of the shelters there for the night.

Wednesday morning I got up to a clear and breezy day, cooked up breakfast, and then paddled the three miles up Washington Harbor to the ranger station. There I checked into Isle Royale, paid my user fees, and told them my desired itinerary for the week. Then I paddled back to Grace Island, loaded up all my stuff and headed for the South shore of Isle Royale. Going to the North shore was not a good idea that day with building North winds. The waves on the open lake were about six feet that day, but I never paddled in any over three feet. The following seas I had as I paddled around Cumberland Point, Rainbow cove and the Head were not a problem and allowed me to make good speed. The skies were clear and the wind gusty and swirling as I paddled along the South shore that day. Paddling in the cool wind, under clear skies, and on cold crystal clear water was a delight. 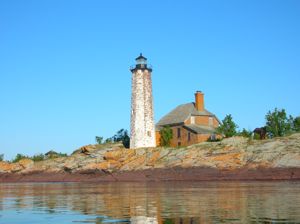 By mid afternoon I was resting, eating and reading on Long Point. My goal for that day was to get at least that far. After a good long break I headed on towards Little Boat Harbor, where I spent the night. I camped there one night six years before on my first circumnavigation of Isle Royale. It continued to be breezy and cold all that night, and the next day.

The next morning I loaded up and headed for Point Houghton, about three miles away, and planned to make the seven mile crossing from there to Malone Bay. From there I wanted to portage into Siskiwit and Wood lakes for some fishing. The weather had other plans for me. The conditions at Point Houghton were terrible with a lot of dangerous surf, white caps in Siskiwit Bay, and strong winds out of the NNE. I was forced to turn around.

I retreated back into Fisherman's Home Cove to take a break and decide what to do next. The wind was expected to keep up all day long, so I decided to turn back along the South shore. My new plan was to get back to Rainbow Cove and portage into Feldtmann Lake for some wilderness fishing. It was fast paddling back with a strong quartering tailwind clear back to the Head, then I faced a stiff headwind as I headed NNW up to Rainbow Cove. From the landing on the gravel beach in Rainbow cove there is an 0.8 mile portage back into Feldtmann Lake. The portage felt much longer than 0.8 mile, and there isnt an easy way to portage a kayak! By 5:00 PM I was at the small camping area at Feldtmann Lake, setting up camp for a few days, and preparing for some fishing.

The fishing was fun! That evening I caught two northerns over 30 inches, lost a few big ones, and caught some other smaller ones. I had that beautiful lake all to myself, and caught large pike each time I went out to fish it. The next morning I kept one of the large pike to clean and eat. The fillets from the fish filled my little fry pan six times, and theres nothing better eating than fresh fish from cold clean wilderness lakes. Id brought along a small container of olive oil and some corn meal for cooking the fish. I ate the fillets over a period of six hours that day. Catching the northerns from a 22 inch wide sea kayak is not easy! I had a five piece light weight graphite spinning rod with eight pound test line, and no landing net. You have to carefully play the fish and wear them out, and you cant hold the rod tip high unless you want to go for a swim. It really puts the sport back into fishing! That evening, Friday, I again went out and enjoyed catching more pike.

Saturday my plan was to fish in the morning, portage back out to Rainbow cove, and paddle back to Grace Island. The morning was calm and the fishing good again, but by the time I portaged out to Rainbow cove the weather was changing. I launched as quickly as possible because the seas were building, and I wanted to get around Cumberland Point before it got too rough. Soon it started to rain and continually got rougher, and by the time I rounded Cumberland Point the waves were over five feet.

After rounding Cumberland Point the waves were coming quartering off my stern, and continued to get larger. It was a dangerous three mile paddle to Grace Island from the point. I had to watch the waves coming from behind me very carefully, because the rogue waves and three sister combinations were large and dangerous. If I let up they would have quickly broached me and I could have been in a dangerous situation. The dark steep powerful waves seemed to come in sets that I had to carefully watch for and ride through, and then there would be a short period of smaller waves that I could sprint through to get closer to Grace island.

After getting to Grace Island I quickly changed and got dry warm clothes on. It was cold and the winds that afternoon through noon on Sunday reached gale force, with waves on the open lake up to twelve feet. Shortly after I arrived at Grace Island a sport fishing boat with three men on it docked up at Grace too. That morning they launched from Grand Portage to come over and fish for lake trout in Washington Harbor, and when they launched no gale warnings were being broadcasted, however, by the time they got to Isle Royale they changed the forecast to gale warnings. If they had known that would have happened they would not have made the trip. It was so rough in Washington Harbor Saturday noon through Sunday noon that they couldnt even fish in the Harbor! They were only able to fish for one hour later Sunday afternoon before having to go back to Grand Portage that evening.

I did a lot of hiking and exploring around Grace island to keep warm. The hiking was nice because the undergrowth had been matted down by the winters snow and hadnt grown back up yet. When the wind eased up some Sunday afternoon I paddled from Grace Island back to the ranger station at Windigo to report in, and tell them I was planning to paddle back to the mainland on Monday morning. Then I went back to spend another night at Grace Island.

The weather on the trip was cold, between 25 and 55 F, and I wished that Id packed more cold weather clothing. I needed the clothing not for paddling, but for when I was on land and camping. The wind and cold water made the trip a dangerous one. However, the cold May temperatures had good benefits too: no bugs, very few other people on Isle Royale, and great fishing!

When you check in at a ranger station on Isle Royale you pay a $4 per day user fee, and set up with them your itinerary for the trip.

"Guide to Sea Kayaking on Lakes Superior and Michigan" by Newman, Ohmann and Dimond provides you with a lot of good and necessary information and references for additional maps etc.