Inside Passage (Wash. to Alaska) in British Columbia 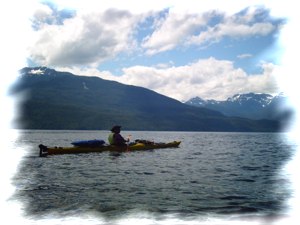 WILDLIFE ENCOUNTERS ALONG THE INSIDE PASSAGE

It was just another one of the hundreds of Stellar Sea Lions that I had seen so far on my kayaking trip through the Inside Passage. His head was sticking up out of the water, straight ahead and about twenty yards away. I assumed he had seen me, as he was looking right at me before silently slipping away below the surface. I was expecting him to be long gone, but a few paddle strokes later, as I reached the point where I had spotted him, he surfaced right next to me, about three feet from my right hand. At first, he did not see me because his back was towards me. Then, in a split second, he turned and saw me as my hand moved the paddle blade forward. The startled look in his eyes revealed his terror as he lurched out of the water like a missile. This huge animal, weighing around 500 pounds, came almost completely out of the water and did a backwards dive trying to get away from me as fast as he could.

This wildlife encounter, which took only seconds to unfold, is burned into my memory as one of the most unforgettable moments of my three-month long Inside Passage kayaking adventure. I was, at this point, 72 days into the trip, and halfway between Petersburg and Juneau Alaska in Stephens Passage. Humpback Whales were feeding all around me; the sounds of their breaths reaching my ears in stereo surround sound. Loud splashes of nearby Humpbacks breaching emanated eerily from the morning fog while I could only guess how far away they were and hope the next breach wasn�t too close by.

The previous night I had slept on Whitney Island, right in the middle of one of the largest concentrations of migrating Humpback Whales in Southeast Alaska. In the calm darkness as I lay in my sleeping bag, I could hear the slow rhythmic sounds of the Humpbacks breathing as they rested quietly at the surface. To be surrounded by so many giant animals that their individual breaths could be heard, was a truly incredible experience. 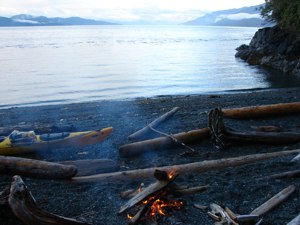 Earlier in the trip, I was two days north of Ketchikan and camping on a gravel beach along the eastern shore of Clarence Strait. As I was packing up my gear in the morning and getting ready to carry it down to the waterline, I spotted two black bears down the beach slowly making their way toward me. They were so busy moving logs to get at the Amphipods beneath, that they didn�t even see me until I started talking to them. I kept up a one-way conversation to let them know a human was near and hopefully keep them from getting startled. As I stood watching, they just stared back at me as I called, �Hey bear - hey bear�. I got out the pepper spray just in case they got too curious but they pretty much ignored me. I went about my business of packing up while keeping a weary eye pealed and talking to them. By the time I had carried all my gear down to the waters edge, they were both sniffing around the spot where my tent had been.

Having Black Bear come around while I was up during daylight hours was actually not a very scary experience. It would have been a completely different story if Yogi and Boo Boo had decided to come by for a midnight visit. Through out the entire length of my trip, no bears came into any of my campsites at night. I always tried to keep bits of food from dropping as I cooked and ate meals at camp. At night, I either hung my bear proof food canisters high in a nearby tree, or if there were no large trees around, placed them at a spot on the beach far away but still visible from my tent site.

I spotted pods of Orcas a few times on my trip, but none came close enough to make me fell threatened. They always seemed to be going somewhere in a hurry, probably chasing schools of Salmon that fill the waters of the Inside Passage at this time of year as the adults return to spawn in the streams where they hatched.

Wildlife encounters always seemed to come at times when they were least expected. When I was two days out of Prince Rupert, headed toward the US / Canadian boarder, I spent the night on a beach just past Port Simpson on the Tsimpsean Peninsula. After dinner, I was sitting on the beach filling in my logbook with notable events of the day. I heard a noise coming from the woods behind me and turned to see a deer leap out of the forest and run across the beach and out into the water. The deer then bounded through the shallow water parallel to the shoreline for a hundred yards before running back into the forest. This was very unusual behavior so I knew the deer was doing this for a good reason. Probably something was chasing it. I got out my pepper spray and camera and waited to see what came out of the woods next. 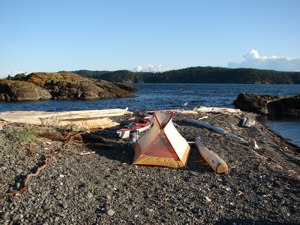 After waiting for around 15 minutes with bear spray in hand, nothing had happened. I figured my idea that something had been chasing the deer was wrong, so I put the spray and camera away and went back to filling in my logbook. Within seconds of sitting back down, a large wolf came running out of the woods and straight up to within 10 feet of me. I am sure he did not know I was there, because as soon as he saw me he turned in his tracks and ran full speed back into the trees. I did not get a picture of the wolf, but I was able to get some good photos of his footprints in the sand.

As I paddled along close to the shoreline, I saw clusters of bright purple and orange Sea Stars every day. Crabs, Anemones, Sea Urchins, and Clams decorated the coastal rocks and were never more than a few feet away. On an average day, I saw more varieties of sea life before lunch than many people see in a lifetime. 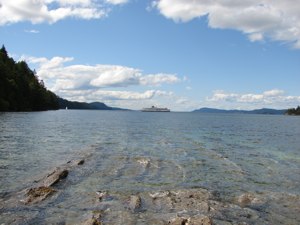 Throughout the trip, wildlife was everywhere. I saw Sea Lions and Harbor Seals, Orcas, Humpback Whales, Otters, Dolphins, and Eagles. Black and Brown bear showed themselves enough to be interesting without being scary. There were creeks full of Salmon, and fields full of Canadian Geese. Flocks of Guillemots, Grebes, Murres, Cormorants, Loons, Mergansers, and Harlequins covered the waters surface in many places and frequently put on a show for me by either diving out of sight or running across the surface before taking flight. Tracks in the sand showed me where big cats had walked near my campsite overnight without detection.

The memories of my Inside Passage kayak trip will always be with me. The scenery I saw as I paddled up the coast was incredibly beautiful. The people I met were friendly and helpful. The waterways provided a matchless kayaking challenge and the towns were full of interesting sights. The wildlife however, provided the most memorable moments of the trip.

For a complete day-to-day chronicle of my trip along with hundreds of photographs, video slide shows, and interactive maps, go to my website at denisdwyer.blogspot.com/

Must stop at US/Canada border

NOAA Charts, The Wild Coast Vol. 2&3, and Kayaking The Inside Passage