Illinois and Michigan Canal in Illinois

by  CD1
A self-supported trip created by CD1 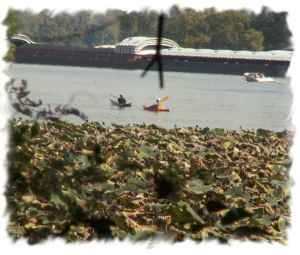 On September 20, 2008, I paddled the most exhilarating ten-miler of my life. Pnetter bruce guided a trip that was fraught with adversity, yet made everyone in the group appreciate that we are healthy and fortunate enough to accomplish this trip. Besides trip leader bruce, this late summer day tour featured trailmom and myself of Champaign, egnarts of Washington, magicpaddler of Lemont, guinness of Bloomington and, new to the group, madcubano from Palatine. Our distinguished paddlers had no idea what was in store on this 80F steady sunshine day on the historic Illinois and Michigan Canal.

We arrived at Channahon, IL to find our launch site chained off secondary to recent rain-induced turbid waters. An IDNR worker suggested Aux Sable, about 6 miles west. The Aux Sable put-in with its familiar lock tenders white saltbox-style house was our only option, and with it came a 125 yard portage to the difficult high bank put-in at the easterly section of the canal. Our septuplet several of whom met for the first time today gelled during tandem and solo kayak portages as well as boat dragging across the dewy grass to the launch, and we set out on the channel and across the aqueduct over the Aux Sable creek at 10:30AM.

Paddling a 20 foot wide canal that links Lake Michigan to the Mississippi River is unique in kayaking; the width is generally enough for two boats, and infrequently three. A paddler tends to drop back, and race forth, all the while conversing with various small groups of paddlers. It is not straightforward stroking, as would be a lake or large river. The muddy bottom is never more than 2-3 feet below the kayak, and many blade edges were tipped with silt from bottom hits during the trip. Breakouts on the canal sides formed large reflective ponds. Downed trees create a line that snakes up the man-made canal at a pace not over 3 mph. We never could hit a consistent stride in our strokes because of the constant navigation. The scenery was stunning, with the first peeks of brilliant reds like droplets of crimson blood on a green mosaic of leaves. A thick water snake basked on a branch jutting out of the muddy water, unmoved by the passing red, yellow and orange boats.

A decaying lily field directly in the channel met us before we arrived at the state park, appearing like leather helmeted defensemen guarding us from crossing the goal line to our lunch spot. The water was down at least two feet from when these huge fronds floated on the surface, and they now stuck up in the air with desiccated brown heads, serving as spider nestsand kayak traps. Like Holden Caulfield catching children running through the rye field, magicpaddler smashed through the lily patch to fade into the muck, with paddle blades wind milling above the lotus. We each, in turn, suffered through the same mess, choking on dry dust from the giant weeds. The instant one stopped paddling, their boat would halt firmly in the sea of stems. Guinness, trailmom and I, pulling up the rear, stopped cold as we no longer heard the others, and we had no vantage to see if the grotesque decaying field would ever end, or if wed be forced to turn back. A faint holler from bruce and magic suggested we proceed, so we slashed even deeper into the weeds, and finally came out on the opposite side, crusty and brown from the effort, our boats littered with flakes of parchment from autumnal lilies.

After a refreshing one hour break near the McKinley Woods Park walking bridge, snacking on dry fruits and dehydrated chips under a stone pavilion while a family barbecued thick and juicy burgers next to us, we debated on portaging across to the river but opted to continue east to Channahon, estimating a 1 mile paddle. Soon, however, a natural resources police officerafter frisking us verbally for our registrationsinformed us that Channahon was at least three miles east. He scoped a portage from the canal to the river, and we took his advice. A nonpaddler, he is, as the portage he gave us was lengthy and quite arduous through branches and over logs. Only teamwork and tenacity allowed this fatiguing group to continue.

The goal was to get on the Illinois River, paddle to Dresden Dam, portage easily back to the canal and thereby miss the dead lotus patch, and head home to Aux Sable.

The sun was bright and nudging westward by our mid-afternoon open paddle on the Illinois River. Although we could maintain a more consistent stroke than on the claustrophobic canal, joints were becoming stiff from the portage and slight dehydration from the 80 degree heat. Madcubano, host of lovely www.paddleaway.com, broke a Carisle paddle but was prepared with a spare, and our luck was to run out completely as the Illinois River swept us gently toward the Dresden Dam.

At take-out right, the ugly heads of another decomposing lily pad garden, at least the size of a Wal-mart parking lot, blocked our shore landing. Egnarts and magicpaddler had already taken out about mile back in what looked to be a rough portage, but they were, in the end, prophetic in their choice. We remaining paddlers were in for the most rugged take-out ever experienced in Midwest sea kayaking.

After trip leader bruce scouted a take-out that was "less than ideal" and a false start with madcubano checking a small area of trodden grass only to find inaccessible riverbanks, we all opted to thrash through the riverside lily garden and take out in the trees. We splintered off and guinness and I, the only paddlers in composite boats, smashed around downed logs and thigh deep water that was laced with boat fuel and floating garbage, only to drag our vulnerable boats over the fetid soup (vomiting was inevitable at one point) and then up through virgin thicket for 20 yards before getting to open ground and the help of trailmom, bruce, and madcubano, who fared similarly further downstream. Egnarts and magicpaddler were on the flats with a helping hand and an "I told you so" chuckle.

Reconvening on the brown I&M Canal, we had about 1.5 winding miles back to the take-out, and now all reeking of mud, sweat and lily dust, our boats scraped and filthywe had not a care in the world. We were untouchable. Indefatigable. We were one with each other, like a zany Outward Bound expedition that bonds souls with attitude and guts. We became one over bruces gift chocolate Trinidads, which trailmom had baked in her truck all day and now tasted like hot campfire marshmallows. Just for that instance, as we approached 5pm, I would have laid my life on the line for any one of my fellow paddlers. And they for me.

We repacked our sloppy boats, all smiles, and vowed to do it again this season, hopefully with an Indian Summer giving us warmth. Each driving home in separate directions, to separate families, linked once again by a thin thread of emails and paddling.com, we return to desks, to-do lists, bills; we settle back into a routine known as life.

"Anyway, I keep picturing all these little kids playing some game in this big field of rye and all. Thousands of little kids, and nobody's around - nobody big, I mean - except me. And I'm standing on the edge of some crazy cliff. What I have to do, I have to catch everybody if they start to go over the cliff - I mean if they're running and they don't look where they're going I have to come out from somewhere and catch them. That's all I do all day. I'd just be the catcher in the rye and all. I know it's crazy, but that's the only thing I'd really like to be."

- The Catcher in the Rye, J.D. Salinger

For one day in September 2008, we were, together, the catchers in the rye.