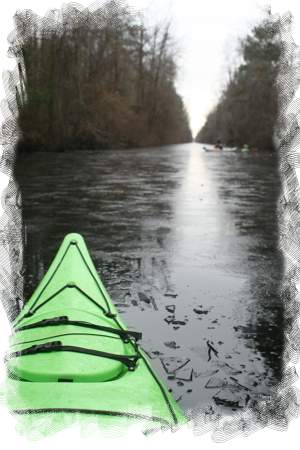 When my wife Tiff, our friend Trent and I decided we should kayak camp over the weekend I tried to be excited about it. But the last couple times I camped in winter I did so at a hot spring and had become spoiled, uninterested in winter camping without hot water. Still, I hadnt been kayak camping yet, even though thats why I bought a sea kayak. And Tiff and I had just bought a new zero-degree sleeping bag that we had yet to use. And we were thinking of going to the Great Dismal Swamp probably my favorite place in eastern Virginia. So after seeing Into the Wild we declared that we would go as the first chapter in our "Alaska training."

We started late from the Intracoastal Waterway boat launch just north of Ballahack Road. Having never loaded a boat for camping I took a while to pack. As we loaded our gear another more experienced couple arrived and launched in a pair of short boats. I didnt want to pack the boats in the water because I wasnt interested in getting wet in winter. But I had recently read accounts of boats buckling when people carried them loaded. So when we had finally loaded them we made sure to have the third person in the middle helping to carry each boat. I had heard that boats handle differently when loaded, but the only difference I felt this time was that my Sea Lion pulled a little to the right. I wondered if this was because it was loaded or because it was loaded badly.

The afternoon was overcast and the air was cold but we all wore plenty of layers. The forecast had called for highs in the upper 40s, but it felt more like the 30s. We paddled south down the Intracoastal Waterway, passing a friendly canoeist, and turned west into the Feeder Ditch. My wife and I had paddled here once before in the fall, when we found the Swamp verdantnot only with green but also with falls brilliant colors, with birds calls and other wilderness sounds and with isolation. That time the trees had scattered leaves on top of the water like rose petals leading our path. This time the leaves had all been scattered and swept away, the bare branches of trees and shrubs a forest of bony fingers reaching toward the grey above. 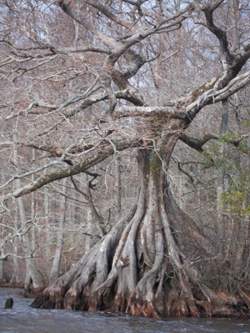 Ahead I could see patches floating on the water. Out of my preconceptions about swamps I figured it was some kind of scum or foam that had collected in winters lessened flow. As my boat cut into it, however, I heard the scraping in the hollows of my boat, and realized it was ice! Never having paddled through ice before I amused myself with its novelty, moving to the right side of the ditch where the ice thinned away and I could build up speed, then cutting sharply to the left to break the thickest sections. We paddled stretches on the right to rest, then stretches on the left to play, occasionally forgetting to punch holes in the ice with our paddles and losing momentum as they swept backward with no resistance across the ices surface. We all agreed that the ice made the trip feel a bit like an expedition. After a time we realized that paddling through ice is much harder than paddling through open water, and I thought of the end of our snowshoeing trip back home in New Mexico a few days after Christmas, when we walked single-file and took turns leading and breaking the snow. But before we grew tired enough to start paddling single-file the ice ended.

We arrived at the campground under a slightly pink sky. The manicured campground was a bit of a shock after the seclusion paddling in. Aside from the ditchs perfect straightness we had seen few human developments since we left the Intracoastal Waterway. The streetlights turned on after a few minutes to confirm that this campground is the one major knock against the Great Dismal Swamp being the best place in eastern Virginia.

We bundled up, set up camp and cooked dinner. Tiny ice crystals fell from the sky, then snow, then a mix. As we talked I threw twigs into the water to see whether it was freezing over yet but I hadnt noticed any ice when we went to bed. 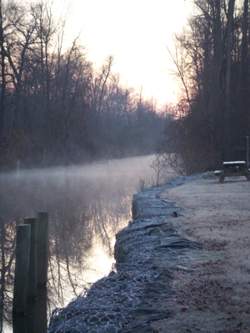 I woke early to a bright morning and got up to look around. The tent and rain fly were stiff with frost, as was the grass. A faint mist floated over a thin crust of ice on the water. I thought about paddling a bit because I have a thing for fog, but it wasnt thick enough to keep me from crawling back into the tent. After dozing for another hour or two I woke to a really nice morning. The sun was bright and warm and it looked like it would be a great day to paddle. We enjoyed a leisurely breakfast, as did a deer in the brush across the water. The deer stayed so long that my interest turned to other things and I didnt even notice her leave.

As we started to pack a couple of kayaks pulled up. They were as surprised as we were that anyone else had been crazy enough to come out paddling on a winter morning. We talked for a few minutes then they crossed over into the water behind the dam and headed to Lake Drummond. We finished packing as a few clouds rolled in and the wind picked up, then signed the log as "Supertramp" and headed for the lake.

The water behind the dam was glass I felt obligated to negotiate the few fallen branches silently. In the distance the lake water churned. Fortunately, when we entered the lake the water wasnt as bad as it had looked. Still, the whitewater boat I paddled this day was only 11 and the water tossed it around a lot and washed over the deck. I really wished I had brought the spray skirt! Thankfully the lip of my cockpit was just enough to keep the water out.

With little experience in swells more than a couple inches I was a bit nervous, but was close to shore and took advantage of the opportunity to expand my paddling experience. Paddling perpendicular to the waves wasnt a problem and swinging the boat around turned out fine too. After a few minutes I was having a blast weaving around the cypress trees and riding the small swell.

After a while I pulled next to Tiff and Trent on the lee side of a cypress, our bows parked among the waterlogged stubs that seem always to trail off from these trees. Aside from pictures Id never seen a cypress before our first trip here a few months ago, so theyre still full of wonder for me. I like being around them with their swollen bases that branch to make tunnels. And the stubs that surround each tree remind me of the hoodoos of the Southwestcurved and twisted by water as insistent as the desert wind, and leading like steps up to the cypress as if it were a mesa.

We enjoyed lunch in the trees protection then paddled back. I threaded my way past the last few cypress, back into the ditchs still waters. We carried the canoes around the dam and paddled away from the heart of the swamp. This time I noticed the power lines that line the dirt road next to the ditch the whole way. As we neared the Intracoastal Waterway the air grew colder and we spotted a couple small patches floating on the surface. We raced each other to be the first to cut through this last remaining ice.

The sky was pink again as we turned into the Waterway. The water was still and empty. I felt ambivalent I looked forward to resting, but not to leaving this swampy gem, not to returning to the city. As the light dimmed and the days colors settled into blue, I too settled. A few feet, a few yards, a few boat lengths behind my companions, I rested in the evenings sparseness extra noise, light and motion stripped away and stretched out these last moments as much as I could.

From the north take I-64 south through Norfolk and Chesapeake, then US-17 south toward the North Carolina border. Turn right onto Ballahack Road and right again onto the Canal Trail. The boat launch is almost immediate to the left.

Before the trip I looked at DeLorme's Virginia topo atlas, but it would be hard to get lost in the ditch.