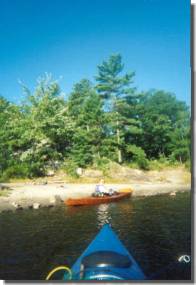 Probably the best way to describe the trip is to give a little history of myself, which would then explain what drew me to take on this "adventure"!

I was born in Germany in 1952; my father is Polish and my mother German. It had been my Fathers' dream to ultimately live in the US. So in 1954 my family immigrated to Sudbury, Ontario. The U.S. had a 6-year waiting list and Canada had none. My first cognitive memories are of Canada and the lakes, streams, and rivers of the Canadian Shield. As a young child, my father had taken me on many fishing trips all over the general area. It set the template in my mind of what an ideal forest and lake should be.

When the 6 years passed, we then immigrated to the US and settled in NJ. We did return to Ontario several times for vacations and repeated some of those fishing trips and again imbedded that template in my head. 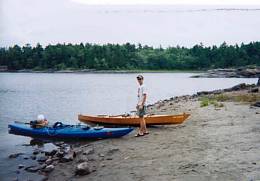 Now as an adult, I've taken up kayaking. In fact, I built my own kayak from a kit. I have a Chesapeake 17'. Remarkably my kayak is the first one I was ever in. I think that's called a leap of faith. Once I had completed the kayak I felt I needed to take it on an extended trip. Of course, to me the only place to go was to that "vision" that had been imbedded in my head when I was a child.

To make it more palatable to my wife, I told her my son and I wanted to go on a kayak trip. So our plans began in earnest. We were to go to Ontario and paddle down the French River and make our way to Georgian Bay. Which is exactly what we did.

We began our expedition at Hartley's Bay Marina on the French River. For a modest cost we were able to park the car, unload and launch the kayaks. We began paddling around 2:00 pm and decided not to go too far that first afternoon.

The Canadian Shield is an area of North America that had been scoured several times by glaciers. The predominate type of rock in the area we were paddling in is granite. If a giant hand would brush its fingers across the landscape, it would feel the texture of a washboard with the ripples running north to south. The movement of the glaciers had translated their passage to the granite. 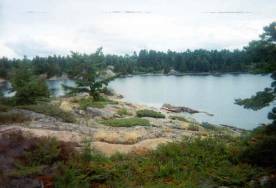 Because the bedrock is so close to the surface and in many areas exposed, the topsoil is not very thick so the flora that is predominant here are windswept pines, spruce, ferns, blueberries, birch and a host of wildflowers. It is a visually stunning area.

On our second day of paddling we leisurely made our way to Georgian Bay. We passed many dramatic rock formations, the pink of the granite often exposed due to winter cracking of the rock and other areas of the granite decorated with multicolored lichen and moss. The backdrop of the windswept pines and spruces gives the area a timeless quality.

As we made our way to Georgian Bay, we needed to portage the kayaks to avoid some rapids on the French River. Back at Hartley's Bay someone had directed us to the portage site. Fortunately we had good maps and a GPS which helped us pinpoint where we were and where we had to go. At the portage we found that some kind soul or souls had built a boardwalk to facilitate the portage and left a wheelbarrow for all to use. Portaging fully loaded kayaks was not an option. We managed to complete the portage in about 45 minutes. From the portage we paddled down what felt like a causeway into Georgian Bay. The sight of countless islands greeted us. With the sun low in the sky the play of light and shadow was spectacular! The windswept spruce and pine trees created shadows across the water and gave depth to the landscape.

Camping is allowed virtually anywhere on these islands. Only a few are privately owned with the balance deemed Crown land by Ontario. No trace camping is the rule here and seems to be working. The area we were in is known as the 30,000 Island area of Georgian Bay. In a relatively short time we found a beautiful island to camp on. It was secluded and bordered by other islands of various sizes. Our island was about 3 acres in size. The highest point was about 50 feet above the level of the lake. We pitched our tent on a bed of moss that sloped gently toward the water. The moss had a mattress like feel. On either side of the tent was a rounded rock wall that if needed would give us some protection from the wind.

As we unloaded our gear we set out the fishing lines. The fish jumping around us gave way to thoughts of having fresh caught fish for dinner. In no time we had caught several large perch, which I remembered to be a good tasting fish and it was. We managed to pick quite a few blueberries, which we had as dessert. As night fell we decided to retire early. 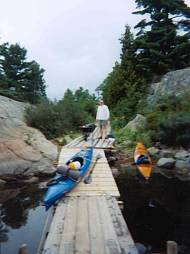 The next day we experienced a light drizzle in the morning and decided to stay put. The island felt idyllic and would serve as our base. We did some exploring of the island, paddled around the many other islands in the area and fished a bit. The fishing was great! Amazingly throughout the entire day we saw no one else. This feeling of solitude must be the way the Voyageurs felt when they explored and passed through this same area we were in.

We woke up on the fourth day to a foggy misty morning. We packed up and loaded the kayaks and made our way back to the portage. Despite the fog and mist, there was an eerie beauty to the landscape. The water was still, the granite mysterious and the lack of sound profound. As the morning progressed, the fog lifted and islands surrounded us again. We made our way across the portage and headed to a campsite we had spotted a few days ago that looked great. It was positioned at an intersection of four channels of the French River. From this campsite we could look upriver for miles and a short walk away we could view the other channels as they made their way to Georgian Bay. The campsite had a sand beach, and we were able to pitch our tent in a granite-enclosed glen on soft sand, fifty feet from the shoreline. We spent the balance of the day exploring the island we were on, picked more blueberries, and built a beautiful campfire with the French River in the background!

The next morning we had a spectacular sunrise, not a cloud in the sky. To see this campsite click on the site listed below.

We took our time packing up. Wanted to enjoy the campsite and the view a bit more. We gradually then made our way to Hartley's Bay to finish our adventure.

In a sense I feel I've come full circle with this trip. I was able to experience an area that had memories for me when I was a child. To see and experience this with the mind and experience of an adult has fleshed out this memory in my mind. It's as if my childhood memories of 40 years ago were black and white and now those memories have been transformed to full color.

This area of the world is a kayaker's dream; the many islands provide a buffer from the winds of Georgian Bay proper. One can paddle from island to island and rarely see a living soul. Wildlife is abundant, bears quite common so precautions need to be taken. We used my son's plastic kayak as a food storage depot. We attached a line with a mesh bag with a large rock in it too the stern of his boat. We then attached a long length of rope to the bow, pushed the boat out into the water then jerked on the bow line which caused the rock in the mesh bag to fall off the rear deck and act as an anchor. We also were fortunate enough to observe an otter, foxes, osprey, and a host of bird life. Highly recommended!

I paddled a 17' Chesapeake Light craft and my son paddled a Perception Carolina. We also got maps and info from Killarney outfitters. www.killarneyoutfitters.com

Fees for parking and Fishing Licenses.

Route 69 in Ontario towards Sudbury. Turn left at the first road past the French River Trading Post. Follow the road to Hartley's Bay Marina.