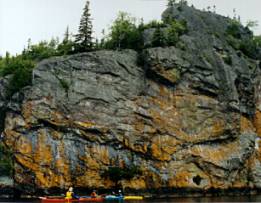 Driving down the long bumpy dirt road the energy in the van is almost unbearable. I am leading another Sea Kayaking trip in Lake Superior Provincial Park and we are almost to the put in point at Gargantua Harbour. The participants are buzzing with anticipation of paddling on the great inland sea, and I can't wait to paddle my favorite section of the Superior Coast.

The area around Gargantua has been used for thousands of years by Native Americans, Voyageurs, Fishermen, and now us Sea Kayakers wanting to get a taste of the spirit that has drawn people to its shores for centuries.

After packing and repacking the boats, some instruction and answering of last minute questions we are ready to set off. The group has feel silent as they test their new skills and ply the clear blue waters that has been paddled countless times over the centuries by people before them. Our first stop will be the wreck of the Columbus a 41-metre tug that went down in the harbour.

Gargantua Harbour was once the site of a small fishing village. The Columbus a supply tug was tied up to the docks on a cold September night in 1910. The nightwatch man suddenly noticed flames coming out of the ship stacks, quickly getting all the people on board off the boat the lines were cut and the tug floated out into the harbour now engulfed in flames and rested were it lies today in 15 ft. of chilly Superior water. Paddling over the boat gives us a eerie chill up our backs, although nobody lost their lives in the fire paddling over the boat reminds us of the countless lives that have been lost on this lake.

After viewing the ship it's time to paddle out into the open lake, rounding the large point we are faced with some great gently rolling 2ft. swells. Off to our left is Miron Island named after the lighthouse keeper that used to man the light on the island. The group finds it hard to believe that the lighthouse was washed off the top of the island in a November Gale. 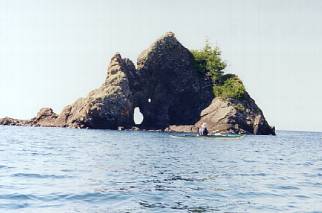 After successfully rounding the point and heading Northwest a series of islands can be seen off in the distance. The sun is hitting the large island just right and all the colours of the rainbow can be seen from the lichen growing on the 200ft. cliff. This is our next destination "Devil's Warehouse Island".

The island was named by missionaries who were trying to convert the Ojibwa of the area to Christianity. They thought by scaring the Ojibwa off their sacred areas it would be easier to convert them. Paddling closer to the islands sheer rock face I am hoping to hear the familiar cry off the peregrine falcon. We're in luck! A high-pitched Scrreeee breaks the silence in the air, scanning the cliff, we spot the bird perched on the branch of a dying white birch. For such a small bird their strength is unbelievable. Reaching speeds of up to 200mph when diving and being known for taking animals as large as porcupines we are amazed at this little fellow. Scanning the cliff someone spots the nest in one of the ancient sea caves high on the face. We decide to watch the bird for a while before taking a break on the small gravel beach below the cliff.

After getting out of the boats and getting our land legs back again, I lead the group to a large sea cave that is formed inside the soft Rhyolite rock. Once in the cave there is a special energy in the air. Maybe it's because this island is believed to be where the Ojibwa got the Red Orchre to paint the pictographs at Agawa Rock, or maybe it's the fact the ancient birch bark scrolls were found depicting the Midewin Society (the Ojibwa healing group) but this island is a very powerful place and I am always drawn here. Before launching again we leave an offering of tobacco in the cave and ask for safe journeys as we paddle the crystal clear waters of Gitchee Gumee.

We are now in the Tugboat Channel a small passage through a series of islands that protects us from the potential furry of the lake. But on this warm summer day we decide to take our time and explore in between the small islands. Cormorants and Herring Gulls curiously eye us as we paddle by their resting places on the contorted rocks the stick out just above the surface.

Just as we begin to leave the protection of the Tugboat Channel a small craggy looking black rock appears in front of us, this is "Devils Chair". Upon paddling to the east side of the island we see that the volcanic rock has formed what looks to be a giant armchair. This is the resting place of Nannabozho an Ojibwa Manitou. It is said that the giant manitou jumped across the lake from Thunder Bay and rested here in this chair. Wave action has gouged a hole in the back of the chair that is large enough to walk through. On a rough day walking through the hole is like walking into a different world as the backside of the chair is exposed to crashing waves and surf, while the east side is in full protection and the waters are calm and placid. 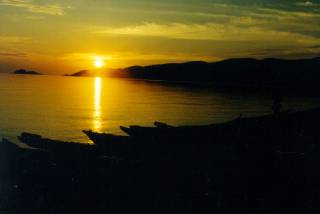 Voyageurs and Ojibwa would leave offerings of tobacco here to appease Nannabozho has he has the reputation of playing tricks on mortals by rolling thick fogs off his hands causing them to lose their way on the lake. Although it is a beautiful sunny day we decide to do the same as we still have a couple of days of paddling ahead of us.

Paddling back the way we came, we are headed for our campsite at Warp Bay a beautiful sand beach that looks out towards "Devils Warehouse Island". We get there and set up camp have dinner and talk about the day's events. We have just paddled an area that has been used for thousands of years and are camping at a site that was probably used by Ojibwa and voyageurs. Our sense of connection to all things is heightened and we go to bed under the glimmer of the stars and northern lights, fully ready for another day of exploration and fascination on this greatest of the great lakes Superior!

NOTES:
Care must be taken when paddling this area as large cliffs cause treacherous rebounding wave action between islands and of cliff faces. Also large underwater shoals are present and waves have a tendency to break on them without warning.

Gargantua is designated a backcountry area and campsites are marked on the Lake Superior Provincial Park Map. There are outhouses at all sites and a can and bottle ban is in effect.

A backcountry fee is payable at the road entrance which is $6.50 a night. You must have a permit to camp overnight in the park.

From Sault Ste. Marie, ON take highway 17 north about 2hours. You will be entering Lake Superior Provincial Park where road signs will mark the entrance to Gargantua. The road into Gargantua is a long and bumpy ride and will take approx. half an hour.

Lake Superior Provincial Park Map is a great asset as it indicates all sites and has good topographic features.

Superior Under the Shadow of the Gods: is a great history book about the Canadian Shore of Lake Superior.

Superior, Journey's on an Inland Sea, by Gary and Joanie McGuffin is their account of a circumnavigation of Lake Superior. Amazing photos along with great text make this a must.

Superior's East Shore: by Don Steers is another great history book about the area. Don spent years collecting stories from individuals in the area and complied a great book.