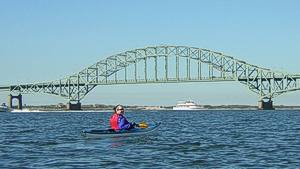 After hauling out and drying off in Mystic, CT (from a previous trip) we decided the next morning to hop on the Orient Point Ferry and paddle Fire Island, on New York's Long Island.

The ferry is a drive-on ship that leaves regularly from New London, CT; the trip takes about an hour and a half and is a much more pleasant way to go from CT to Long Island since it avoids several hours of driving through New York City. After driving off of the ship we made our way to Fire Island, a popular barrier island that provides miles of beaches and draws huge crowds during the summer. It took some time to do a full reconnaissance of the options since there are no roads on the island itself.

There are essentially two sides to the Island. On one side is the Fire Island National Seashore (FINS); this area provides a beach, parking area, and 22 miles of wilderness dunes. You can camp in the wilderness area with a permit purchased at the Ranger Station. When we arrived we saw a large crowd of surfers along the beach, and once we saw the waves, we knew why. Although we're used to the Pacific Coast's larger and more violent waves, Fire Island at low tide with a bit of wind is still relatively impressive due to several sand bars at different intervals from the shore that throw up large breakers. The 5-8 foot waves broke approximately 100 meters from the shore, then again about 25 meters from the shore, and then again on the shore itself. Launching in the protected waters behind the island is always possible, but if you want to do a surf launch, wait until high tide, when the beach in this area looks like most Atlantic beaches with moderate wave action. 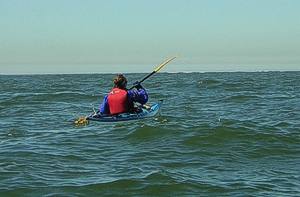 We then decided to try the other side of Fire Island to set up a good day paddle on the ocean side, where Robert Moses and Captree State Parks are located. Robert Moses is beautiful, but provides no launching facilities and does not allow launching from the beach. After conducting a thorough survey of the area we arrived the next morning and launched from the beach at Captree park, which is a perfect place to launch a kayak. We avoided the boat ramp altogether by doing this.

Our paddle took us under the arch of the Robert Moses Causeway and the tide quickly carried us towards Democrat Point, the west end of Fire Island. Several fishing boats ply these protected waters, but very few venture past the confused currents of the point. As we approached the point we saw large breakers moving in three separate directions in the vicinity of the Sore Thumb, which protrudes out from Jones Beach under the water and causes some very strange currents. Our charts marked this entire area as one that required caution, but just as we approached this churning area the breakers disappeared. The water had become just high enough over the sand bar with the rising tide to cease the breaking of the waves. With a sand bar creating large breakers another few hundred meters out, we were able to get some great surfing done before doing a relatively gentle surf landing on Jones Beach, taking a quick break, before punching back out to some more fast paddling.

One thing to note about this area is that the low tide turns it into a maelstrom of large (5-8 foot) breaking waves that move in every direction (literally) and confused currents that make it very difficult to paddle. If you time it so that you reach this area mid-way towards high tide, you'll have a great time vice finding yourself and your boat laying broken on a beach.

Charts for the area are recommended due to underwater features that create large breakers.