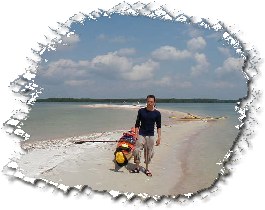 Left Corpus Christi at 12:30am Saturday, March 17 and drove 22 hours to Everglades City. Met Vlad early Sunday morning, scheduled trip with Ranger, and departed from the Ranger Station at 8:30am. Paddled two hours to Picnic Key (8 miles), stopping by briefly at Indian Key (5.6 miles) on the way. Saw some huge sea turtles in the water, and two fishermen at Indian Key said they had been seeing Manatees in the water all morning. Weather was sunny, warm, with light winds. Kayaks were fully packed carrying 15 gal of water plus other provisions. Shared Picnic Key Sunday night with two other parties: fishing family with powerboat, and Outward Bound group of 9 paddlers. The long beach provided all the privacy we needed. Unpacked, set up tents, went for a swim, and turned kayaks over and buried decks in sand to keep raccoons out of food and water in the kayaks. No problem with insects until no-see-ems swarmed out at sunset after dinner. Really enjoyed sleeping listening to the sound of the surf breaking on the beach that night.

Monday, winds and seas picked up, and weather radio forecast small craft warnings. Stayed on Picnic Key one more day, but did paddle around Tiger Key and surfed in the waves. Warm, sunny, but windy (20 mph winds). 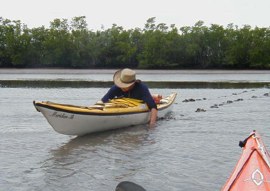 Tuesday was sunny and warm. Winds were blowing 20-25 with gusts to 30. Debated staying on Picnic or going to Rabbit Key. Opted for Rabbit, but when we got to Indian Key, winds and waves were so heavy Vlad was having trouble and we decided to go into the Ranger Station. Both kayaks were heavily loaded, so they were hard to handle in the waves and wind, particularly my Sitka where I had loaded canned goods in the very rear of the kayak. Had a hard time keeping it from broaching with a following quartering sea until I finally deployed the rudder. Surfed all the way back. Camped at the Panther Junction campsite south on highways 41 & 841($12.00 per night for tent with water and hot showers). Nice quiet campsite. No surf to listen to that night, but lots of wind rustling through the leaves.

Wednesday the small craft advisory continued with same strong winds. We kayaked from the Ranger Station up Halfway Creek, through the Mangrove Tunnel to Turner Lake, and then down the Turner River and back to the Ranger Station. Beautiful paddle through thick mangroves that met overhead. Lots of birds. We were well protected from the heavy winds, but not from the mosquitoes. . Stayed a second night at Panther Junction Campground.

Thursday morning we continued our Everglades paddle. Left the Ranger Station and paddled through boat canal on north side of Chokoloskee Island causeway. Although it was protected, we got stuck in mud flats during low tide. Gorilla walked the kayaks through the mud flats to reach the channel that hugged the north east shore. Real piece of work! No problems from then on. Reached Lopez Campsite on the Lopez River in two hours (8 miles), then paddled another hour (3 more miles) up to Sunday Bay chickee. Saw several very large black shark fins on the way. One of the fishermen had just caught a 9' Bull shark. Arrived at Sunday Bay chickee at 11:30am close to high tide so it was fairly easy to haul kayaks up on chickee to unload them and set up camp. Beautiful sunny day and evening. 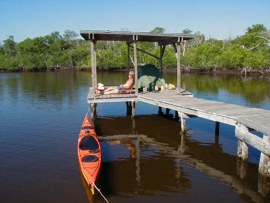 Friday lounged around in the sun, explored the mangroves, We packed up after lunch and headed for Lopez, having trouble finding the "Crooked Creek" return route after locating Marker 125. After a few false starts, we decided our first choice was the right one and it was confirmed as other power boats used that channel. Arrived at Lopez, set up tents, and had dinner on the beach with no insects until the sun set. But then there was the loudest howling of mosquitoes I have ever heard. Fortunately my tent was sealed so no problem. After about two hours, there was no noise at all and enjoyed a very quiet night's sleep.

Saturday morning had early breakfast and departure back. Great trip!

Take Fla #41E from Naples, south on #29 to Everglades City. Everglades National Park headquarters are there.

Pick up local charts at the Ranger Station.