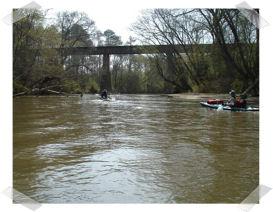 I was looking for a kayaking / camping trip to go on with four buddies. I laid out plans for three trips: Lower Savannah River, Enoree River or Lake Fontana. All were throughout the southeast, so we could make plans the week before according to what the weather decided to do. We then took a vote and decided on the Enoree River.

Not much comes up on a Google search of the River, except pictures of snakes and such on the Palmetto Paddlers website. I discovered the canoe trail on http://sctrails.net/Trails/ALLTRAILS/WaterTrails/EnoreeRvr.html and that was about as much information as I had on the destination.

It was about a 2.5 hour drive from Atlanta. We dropped off all the kayaks and gear at the Jones Bridge access. I gave Rob and Evan detailed instruction to pack the kayaks light and discard anything that we didnt need or was a duplicate. Pack like we are hiking I told them. In the meantime, Drew and I took the cars and parked my truck at the Strothers Landing access before driving back to Jones Bridge. When we got back, Rob and Evan proudly exclaimed that they had fit everything into the kayaks. We would regret this.

Once we got on the river my stress levels quickly went down as the river current was moving about 2mph and I figured 40 miles would be a breeze in a three day trip. Oh, how wrong I was. 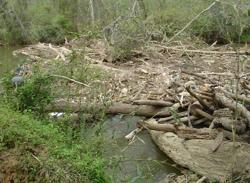 Three miles into the trip we learned the definition of portage. The river was blocked with what looked like a huge beaver dam. It was about 5 feet high and 4 yards thick. The banks were about 6 feet high and the next put in was about 50 yards down river. We pulled the kayaks and gear down river and put in again, everyone was tired and this took about 1.5 hours. The river had given us a shot over the bow. This trip was not going to be a breeze and now we were worried that we could have to portage ever couple of miles. We discussed our options: Paddle back up river or continue. We decided to give Enoree a chance.

I had learned from our Columbia sales rep that the Enoree had flooded earlier in the month (golf course was flooded - not happy with Enoree). Well, this lead to a lot of debris in the river. Trees were down everywhere which required us to paddle around them. All the debris made the paddling Intermediate/ advanced. There was a lot of technical paddling in trying to avoid obstacles. Evan, our beginner paddler got caught up in some logs and was pulled under. This happened to him twice. I could tell on his face that he was out of his element. Lucky, he only lost his camera and phone. I was worried about him and the rest of our group getting caught up under some logs.

As a result of Evans second spill we started looking for a place to camp. We had traveled 15.1 miles and I was feeling better about our progress. We happened upon an area that had tables and such. We were not sure if it was private property, but we decided to risk it. As soon as we had our camp all setup we saw a little boy on a 4 wheeler who was followed by his father to our campsite. I was thinking that we where going to get kicked out. The first question I asked was whether we where on private property. He told us we were at Petes Beach, a National Park area, and that the locals have been coming there for 30 years. So lucky for us we didnt have to pack up! 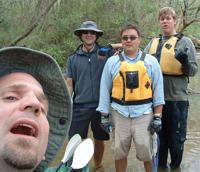 That night Evan got extremely ill, we thought it was the after dinner drinks, but it continued throughout the night. There was talk about hiking out and finding a house and getting Evan out. Luckily in the morning he bounced back and had no more problems. We chalked the illness up to a few gulps of water he took in when he got swamped.

The next day we packed the boats better and everyone got into the grove. We covered another 17 miles and had to portage 7 more times. The portages were not nearly as bad as the first ones we encountered, but they slowed us down.

Everyone was extremely exhausted, we made camp and everyone slept hard. The next morning there was a slight rain, so we picked up the pace for the last 6 miles and got to the car by noon. We picked up the second car and limped our tired bodies home.

Link to more Photos of this trip:
http://vanbeck.com:8080/Boating/Enoree%20River/album/index.html

Camping: Contact the District Office for information and a permit to camp along the river. There are several hunt camps along the way, equipped with water, toilets and trash containers. Some are open during the fall hunting season, others are open for spring turkey season and a few are open year round.