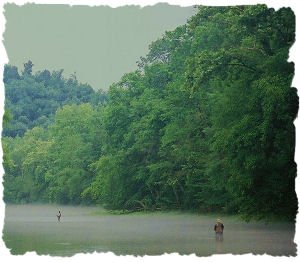 This was a 23 mile, two night and 3 day trip on the Elk River tail water, below and West of Tims Ford Lake. The Tims Ford Dam was built in 1966 and finished in 1970. Before then, the Elk River was similar to what most of would think of as a lazy creek according to one of the local farmers on whose land I spent the night Monday night. Unfortunately with heavy rains came heavy flooding in Fayetteville, TN and so the Tims Ford Dam came into being and exists as both a flood control dam in the TVA system and a power generator for the region. Elk River extends a long way ending at the Tennessee River near Florence, Alabama. Upstream takes you east to past Tims Ford Lake, so as you can tell, I was on a small section.

This section of the Elk River is west of Tims Ford Dam (Elk River mile 133) near Kelso, Tennessee and is a popular fishing stream for trout fisherman. It is one of these fishermen that first mentioned the Elk River to me. The Elk River is cold tail water that is oxygenated by a couple of processes; suffice it to say TVA is trying negating the effects of the dam on the ecosystem.

I was there to paddle and camp though and to do only a minimal amount of fishing. A good thing too, for when I got there I realized that I wasn't set up to be a trout fisherman anyway. Most of the locals are using anything from corn on a hook to both dry and wet flies. I came using the lures for red eye and bass. The water is sort of tough to fish on while kayaking because it is so fast (although it is being released only at a rate of 160 to 210 cubic feet per second when the dam is spilling for minimum flow).

I was set up for 3 nights and 4 days of primitive camping with gear and food packed into and onto my 17 foot Perception sea kayak. I took out after 3 days owing to the fact that I was right at my vehicle parked there by the good people at Elk River Canoe Rental. They were the ones that drove me to the dam and took my vehicle back to their property at river mile 110.

This was primitive camping. There are no amenities except what you bring; no campsites, no fire rings, and no garbage cans. With this situation comes added responsibility to pack out what you bring in.

The danger exists that the dam could generate up to 3000 cubic feet per second, a factor not lost on me when I came to choose a campground. Water levels raise 3 to 4 feet according to the locals; the high water mark is closer to 10 feet for a really big flood release judging from the debris on the shore. This was not clear to me until I got there. That made choosing a campground difficult because I had to scout a place high enough up the bank while dodging stinging nettles and poison ivy. 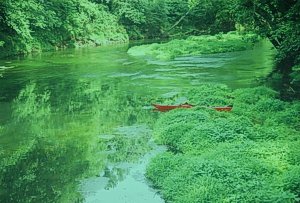 The water was clear and cold with a lot of visible fish activity. There was underwater "grass" that waved lazily in the current as I paddled by that was mesmerizing. One of the most exciting things about this trip is because it is in rural central Tennessee. There is not much in the way of human presence except farms that you pass and those are not visible from the river.

The nights were raucously filled with coyotes howling, beavers slapping water, deer snorting, owls hooting, turkeys walking about, and raccoons fussing. What a night at the zoo! I had forgotten what a real starry sky looked like, it was simply dazzling. The big dipper, Serpens, and the Milky Way were out there for all to see that night if you were standing in the middle of a hay field in Lincoln County at 3 a.m. (the zoo sounds kept me up).

During the day time one could see blue herons, king fishers, muskrats, hawks, turtles, bluebirds, deer, and several species of fish. I ended up catching a trout and two long nose gar of all things.

The water depth varies from shallow shoals to deep pools. The shoals will be tough on the bottom of your kayak so be warned. There were several places where I didn't paddle and just used my rudder to guide me because of the current. Other places were too shallow for a rudder so it was good practice for paddling without my rudder.

This area was once Davy Crockett's stomping grounds and there is a gravesite near Beans Creek of his first wife. As I floated down the river and camped, I wondered if Davy had ever been by this place.

Even though I had a great time, I probably am not going back to camp in that section simply because of the risk that exists when the water rises without much warning. This wasn't very evident from any source before I went. The water can rise in as little as 10 minutes and I for one don't want to be on it when it turns from a quaint trout stream to a torrent. The downed trees on the river bank and strainers are testimony to the waters force. I think a float trip is in order in which I could paddle past Fayetteville, maybe to the Tennessee River at River Mile 00

You can call ahead to find out if the dam is spilling from the flood gates at 423-751-2264, then 4 for the water release schedules and 50 for the Elk River and listen to the whole message. One source says it takes about 4 hours for the flow to get back to normal.

The canoe rental businesses on the river keep close tabs on the generating schedule which can change from day to day, but if you are camping this information won't do you much good if you have to leave the campsite to get back to a destination. I recommend going for the day or floating through this section, you will have a great time.

If you are interested in my menu read a little further.
For the mornings I had prepackaged baggies with oatmeal, pre-cooked bacon, and a fruit cup, with instant coffee. Maybe a little boring but remember I am taking everything back out so this is a lot like backpacking with a kayak. Lunches were simply an energy bar. Suppers were a one pot affair with instant mashed potatoes (just add boiling water) mixed in with some canned beef (already taken out of a can and put in a baggie) and stuffing mix (again just with boiling water) and some vacuum packed chicken, apple sauce, and some cookies. I brought a collapsible chair, camp cookware kit and a gas backpacking stove to round out the food preparation and comfort. Of course there was the usual gear like sleeping bag, sleeping pad, tent, and fishing rod with some tackle among other things.

Bathrooms and camping at Elk River Canoe Rentals.
No accommodations other than public ramps.

I-24 East or West to Exit 127 just west of Monteagle Mountain, and west along US 64 to either Tims Ford Lake or Elk River Canoe Rentals.