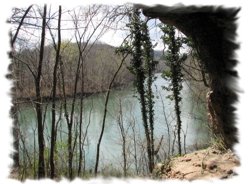 A Journey down the Eleven Point River (Thomasville, MO to Woodys Boat Landing (just inside Arkansas).

When the days are getting longer and the weather warms up it is hard to stay home, knowing well there are rivers that can be paddled. So in late March four of us decided to take a run down the Eleven Point. We contacted Richards Canoe Rental for a shuttle and they were glad to help us.

We arrived at Richards Canoe Rental at around 9 am to pick up a driver and continued heading up to the Thomasville landing. We unloaded the canoes from our van and loaded them up with our packs for a four day journey. The launch site was unfortunately littered with fish remains (filleted out suckers). I had no idea people eat suckers! We rapidly loaded our canoes, being careful not to step on the fish carcasses and headed down river.

It was a beautiful sunny day; the river was small at this location, about 10 ft wide and a few feet deep at best. A few miles down river we encountered our first obstacle of the day; a fallen tree across the river. The obstruction was located at a sharp river bend. Fortunately for us, only a low gravel bar separated the bend. We jump out from our canoes and dragged them across the gravel bar.

We proceeded down river for a few more miles and encountered another obstruction; again a tree had fallen across the river. This time though, the river bank was high enough and we were able to paddle under the fallen tree. The current was not very strong in this river section and it seemed we were not making good time. The scenery thus far was nothing particularly special; rolling hills with gravel bars and occasional shallow areas where the canoes would drag on the bottom. The outfitter that shuttled us had warned us of another obstruction that was in the process of been removed near Cane Bluff. Fortunately for us when we arrived at Cane Bluff the tree was gone.

We stopped for lunch and made a small fire to cook up a few Wisconsin brats and very much enjoyed the beautiful weather we where having. The temperature was just perfect for paddling (high 60, low 70). We paddled almost to mile 15 and then decided to put up camp for the night. Finding a good camp site on the upper section of the river was fairly easy, even though it has less gravel bars as compared to the Jacks Fork. We made dinner (steaks with camp fries) and settled in for the evening around a nice camp fire.

As the evening went on clouds appeared in the sky and the possibility of rain became very real. We secured our canoes high upon the shore and covered all our packs for the night. Our planning was not in vain, during the night we had a good rain storm that lasted a few hours. 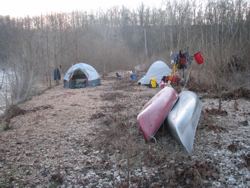 We got up at 6:30 and made coffee, the two younger crew members (14&15) were slow in moving but we eventually got them rallied up and out of the tent. The rain was over and the sky was clear again. We stated the day with a good breakfast and by time we were heading down river, it was 8:30. Shortly, we passed under the Hwy 19 Bridge where Greer Spring and Eleven point jointed together. The impact of Greer Spring was significant; the volume of the river almost doubled and current started to pickup as well, the scenery also became much more interesting with more bluffs and crystal clear water.

We tried to paddle upstream into Greer Spring but the current was strong and it also became very weedy, so we decided to press on. I regret now that we did not walk upstream to explore it further.

The reed buds and the dogwood were in blossom, spring was knocking on the door. We moved on, but made sure to stop at several interesting springs that sprouted out of the rocky bluffs. We also explored several caves on the way and made an interesting stop at Turners Mill.

The weather was better than anyone could have expected it for this time of the year and some of us were even showing signs of sunburn. The current was strong and ever so often we had a few challenges such a trees in bends or boulders to dodge.

In late afternoon we arrived at Booze Mills and ran the right branch around the island. This is the location that was marked for a small ledge type rapid. As we approached the drop, a nice tongue on river left was visible, we both ran it at that location with no major problems. However, in retrospect running the ledge center left would have been a better option. Although we did not have any major problem running it this way, we both found a boulder nicely located on the bottom of the drop that almost brought us to a stop.

We pressed on, and after we passed under Hw 160 Bridge, we started to look for a camp site. As we left the national forest we rapidly noticed the numerous No Trespassing signs. In addition the gravel bars were practically non existent. We proceed down river still looking for a site, we made several stops, and unfortunately none were suitable for camping. Eventually we found a mediocre gravel bar and decided that this was as good as it was going to get.

The wind had picked up and roared over our little island which made it difficult to set up camp. We eventually secured our tents and proceeded to cook dinner (pork chops and potatoes). We were all very tired, we had paddled far more than we intended to for today (28 miles). We gazed at the stars and listened to the frogs calling their mates. Eventually, we let our fatigue take over as we disappeared into our tents.

As the day started, we were woken up to the calling of wild turkeys. During the night the wind subsided and a light fog was now emanating from the river. We loaded our canoes one more time, fully realizing that our trip would end today.

The current was still very good, the bluffs were now replaced by hills and pastures and the water also lost some of its clarity. As we approached Hwy 142 we encountered our first motor boat, it slowed down as it went by and we appreciated that.

We passed under the Hwy 142 Bridge and stopped for a snack at the picnic area just after the bridge. We were greeted by two friendly stray dogs that were hoping for a treat. After our break we continued our journey down the Eleven Point and were now crossing into Arkansas. To our surprise we were unexpectedly greeted by a nice CL I rapid. We paddled for few more miles and finally arrived at Woodys Boat Landing where our van was parked. 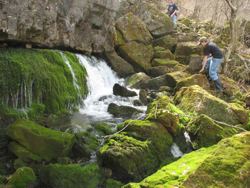 The Eleven Point is a great river to start the quest of the Ozark river exploration, it has its own special attributes such as good current, some very nice springs and caves, crystal clear water and just the right amount of bluffs to keep your interest.

The most scenic part of the river is between Greer and Hwy 160. The rapids we encountered (2) should be fairly easy for anyone that has a minimum of water reading skills and can keep a canoe straight. The biggest challenges are the trees laying in the river on the tight turns.

We encountered two motor boats near Hwy 142 and did not see any other paddlers. The wilderness camp sites are difficult to come by below Hwy 160. The wildlife we saw on our journey on the river consisted of eagles, turtles, water otters, an armadillo and a few snakes.

Not as spectacular as the Buffalo or the Jack Fork but certainly worth doing.

A Paddler's Guide To Missouri