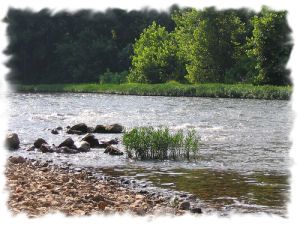 Left this morning at 6am from the house to meet Nolan in Salem. We left my car at Wal-Mart and loaded his up for the trip to the river. We put in at Cane Bluff around 2pm right in the heat of the day. This was my first overnight trip with my Tsunami 125 so I was pretty loaded down and curios to see how she handled.

This upper section of the river was surprisingly narrow (Im talking some spots 3-4 wide) But it was also very pretty and the woods were filled with green. The smallmouth were biting for me, but I hooked nothing bigger than about a 10-11" every now and then. Nolan figured out this new jig called an "eakins jig" that put him on some pretty big fish. The problem was, I was so impatient and have trouble fishing those slower lures I didnt even get to see his fish until he showed me the pictures. Once I saw the pics I must admit I was a little jealous.

It did seem like this upper section went from really narrow chutes to long slow pools for most of the day. This section was a pretty easy float with no real challenges or obstacles to avoid. We decided to camp about a mile upstream from Greer Spring for the evening around 8:30. We settled in with a small fire, a chicken and rice foil pack and had a few Rum and Cokes, Vodka and Redbulls and we were sawing logs in no time. We traveled about 6 miles today in about 6 hours.

Sunday, August 3rd:
Even thought the day was hot, it was real comfortable sleeping last night. Got up around 8 and had some scrambled eggs and lil smoky foil packs for breakfast. We had to wait for the fog to lift before we could go anywhere. Soon we came across the entrance of the Greer Spring branch on river right. It is unbelievable how much water is pumped in everyday and how cold it is. We decided to do some wading and fish for some trout here. I caught about 8 in an hour and I know Nolan caught about the same. All mine were a decent size and mostly Rainbow. What a difference the spring branch makes in this river! I could not believe how fast and full it was the rest of the trip. The water remained cold, which hurts smallie fishing but the trout were still biting.

We had been anticipating the rapids at Mary Decker Shoals, however when we arrived. Umm well, there just wasnt much of a rapid?? After this we ran into a lot of Jetboats!! It seemed like they were running a shuttle service there were so many zipping up and down the river. This section of the river had a lot more bluffs and scenery in my opinion and was just beautiful to float. As we started to look for camp, the fog started to settle in on the river and it was unbelievable looking. It was only about 5 foot off the water, but it just made things seem so pretty.

We settled in right after Greenbriar float camp on River left. Tonight it was traditional foil packs with a little Bud Light, PBR and the last of our Rum and Coke. The biggest memory of the night was these little black bugs that just attacked us for about 2 hours. They were real small and rolled up into a ball when you scraped them off of you. Today we traveled about 16 miles in about 10 hours of floating. 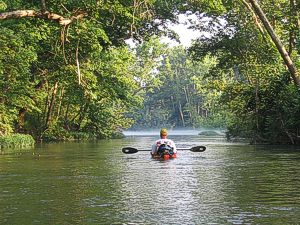 Monday, August 4th:
Last night actually got chilly so it was real comfortable!! We had to wait for the fog to clear again before we took off. Our goal from day one was to be off the water by 10am so we could both get home at a decent time. We had some pancakes and took off for Riverton. Nothing real exciting today on the river- However we did find some fishing line hung up in a tree and it was dangling in the water. On the end of the line a bat had gotten hung up and was dead from drowning.

Well, the uneventful day changed when we came around the corner and hit a major ledge and drop off. We didnt even scout it, but we stayed river right and it was actually quite a ride!! If we would have gone river left, it would have definitely been some big waves and a fun ride as well. This is the biggest rapid I have seen on an Ozark stream. I cant remember the name of it though??

Believe it or not we arrived at the bridge in Riverton at 10 on the dot- The funny thing is our car wasnt there for us- Oh well, we can wait a few minutes.. well at 30 minutes we asked the Parks Department lady if she would call Richards canoe and let them know we were there. An hour and 20 minutes later were both pissed and cussing the rental place. Nolan decides to walk up the parking lot and "Ill be damned" theres the car. It has been here the whole time and we managed to not think about looking in the parking lot. Needless to say the trip ended with a little humor and laughs at ourselves. We traveled about 6 miles today in about 3 hours.