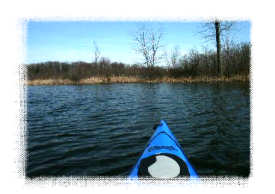 Great early season trip on one of my favorite quiet lakes. Duck lake is located in mid Michigan, about 5 miles from Carson City, and just outside of Crystal.

Duck Lake is the little brother of Crystal Lake, and this early in the season it was lovely. The put in was a state provided ramp, which during the summer is clogged with fisherman and pleasure boaters, but in early April I was the only car there. Duck Lake provides great opportunities for bird and wildlife viewing (See included photos). During the summer I would not recommend a solo kayaking trip on the Duck though. For that reason and the slight south wind I rated this a moderate trip.

I paddled out around the north side of a small reed island directly across from the put in, following some geese and mallard ducks, in the lee of the south shore I thought it was a perfect day. Then turning east after the island and into the open lake, I took some small rolling waves on the bow, nothing more than 1-2 ft, but enough to test my rusty skills. Heading east along the shoreline offers some nice views of housing and some reed beds, still plenty of solitude. After a about a 1/4-1/5 mile made a turn to the north, and headed into the mostly undeveloped north end of the lake. Nice lee along the west side of the lake as I played in some reed beds, and also watched a few birds nesting.

Making the run from the west shore to the east opened me up to some pretty hairy waves rolling the full length of the lake, nothing unmanageable, but wouldn't want to try this on a BAD day. Once reaching the east shore, I came across some nesting swans (god forbid the most horrid sounding birds on earth).

Paddling along this shore with a southern wind was a good time to learn using a new rudder, and also to adjust gear better before getting on the water. Had to deal with a lot of weather cocking. After following along a few more wooded and reed shorelines, decided to run directly west across the lake back to the reed island. Thankfully duck isn't too deep, or the waves could have been much worse.

The run was exhausting for someone out of shape, and definitely wouldn't suggest it be tried solo in much more wind. On the lee side of the island where I could relax again, ran across a nice muskrat that was out for a swim. And when I say ran into, I mean he HIT me. Came up from under and hit the bottom of the boat, but left me with some nice photos.

All in all it was a nice two hour paddle for the early season; very relaxing to be the only boat on the water. During the summer look out for jet skis and pleasure boats. Otherwise it's a lovely little lake. Also very shallow and can offer some great fishing during the summer.

From Carson City, take Mt. Hope road north, take a left at Garfield rd, then right onto Mt. Hope. Go about 4-5 miles and then take a left onto Colby road, which will curve around the lake, take the first road on the right, and the launch is right there.