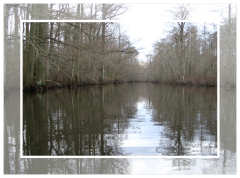 We put in just up from the bridge which got us another 20 some minutes of paddling. We encountered duck hunters with in five minutes. We paddled by them and their decoys and observed a bald eagle on what looked like a trial run on the decoys. We both would have liked to see the eagle snatch one of the decoys out of the water.

The river/ channel here is pretty wide and deep. It continues this way about 250 yards past the bridge and then goes to a smaller channel, but definitely paddle able with a 16' canoe. Friends of the Dragon owns land on the north west side of the bridge. They have a kiosk there of what you might find on the Dragon. We came to the first and only portage of this trip: a blow over. No big deal, we simply pulled the canoes about 20' and back into the swamp. The channel is pretty simple to keep up with if you look at which way the water is flowing. (There are some spots, near/after large beaver dams that the swamp empties itself on all sides and then flows back into itself down swamp.) These areas can be difficult areas to stay with the channel.

Just take your time and visually scout the options. (Also, look for where the blow overs have been cut to re-open the channel.) It is important that you stay with the channel or you might spend the night in the swamp. This would be a good time to explain that the Dragon is well isolated with very few residences or road near by. I have read/heard that on average it would be a minimum mile walk through the swamp to get to a road or a house. 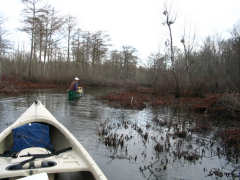 Next we came to what is called "Little Island." It is important that you go left at this junction. It appears that the channel goes right because there is much more water to the right. There is a small yellow arrow pointing to the left nailed to a tree on the island. Go left, through the small channel. (my guess is that Friends of the Dragon put the signs up.) This section is narrow and winding which snakes between the Little island and the Big Island.

Soon we came to the "Big Island." Friends of the Dragon also own this island. There is a small dock and campsite on the north end of the island. They have another campsite on the southern end of the island. A trail circles the island which we walked. We observed several deer rubs and a ton of birds. This island was used as some sort of base of operations for a lumber company. The remains of an old steam saw mill are on the island along with the well it used for water. A light rain started as we ate our lunch near the southern campsite. We signed the guest logbook and then head back into the water. Keep in mind there are bald cypress tress all along the way with a few really large ones. I counted 9 plus beaver lodges during the trip. We crossed several beaver dams all under one foot in height.

As we paddled we saw more eagles, beaver lodges and dams. Towards the end of the float you will come across a new home right on the swamp. Just past that you will come to a really tall and old cypress with a huge eagle nest in the top. The eagle was on a nearby branch. It was a great sight to see.

We paddled on and reached the New Dragon bridge. Friends of the Dragon owns the land at the take out and there is another kiosk and trail around the property. We loaded the canoes and gear in the truck then headed back to the put in. This was my first trip on the Dragon and I have to say it was great. Plenty of wildlife and a very wilderness feel to the swamp. I can see me doing this stretch often. I plan to paddle this stretch again and camp over night on the "Big Island."

See more photos of the trip.

"Friends of the Dragon" have areas at both put-in and take-out.