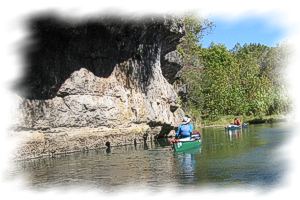 This October, eight of us from the Bayou Haystackers Paddling Club based in SE Louisiana decided to take a week and tackle the Current River in Missouri.

The Current, formed by confluence of Pigeon Creek and Montauk Spring, begins in Montauk State Park in southeastern Missouri, flows toward the southeast, and empties into the Black River at mile 184. The upper waters (the first 85 miles or so), along with its tributaries, are federally protected as the Ozark National Scenic Riverways, the first national park in America to protect a river system. As such, it is administered by the National Park Service, which maintains campgrounds, access points, and fresh water sources along the river. It is mostly spring-fed, which means that not only does it stay at a constant temperature of 58 60 degrees, but the flow remains mostly constant, as well.

While not a white water river, it does present a few challenges, nonetheless, to paddlers. The River is very scenic, with crystal clear water, a relatively fast flow, limestone cliffs, frequent gravel bars, underground springs, caves, an abundance of bird life, as well as a great variety of trees. While it seems to be fairly heavily used in the summer by fishermen and boaters, our group encountered only a few other canoes over the course of our 5 day trip.

Due to trout fishing in the River, canoes are not allowed within the Montauk State Park boundaries, so our group put in at Tan Vat, just below the Park, and camped at the Eagles Nest, a private campground a few hundred yards from the put in. While not ideal, we were able to carry our boats to the river, and our campground host assisted us in transporting our gear down to the river in his van.

We had driven the cars up to the take-out point the day before, and used Two Rivers Outfitters (www.2riverscanoe.com/) to shuttle us back to the campground on the afternoon before launch. The Tan Vat access point doesn't always appear on maps (or GPS), which led to a week long "discussion" regarding how many river miles we had actually paddled.

On some maps, Baptist Camp is listed as the first access point, which is a few miles downstream from Tan Vat, and river mileage starts from there. Well, at least this dispute gave us a break from arguing about paddles, boats, stoves, socks, or any of the thousands of things that paddlers can come up with to pass the time. 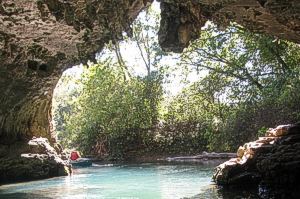 We arrived at the campground after dark on Saturday, at the same time as did a cold front. Sunday morning temps were below freezing, which wasn't the 80+ degree weather that most of us had left behind. Fortunately we had been warned, and most of us had brought sufficient layers and warm sleeping bags to stay pretty comfortable. It slowly warmed up over the course of the week, but it made for a few cold mornings on the river.

Sunday was spent making final plans, running the shuttle, and gathering firewood for the night's bonfire.

Monday morning we managed to get onto the river about 10 AM, settling into a routine of paddling an hour or two with a break, and usually stopping for the night around 4 or so. This gave us a couple of hours to set up camp, gather firewood, and eat. We managed to cover about 11 miles per day, paddling at a very leisurely pace, and averaged about 3.5 miles per hour while on the river.

One surprise on the first afternoon was due to a "low water bridge", which allowed the water to go through small culverts, but made it necessary to portage our loaded boats up and over the structure. We lost about an hour here, along with a good many calories, in this project. To avoid this obstacle, it would be advisable to use Cedar Grove as a put-in point, which also has a campground.

Among the highlights of the trip were the old Welch Hospital and Springs, the Cave springs, and the bald eagle that flew over our campsite across from Bee Bluff early one morning. Even though we dragged our feet on the last day, we took out at Two Rivers on Friday afternoon, as planned. Free hot showers were available at the campground, and after cleaning up, we had a farewell dinner in the town of Eminence at one of the local restaurants. It was the end of a remarkable 5 days of good weather, beautiful scenery, and good paddling company.

Montauk State Park is 140 miles from St. Louis. Travel west on I-44 to Rolla. Exit onto U.S. Hwy. 63 south. At Licking, turn left onto Hwy. 137 and follow it through town for three miles. Turn left onto Route VV and travel 10 miles to Hwy. 119. Turn right and enter the state park.