I love coastal North Carolina. It seems that every trip finds a new treasure. Merchants Millpond State Park, where the most frequent adjective is a gem. It is.

The do-it-yourself delights of the South River and the Black River 160+ miles of prime blackwater swamp, old growth cypress, pine barrens and nearby pocosin peculiarities. Theres a lot of paddling waters just in Bladen County alone.

And now add to that Hammock Beach State Park. Another gem of the highest magnitude.

One thing Merchants, Lumber and Hammocks Beach all have in common is an extraordinarily helpful Ranger staff. Either North Carolina is doing something right in training and cultivating their Park Rangers or its just southern hospitality at work, but the rest of the country could learn something about Park service gentility and diplomacy from NC.

But before paddling the entire family will pay my dues for not completing my independent study senior thesis, now tentatively titled Why the hell am I still hanging around with my old biology teacher?. It is a question my sons asked many times, at least until they met Dave Lee. Having met him they are now even more perplexed, but they dont ask anymore. Chalk up another one in the Dad is Strange column.

So first its off to the Tortoise Reserve for a couple or three days of community service um, service learning hours er, volunteer work ok, lets just call it reciprocal paybacks and manual labor. 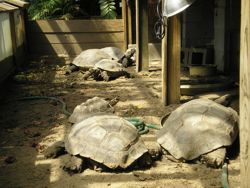 We came, we saw, we sawed. We worked. In quintessential Tortoise Reserve style we moved several projects ahead and finished none:

That almost completed work accounting for the bulk of Sunday, Monday and Tuesday we coerced Dave to don his Easter shuttlebunny ears and scouted a new section of local riverway Tuesday evening. Weve done the Black from above the headwaters of Great Coharie and Sixes Run creeks, and all thats needed to finish the full length is the tidal portions from Hunts Bluff to the confluence with the Cape Fear. That was our plan.

But an afternoon shuttle scout showed the South to be up and running well, and a look at the heavily margin-notated Ferguson guide (Paddling Eastern North Carolina) revealed that Section 10 from Ennis Bridge to Beattys bridge still remained to us unrun and unannotated.

Another fine section of the bottom South and into the Black, clear of strainers and relatively undeveloped. And unposted; other than the Cape Fear Lumber Company holding along beginning miles of the South most of the inviting sandbars and backwoods landings lacked those signs signs everywhere a sign blocking out the scenery breaking my mind do this, don't do that, can't you read the signs.

But once again my family knows not the way of the muckle, and despite many an inviting eddy or sandbank paused but a scant two times. Perhaps a good thing, as the more open Black was a longish afternoon of wind in our face (an unrealized harbinger of things to come) and we arrived back at our Tortoise Reserve base in time for a hearty dinner of expired produce and a full van load disgorging of gear in preparation for a few days of paddle-in camping at Hammocks Beach State Park 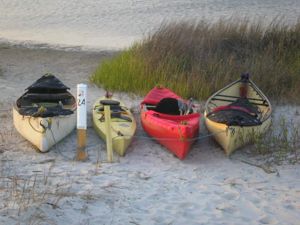 Quite simply another coastal NC gem. We paddled out into a 20 knot headwind, lining and lugging the loaded boats through the last half mile low tide shallowing channel to the lagoon behind the beachfront sites. And we reversed the process on the way back, although this time into weather radio forecast gale force winds.

Oh, and it blew like stink the entire time we were there.

The Ranger staff was kindly enough to suggest the best of the proximal paddle-in sites, #7; without question the best of the sites near the paddle-in trail, with wind protection, shady hideaways and the shortest gear walk from the lagoon landing. Another kudos to NC State Park Rangers, yalls the best.

We took them on their word for site #7, and took # 8 as well for the boys tents (each preferring their own evening abode), there being no trees stout enough to sling Coopers Hennessy hammock.

Rating the near lagoon sites 7 is tops, 6 and 8 are the nearest competitors in terms of wind protection, 9 less so, 10 and 5 are fully open to the Atlantic and so best suited for an off-shore breeze. Beyond those beachfront sites it becomes a hike to sites 1-4, and those sites come too near the daytripper and backpacker ferry landing and bathhouse (potable water, flush toilets and hot showers too syphilized for me, I couldnt bring myself to visit, but Diane and the boys hiked down almost every day).

Sites 13 and 14 are along the paddle-in route to the lagoon and offer the most wind protection, backed by towering dunes, but its a long hike/wade to the beachfront. Three group sites designated A, B and C are also available to organized clans to the south of the bathhouse/dayuse area a half mile carry from the nearest access at the ferry landing

Sites 11 and 12 remain a mystery; we looked but didnt find. I wonder if they washed away from the north of site 10 as the island naturally marches southward. Had the wind been less (perhaps a rarity on the NC coast) Hammocks would be a fine venue to base camp and explore on day paddles, the backside of the Park sites along Bear Island, or along a marked (yellow) canoe trail through the eroded innards of the Huggins Island maritime Swamp Forest.

Typical of barrier islands even the history is intriguing from native American seasonal habitation to pirates to the civil war, with latter ownership including a New York neurosurgeons private hunting preserve, then deeded to an association of African American teachers (whose attempts at development were thankfully unsuccessful), then donated to the State as a minority segregated park and finally open to us white folk after the Civil Rights Act of 1964. Praise god and pass the portage pack.

Hammocks Beach is pristine, unlittered even by the usual Atlantic flotsam and jetsam or by camper refuse. The No alcohol and No fires regulations undoubtedly help and the ever present winds may help as well; walking in the bizarrely sculpted dunescape we could turn and watch our footsteps in the sand being wind erased before our eyes.

Well be back; either as a Barrier Island Trifecta Assateague MD, Cape Fear VA, Hammocks Beach NC or as a Gems of North Carolina Tour Merchants, Hammocks, Lumber.

None on the South or Black.

The Black and South Rivver run for 160 miles through coastal NC and include dozens of access points.

Guidebook "Paddling Eastern North Carolina" for the South and Black.