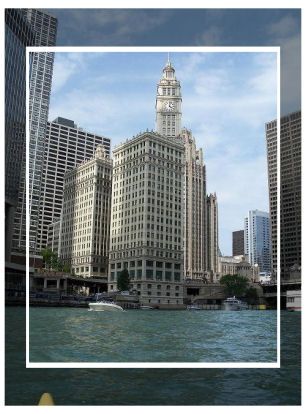 On a beautiful August day we rented a couple kayaks from Kayak Chicago and set out to explore the Chicago River. We put in at the Kayak Chicago dock at North Avenue and the river (a pleasant 1-mile walk from the nearest el stop, if you don't have a car).

We first paddled four or five miles north to West River Park at Argyle Street, turned around, and then paddled south to the Loop. The paddle north, unfortunately, was a little disappointing. It's industrial for the first mile or so, then turns residential, then park-like. I've read some of the write-ups by people who have really liked this paddle and it's not that there's anything in their reviews that I can say is wrong, it's just that it didn't seem all that interesting to me. What did appeal to me was that, having lived in Chicago for 15 years, I had a couple chances to see a particular house or building that is invisible from the street and say "Oh, that's what's back here." If you are from out of town, then I doubt that would have much allure for you. On the plus side, there are a lot of birds out there: herons, ducks, kingfishers, and others I didn't recognize.

The paddle south was completely different. It's about a mile south of the put-in before the river starts running through the business district. The buildings create a canyon along the river and it is great paddling.

The buildings get larger and more spectacular as you approach the Loop. Then you get to Lake Street, the el runs overhead, there are bridges every couple hundred feet, and the infusion of water from Lake Michigan turns the water from gray to an emerald green. It's a spectacular way to see downtown and I highly recommend it. Make sure you comb your hair before you go; the sightseers on the bridges will be taking your picture.

Be forewarned; there are a lot of big boats that cruise though the Loop. They're not particularly obnoxious, so if you're used to that kind of thing you'll be fine, and maybe even enjoy playing in the wakes. But if you don't like power boats nearby when you're in a kayak, then paddling through the Loop will be your ninth circle of Hell. I don't think there are any places to land while in the Loop (and there are relatively few on the trip north too), but I am not 100% sure about that. It doesn't much matter though; with a leisurely two- or three-hour paddle, you'll get to tour the Loop and make it back to the take-out at North Avenue.

The corner of North Avenue (1600 N) and just west of the river (~1500 W). There should be plenty of street parking. You can also get off at the North/Clybourn stop on the CTA Red Line and walk a mile.

Any Chicago street map will do.