by  safety6
A self-supported trip created by safety6 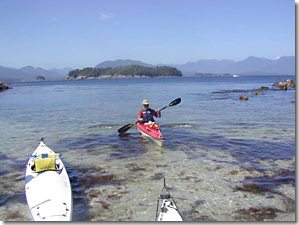 Getting there: The easiest way to access the Broken Group is by taken the BC Ferry from Tsawwassen to Nanaimo. The ferry takes approximately 2 hours. After the ferry, follow the signs to highway 19, highway 4a to 4, Port Alberni. It is a 1:30 minute drive to Port Alberni. There are several large grocery stores in Port Alberni and you can pick up fresh vegetables there. Additional there is a Liquor Store where beer can be acquired. We had a very nice dinner at the Crab Box in Alberni, since a part of the group would be camping this really worked out well. It is approximately 85 km (52 SM) to the turn for Toquart Bay. There are some large billboards, but you need to keep your eyes open. The road in to Toquart is 16 km of gravel and dirt. There is commercial campground at the Bay's edge and it costs $8 Cdn to camp. Part of our group camped here in preparation for paddling out to the Broken Group in the morning. there is vehicle parking and starting August 1st it will cost $3 Cdn to park. There is a caretaker on site and the area appears to be a secure place to keep your car. If you are not camping the kayak launch and landing area is just west of the campground. Peggy and I spend the night in Ucluelet at the Thornton Motel, approximately $100 Cdn with your AAA discount.

Chart: No 3670, The area is all part of the Canadian National parks system. Cost to camp is $8 Cdn collected by contract employee who make the rounds by boat. You can pay with a credit card. All of the islands are normally accessible.

Weather: June - September the area has relatively mild weather. It is normal to have foggy mornings and windy afternoons. Plan for winds from the west in the afternoon. The western most islands are exposed to the winds. the inner islands Turret east are protected and the winds are not as much of a factor, 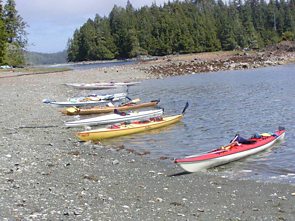 The paddle: The morning of the 22nd the group rejoined and packed up for the journey to the islands. It took a while to get the tents packed up and all the gear loaded into the kayaks. Please note that there is no water at Toquart or in the Broken Group. We took 3+ gallons per person with us. This ended up being too much but you are better off with extra than not enough. It was foggy in the morning and quite damp, we learned that this would be our standard morning. The fog usually burns off by 10-11 AM. We launched by approximately 10:15 and headed out. Our plan was to paddle between the Stopper Islands, past Lyall Point to Hand Island. Hand is one of 7 Islands with campgrounds, we stayed long enough to stretch our legs, enjoy the sun and headed on through the Braband Islands to Dodd Island. Dodd was our planned lunch stop. The sun was out and it was very pleasant there. The campground is on the east side of the island. after a pleasant lunch and some exploring we departed for our final destination, Clarke Island. Our route to Clarke took us past Turtle and Willis (another Island w/campground), Turret Island, we passed between Lovett and Trickett Island. When we cleared the lee of Trickett we realized that an afternoon wind of approximately 15 kts had come up. We ended up with a crossing to Clarke of about .75 NM into a strong wind. We were to discover that in the outer islands the afternoon winds were a daily occurrence and need to watched out for and respected. We found a place to camp on the beach at Clarke Island, Clarke and Benson are the western most islands are therefore exposed to wind and waves flowing in from the Pacific. The campgrounds do have composting toilets and are pretty decent. We decided that we would spend 2 nights on Clarke and use it as a base for exploring Wouwer, Dicebox, and the other outer islands. We spend an evening socializing with the other kayakers on the island enjoying a neighbors camp fire (permitted below the high tide line).

The following morning we woke to the fog and after a breakfast headed for Wouwer Island where a large colony of sea lions live. We paddled west around Clarke turning between Clarke and Benson and then direct to Wouwer. We soon encountered 10 ft swells in the open water and it was an exciting up and down write. Approaching Batley and Wouwer Islands it appeared that there was a surf line between the two and we decided to turn early and go north of Batley. We ended up getting an exciting ride in on the swells. Amazingly as soon as we rounded the east end of Batley the water turned calm and looked like a lake. We proceeded around the east end of Batley and headed between Wouwer and Batley back to where we had smelled and heard sea lions. Once we neared the west end of the islands you could see the 2-3 ft high surf coming in. the rest of the group stayed about mid channel and I explored to to the end of Wouwer to where I could see the sea lions.. This area needs to be traveled with caution. You can great large swells coming of the Pacific here, also the sea lion can be a hazard as they are large (1500-2000+ pounds). When the main group was waiting a sea lion jumped right in front of Peggy and luckily took off in the other direction. We had a quick rest stop on Wouwer, landing is permitted on all of the islands, only camping is limited to the 7 areas. From there we proceeded to Dicebox for lunch. While eating we noticed the wind rising but didn't pay much attention.... 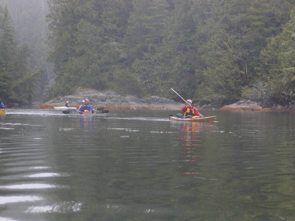 From Dicebox we proceeded Bauke and Effingham Islands going through the channel between Gilbert and Effingham which gave us a chance to se the campground at Gilbert. From there we skirted back to the west to Camblain Island. It was here that we realized that we now had a strong 20 kt wind out of the west and 12 - 18" waves. The crossing to Clarke is approximately 1NM and it was a hard crossing with the wind pushing hard on your body and blades. The only reason this crossing was possible is that it was a head wind, had it been a crosswind the crossing could not have been made. Hindsight being perfect we should have waited till dusk at Camblain. Had one of us gotten in trouble it would have been very difficult for the other to turn around and offer assistance. It became a rule that we not paddle later than 2 PM after that!!!

The following day we broke camp and headed back east to Hand Island. We took a circuitous route so that we could see as many of the islands as possible. There are many Bald Eagles in the islands and we encountered at least one or two on every island. In addition to the eagles and sea lions there are deer, wolf, cougar, mink, and seals in the area. During our visit one of the Islands, Gibraltar, was closed due to wolf activity. We paddled west past Turret, Turtle, into the Tiny Group, to Jacques Island (lunch stop) and then into a beautiful lagoon that separates Jacques and Jarvis Islands. You can paddle between the islands only at high tide! The lagoon is very pretty and is worth exploring. From there it was on to Hand Island for our next camp. Hand was crowed but we did manage to find room.

On our final day, we paddled south to Sechart and the Pinkerton Islands. Sechart is where a water taxi drops kayakers coming out of Port Alberni. The Pinkerton Islands are out side the Broken Group Park and most of the islands are Indian Reservation. The islands are very scenic, but should not be landed on. Once again we had a foggy morning. Paddling in the Pinkerton's in very similar to paddling in a quiet river. The water is still and clear. All of us greatly enjoyed this serene paddle.

We spend approximately 2 hours exploring the different channels through the islands. We hoped to fin a beach for lunch between the Pinkerton's and Lyall Point but had no luck. We proceeded on to Stopper Islands and landed on the western island in a quiet, protected cove. Here we met up with Don's girlfriend Jara, headed out to the Islands with a group of students. After a short stay we proceeded back in to Toquart Bay and home or for 4 of us Victoria. Peggy and I did paddle the Victoria Harbor on Sunday having a very pleasant paddle in the main harbor and up the gorge waterway.

No permits required. Camping is $8Cdn per night. There is $3 Cdn per night charge for your vehicles at Toquart.

The easiest way to access the area is to take the ferry from Tsawassen to Duke Point (Namaimo) from there take Highway 19 to highway 4 to Port Alberni, proceed 85 km west and look for the Toquart Bay turn off, note this is a dirt road. It is 16 km from the turnoff to the bay. As an alternative there are two boats that will ferry you and your kayaks from Port Alberni to Sechalt. This trip takes approximately 3 hours and must be coordinated ahead of time.