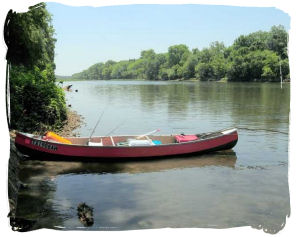 From Whitney to Dicks Canoe at FM 2114

We arrived at Lake Whitney Dam outside of Whitney and stayed at one of the pay campsites that are run by the Corps of Engineers overnight before heading down the river below the dam the next morning. We enjoyed staying at the park because it provided water hookups, toilets, showers and electrical hookups that we used for our little air conditioner unit that we had blowing into our tent. The weather in Texas has been EXTREMELY hot this time of the year and this day was no different.

PUT IN
We had made arrangements with Dicks Canoe ( www.dickscanoe.com/rentals.html ) to leave our truck there and they would take us and our canoe to the dam site and drop off us. Parked at Dicks place (the parking is off the road and chances are low that the vehicles will get broken into). We loaded our canoe onto his canoe carrier and waited for a few minutes while another group showed up for their own trip. You can rent canoes or kayaks for the trip down the river from the dam to the take out at Dicks Canoe. The trip is approximately 8.5 miles. We had asked the owner of Dicks whether it was advisable to rent a separate kayak to take down the river as well as the canoe that we had brought and he gave us some good advice. Not advisable because of the normally slow current and because the winds are blowing against you the whole trip down the river. It was good advice we found out as we went down the river. You can reach Dicks place by going past Laguna Park on Highway 22 and then turning onto FM RD 56, drive about a mile to Ranch Rd 2114 and turn left, drive until you see the sign on the left right before you go across the bridge at 2114.

We were dropped off and put in at the foot of the dam, the water there is very shallow, around 1 foot deep and goes around 50 feet before it gets deep enough to canoe in. The water was cold (or maybe the day was too hot) but it certainly felt good. There was no one else on the river except the ones that had rented some kayaks and came from Dicks. Later on in the day we were passed by a large group of about 12 people who had brought a small green bass boat and a trolling motor. They were all tied together like a pack train and were towed by the boat with the motor as they made their way downstream.

The first few miles were slow going, the current was very slow and the water was very low, only about 2 to 5 feet with a few holes a little deeper along the way. The wind blew against us the whole way and even with my wife and I paddling together it was still a good workout. We were loaded for an overnight trip because we had been planning to stay the night along the river but we did not see any places that looked very welcoming along the way. 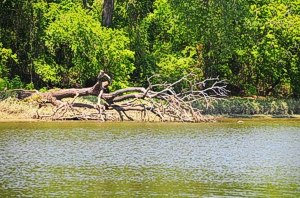 The fishing was very slow in the beginning and did not improve until about halfway down the stretch that we were on, we were using live and dead tilapia as well as worms on bobbers and could not get any bites. I attribute the slow bite to the extreme heat, most of the fish were probably somewhere cool that we could not see. Along the way we did manage to catch a 1 pound catfish at first, after we went down about 3 miles we came across a tree that was laying in the middle of the river and we caught a 3 pound bass and a 10 pound catfish while using dead bait at the roots of the tree.

Around 1 in the afternoon we noticed that the river was rising and we had been warned that they had been releasing water from Whitney Dam into the river between 1 and 3 in the afternoon almost every day. We decided to take advantage of the new found current and the higher water to float down the river without paddling. The river rose about 3 feet provided a good run, the water was now too high for fishing and there was no way to slow down while in the water. We could have put in to the sides of the river and fished from there but since the water level was now very high compared to what it had been earlier we did not think that we would catch any more fish until the high water receded and went back to normal levels.

The current was so fast and strong that we made better headway than we expected and ended up at the take out at Dicks place before the end of the day. Since we had not stayed on the river that night we decided to go back to the campsite on Lake Whitney Dam and stay there again for another night. It would have been too long of a day for us to drive back to San Antonio that night. We set up our tent, showered off the sweat and then went to a little Mexican cafthat is in Whitney. Make a left at the light if you are coming from the dam side and it is right there at the left, the food was excellent and the prices were good.

We will have to go back and see what the whole length of this trip is like without the extra water flow to see what the river is really like and look for camping on the side. If you do stay there be careful and do not get washed away when they open the gates upstream.

Fees charged by the Corps of Engineers for campsite use, 16 dollars a night, I think. Still cheaper than a hotel or motel.