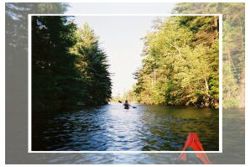 My wife and I arrived on Monday morning about 9:00am. There were several parking spots still open in the small parking area. We loaded our gear into our kayaks and proceeded to Low's Lower Dam, the launch area, which is only about 25 yards from the parking area. Guests using this area should register at the gate before entering the water so as to facilitate a rescue or emergency notification if necessary.

After putting in, you paddle upstream along a narrow quiet channel surrounded by fairly steep banks and beautiful scenery. This channel opens to a marshy area and the river swings to the right. It is very easy to follow. After a short paddle the river again swings, this time to the left and up ahead on the right you can get a glimpse of the old railroad bridge. The river passes under this bridge and swings again to the left.

Just follow the river and at the next swing this time to the right you will be at the entrance to Hitchen's Pond. It's beautiful. There are 5 DEC campsites, numbered 4 through 8 on the pond which is about 2 miles long from one end to the other. The river drops you off not quite at the midpoint. We decided to camp at Site 5 which is almost directly across from where the river drains the pond. This site is sheltered from the southwest wind, is fairly large, has a stone fire ring, and a wide board nailed to a tall stump that acts as a table. 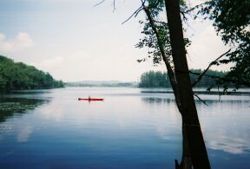 While here, we camped in our Hennessy Hammocks, which performed wonderfully. The site was a bit "buggy" and I attribute this to the time of year we chose to for our trip. Deep Woods Off kept most of the "skeeters" at bay, but on land the deer flies at times were relentless.

There were several pairs of loons nearby and one single that stayed close to our camp for the duration of our stay. We were particularly fond of a Bald Eagle who fished in front of our site many times. My wife Tamie was even able to glide her kayak under the tree he sat in while he was eating one of the fish he caught, and watch him from thirty feet away without disturbing him.

We were privileged to also observe a beaver and an osprey, and while we didn't fish we should have, as many times the fish were feeding just off shore almost in a frenzy of activity. It can get windy on the pond as we found out on the paddle back out. Several times the gusts almost took the paddles from our hands.

I would highly recommend this trip to anyone just starting out as it is an easy paddle and the area is just beautiful. For those a bit more adventurous, the Bog River continues down another 8 or 9 miles to Low's Lake and the are many more campsites there and along the way.

While we were camped, the only other folks we saw were fellow kayakers and canoeists heading further up river on the other end of the pond. A paddle around the pond Tuesday morning told us that we were the ONLY ones camped on the entire pond. Where can you go today and have that kind of privacy? The only non-natural noise you will hear in this area is an occasional airplane.

All the campsites are primitive. Some have some homemade creature comforts as the "stump table" I described at site 5. There is a register book at the gate leading from the parking area to the put in. Be sure to sign in and out.

We used Necky touring kayaks on this trip, An Elaho HV for myself and an Elaho for my wife both are just over 17' long and can carry an amazing amout of gear. We slept in Hennessy Hammocks for the first time...it doesn't get much better than that. We used several brands of freeze dried foods, all of which went beyond expectations.

There are no fees or permits for groups under 10. No motors allowed.

Take Route 30 North out of Long Lake NY heading towards Tupper Lake. About 7 miles south of Tupper take a Route 421 west. Watch for the "Lower Dam" sign and turn left onto the dirt road, the parking area is at the end and the launch is just beyond that.
The parking lot fills up early so keep that in mind and be prepared to park on the road into the area and portage in.

We used the "Adirondack Paddler's Map" and the guidebook "Adirondak Canoe Waters North Flow" which gives a great desciption of the area and its' history. There is alot of information in it about A. Augustus Low who created Low's Lake, the Bog River, and Hitchens Pond with the dams he built way back when.