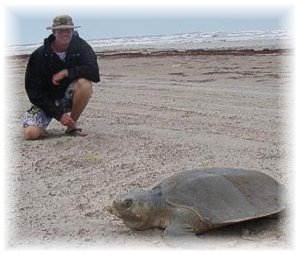 It started pretty early on Friday, 3:30am for some, 6:30am if you lived in Victoria, TX, but the long drive down south was easy (for me anyway - I was sleeping, Tom was driving).

The 6 snook hunters (Ken, Eli, Gary, Robby, Tom and Adrian) arrived in Brownsville Friday around noon time. The Boca Chica highway was 23 miles of mostly "nada" with a little "not much" thrown in every few miles. It was sunny with a few clouds and because Mother Nature knew we were coming winds were 20-25 mph. Four wheel drive was really something we needed - less than 1 mile in we had to break out the tow straps.

We downloaded our gear and stayed right on the beach within 50 yards of a group of shacks (with windmill and solar energy) our local tour guide, Don (owner of shack #9) kept an eye the campsite while we immediately set out to test our mettle against the winds of Boca Chica. Then less than another mile later we broke out the tow straps again. That was the last time we needed them all weekend.

We launched into the wind on the South Bay cutting across the bay heading for a protected shore. It was a tough paddle! Why did I follow those guys? They didnt know where they were going either! Robby hooked up on a nice red a quarter inch short of legal and then an undersized snook as well. Eli released a nice trout but the nice red released itself before getting to the boat. Tom missed a few and I had casting practice. Gary and Ken went to another area and caught a few sand trout and skip jacks. We came back after Friday afternoon fishing had a few attitude adjustment beverages and a steak dinner and settled down for the night.

Saturday morning we took a different route to the water soft sand is no match for a skilled driver in a 2 wheel drive way to go Robby! We fished the same area that we did on Friday but saved a 3 mile paddle. Uuhh Ohh. Here come the squalls! The sky turned grey, the winds picked up and the water got rough, it sprinkled, it showered, then it poured. From the four corners of the bay we raced back to the launch spot and waited it out.

We went back out and got hit again 2 hours later not many good fish caught that day (Robby had a small red and Eli had a small snook and red, Ken and Gary caught more skipjacks). Tom, Robby, Ken and I returned back to camp and were greeted with soaking wet tents. Kens Tent Cot had been blown down the beach about 30 yards as a result of the heavy squall winds. Then Eli left and missed all fun. Because right after he left we got Discovery Channel and Animal Planet live right at our camp site.

At about 3 in the afternoon, a Ridley Sea Turtle (Endangered Species) comes right out of the surf and crawls into our camp, digs a hole, lays 78 eggs, then returns to the sea. AMAZING!!

We called some of the locals who called Turtles, Inc. and got the US Fish and Wildlife Service to come down and recover the eggs to take them to an incubator for a safe hatch. It was the biggest thrill we had all day.

In between rain squalls we fished the south jetty Vermillion Snapper were landed along with one puffer fish. Saturday night it didnt rain on us what a relief!

Sunday morning Gary and Ken took off while Tom and Adrian hit it one last time Tom was determined to get the one that got away on Saturday. We were in weeds (literally) back in the mangroves casting she dog and wood peckers topwaters into the shallows between the bushes. I was in an adjacent clearing when I hear a big ruckus going on - it sounded like a wrestling match in a kayak. It was actually Tom wrestling a 32" snook out of the mangroves and then into his boat. He called me over in an excited voice and told his story of the wrestling match. I promised him he could tell that story it is quite amusing and amazing.

As usual, this PACK trip wasnt really about catching fish but something better we shared camaraderie, we shared some serious whiskey, we shared our love of the outdoors and wildlife and were witness to a once in a lifetime event. Thats why I joined PACK and I hope you do too.

Although Boca Chica has little in the way of modern amenities, it does offer a variety of outdoor recreational activities, including fishing, swimming, surfing, snorkeling, kiteboarding and birdwatching.

From Brownsville, take Highway 4 east until it runs out. Once you hit the beach, you can either go right to the mouth of the Rio Grande or hang a left and cruise up to the north end, which is directly across from South Padre Island.