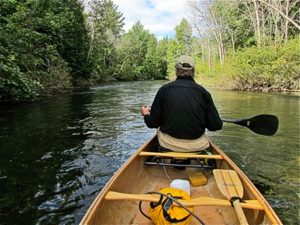 Near the top of Michigan's lower peninsula there is a fan-like array of navigable rivers, well known to paddlers, offering a variety of paddling challenges. The Boardman River runs westward from Kalkaska to Traverse City where it empties into Grand Traverse Bay on Lake Michigan.

On Thursday, September 9, we drove from Dons summer home in East Lansing to Kalkaska. Don drove his van carrying his 17 Wenonah kevlar canoe and I drove my car. We needed two vehicles: mine for parking at the takeout and his to deliver the canoe to the put-in. When we finished each trip, we would put all the canoe gear in my car and lock the canoe to a tree. We would drive back to Dons van and then drive both vehicles back and load up the canoe. From there we would drive to the campsite.

We searched for and found Schecks State Campgrounds east of Kalkaska on Brown Bridge Road. What we didnt know is that there are two Schecks campgrounds: one is an equestrian park and the second, nearby, is the regular park. At any rate we picked a campsite, paid the $6 per-person fee and set up camp in the equestrian park.

Since it was early afternoon we set off for the Boardman River to do the first half of our paddle. We drove west to Brown Bridge Dam, the takeout for our paddle, and parked my car. We then drove back past our campsite to the put-in about 12 river-miles to the east.

The entire area was a forest wonderland, heavily wooded with cedar and assorted pines, spruces and aspen. We also noticed a lot of kayak activity along the river at various access points. After we began our paddle it became apparent why the river was so popular.

The river, close to populous Traverse City, is 20-30 feet wide, with crystal clear water, a depth of 2-3 feet, a gravel base, tight bends and twists, and a few rapids. The paddle, under the forest canopy, was pure pleasure until we reached the large pond above Brown Bridge Dam. The river opened wide, bordered by reed beds, and we noticed signs advising boaters to stay within buoys marking a channel into the pond. After paddling between the two sets of buoys we headed for the center of the pond and paddled in the direction of the Dam house visible about 1/2 mile to the east. It wasnt long before the water was so shallow the canoe became stuck. Don got out and we looked for deeper water. We saw none and Don dragged the canoe backward until we were on the very edge of the reed beds, the only place with a decent current and deep enough to float the canoe.

We then paddled in the narrow channel, barely as wide as the canoe, along the edge of the reed bed and around the pond until we finally reached deeper water. A couple sitting at a picnic table near the edge of the pond found our frustrating struggle amusing. Paddling into a stiff breeze, we finally reached the takeout. There we saw a sign warning that the water level in the pond had been drastically reduced because of some unspecified danger. The information would have been useful to us had it been posted upriver. This was the first of the challenges we would face in the following days.

That night the camp was pleasantly quiet. Don prepared some tasty mac n cheese. Only days after a new moon and away from urban light pollution, we had a spectacular view of the milky way.

On Friday morning, after shuttling the vehicles, we paddled the second 12 mile leg of the Boardman. We put in below Brown Bridge Dam and paddled to Cass Road Dam near the Traverse City limits. Below that Dam the river runs for another four miles, winding through backyards of the city, before emptying into the bay. We opted to skip this segment because we were going to change campsites to the vicinity of the Sturgeon and Pigeon Rivers.

Again, the paddle was scenic, through a series of bends and twists, with some nice Class II rapids, until we reached Keystone pond above Cass Road Dam. The pond was long and, because of low water, looked like a large abandoned gravel pit. Consistent with our past experiences on open ponds, we had to paddle hard into a stiff headwind. At the takeout we also had to struggle getting our gear and canoe up to the parking lot because the pond was low and the embankment, made up of collapsing sand and gravel, was steep.

Overall, we would rate the Boardman as one of the most enjoyable paddles of the six rivers that we tackled. Looking back I realize that we should have talked to the local kayakers about river conditions and hazards. Although we were able to overcome the hazard of the low water above Brown Bridge Dam, it could have been worse if we had gotten stuck far out in the reed beds and had to slog and bushwhack our way out.