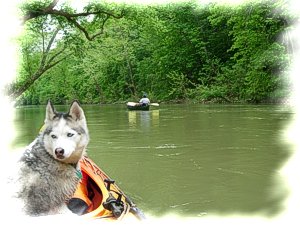 I hesitated to indicate this as a whitewater river. But considering the mass of rain the previous week the river ran 4' above normal. Quite exciting for class 1 Indiana boys. This was a very wet and extended spring this year. Water very cold on this spring fed river/stream. Temps at 70 as a high on day one and probably highs in the low/mid 60's the rest of trip.

The Blue consists of bends, rapids, chutes, limestone bluffs, half canyons, islands, springs, caves, hollows, and bottoms. The first Indiana Stream to be protected by the Natural Scenic and Recreational Rivers Act of 1973 (Ref. "Paddle Indiana" by Alan McPherson).

With the water flowing faster than Rick or I have experienced before we were very excited. Not a whole lot of paddling to do, mostly just steering. Pulled over to camp just a couple hours after starting due to our late start, no hurry attitude, and wonderfully inviting island. We haven't seen anyone so far Fished a little, let the dogs run around, did camp stuff. Very comfortable island.

Took off on day 2 at 11 am or so. Within an hour started seeing the gorgeous limestone bluffs, passed Dick's campground not much later. Within two hours investigated an awesome cave on the left with VERY freakin' COLD water feeding The Blue.(-30 min.) Passed by more bluffs and a few bridges. With rain in the forecast we decided to make sure we were in a good accessible spot. So we stopped at Cave County Canoes campground in Milltown at about 5 pm. We had the whole place to ourselves. Easy spot to resupply as town is just the other side of tree line. Quiet town too. Maybe because it rained all night.

Back on The Blue again finally around 1pm to 1:30 pm. We waited out the rain a little and tried to get everything as dry as possible. Plus a big damn Dam that MUST be portaged!

River is really running fast now. Rapids are coming in to play. More limestone and a big cave on left which we miss due to the very fast water. Got a couple pix though.

We had a great time on these fast moving rapids. They just kept coming. Me riding low in the kayak w/o a skirt, Rick handling a decent size canoe solo. I took on water and bailed with a sponge between each series of rapids not knowing if another series of rapids was coming or not. Thank goodness I took the time and effort! 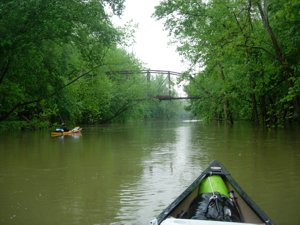 We passed under an old iron R.R. bridge about 3 pm and found Rothrock Mill Dam just after. We pulled aside to see the old foundation (because that's all that's there) and reminisce about our recent river experience. As well as discuss if we were at the dam we were supposed to portage or not. As said, the water was so high we weren't sure. Do we shoot it?(-30 min.)

Hell yea! We were so close to it already though we hardly had time to position. I barely got pointed downstream before bottoming out coming off dam. More water to bail, but stayed upright.

Found another nice spot on an island and was halfway set up by 4:45pm. Plenty of nice dead driftwood on these islands makes for fantastic campfires! We called Dick to check in. So he could monitor our progress and have a better idea of when to pick us up at the Blue/Ohio River confluence near Leavenworth, IN. He warned us the river would rise about a foot from the all night rain last evening and to make sure we had our gear far enough off the river. We pulled the boats up but had already set up camp. We estimated the rise and stuck with our spot Got some cold beers in me now and a fire roasted hot dog sounds good. I need a good stick, grab my hatchet and WHACK!!! Darn near cut the top of my index finger knuckle off. It's deep and bleeding good/badly. It's about 8 pm black as night and no way are we going to risk the river for my finger. A good first aid kit is crucial! It's fine now.

About 10:15 am we pushed off again when it immediately started raining. And continued to do so all day. The Blue is starting to slow down from the backup of The Ohio.

At 2pm we came across a no longer used iron vehicle bridge with river debris on bridge platform. I estimate the height to be 18 to 20 feet above current water level. According to Dick, it was the most water he had seen in over/about 20 years. And it was like that about a month before our trip. Very hard to imagine.

We hit the Ohio about 4pm. Gave Dick a call and he picked us up a short time later. Threw a line in as we were waiting. BAM! First cast. BAM! Second cast. Got a hit on the third but missed it. So no, we didn't get skunked. Note: When you're coming off the Blue to the Ohio, Go out on the Ohio and follow westward. There is a boat ramp there on the right. Don't stop short and end up climbing the muddy hill like we did.

For Blue River info or White River E. fork (we did 100 miles on it), feel free to contact me (click on my "Submitted by" link at the top). I'd be happy to share. Please do not contact me for any other reasons period.

I used Necky Manitou II with my dog shotgun. Very happy with it. A little too much gear for it though. Lose the dog and it would be fine. Rick was in luxury with his Olde Towne Discovery 158 and his dog. He had all kinds of space

Google it. Call Dick at Old Mill 812-472-3140. Buy a map. It's Fredricksburg, IN off US 150. Buy or check your local library for "Paddle Indiana" by Alan McPherson, access guide to canoeing and kayaking all of Indiana's Lakes and Streams.