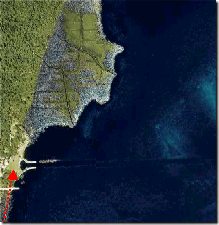 We've all heard of John Deere -you know, those big green John Deere farm tractors, and little green lawn mower tractors, right? Well, the company founders - the Deerings - visited Miami in the early 1900s, liked what they saw, and decided to buy some property and build a couple of "palaces" here. Except one needs to add another "a" to describe what resulted, actually: "palaces", literally, is more like it. One was built in Italy. On a visit overseas, it was so well appreciated, it was bought lock stock and barrel, disassembled brick by brick, shipped to Miami, and rebuilt south of the city center on what is now the North Grove waterfront. Villa Vizcaya is now an Italianate mansion museum operated and preserved by Miami-Dade County (website: www.vizcayamuseumandgardens.com/).

Now, farther south in literally the then-untamed wilds of the early 20th century, some 15 or so miles southwest of Miami, and 12 miles beyond Villa Vizcaya, another Deering mansion was built! Originally sited within the distant mangrove-lined and forested woods fronting south Biscayne Bay, the Deering Estate is a three-story native coral rock stone structure and associated outbuildings, badly damaged during Hurricane Andrew in 1992, during which water flooded the bottom 18 feet of the historic house and grounds. Now, years later, the buildings and grounds have been reconstructed and restored, and it is now a state historic site.

While there are plans for a canoe (and kayak, I certainly hope!) launch site to be constructed adjacent to the yacht turning basin, reached from the newly constructed Visitors Center building on SW 168th Street, funding has not yet been assigned for it and it's not expected to be built until around 2003.

The Launch Site & Getting There
The Deering Estate is located in South Miami-Dade County, about 17 miles SW of Miami. Take US 1/South Dixie to SW 168th Street -Richmond Drive - and drive east. That's almost it! Or follow Old Cutler Road -a far, far more scenic drive! -to the canal. From US 1 you'll travel east to Old Cutler. Take a from Richmond onto Old Cutler right and drive south to just north of a canal about 200 yards away. It's hard to miss, as there's a bridge over the waterway, and it usually draws a crowd of kids who've bicycled there to dive into the canal some 12-15 feet below. Heck, I did it as a kid, myself -let's just say a few years ago Drive into the fenced parking lot on the Bay side of Old Cutler.

The Deering Estate property extends south to the canal which empties into Biscayne Bay. At this parking lot site, there is a sloping shoreline appropriate for launching paddlecraft there, and many do. A caveat, however - while much of the shore is lined with mats of dead eel and turtle grasses, the "beach" itself is stony coral rock: fiberglass, and exotics/composites beware of scratches!

The Paddle to Chicken Key 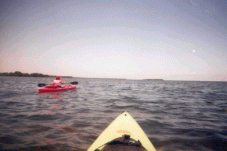 So Sally and I pulled our OK Scuppers off the Jeep's roof rack, prepped up, and carried our boats to the launch site on a gorgeous early Sunday afternoon, bound for Chicken Key, a small island about one and a half miles northeast of our put-in. We spoke with another couple who'd just pulled in from the same trip we were about to begin. They told us there was a nice sunning beach that was dry at low tide at Chicken Key, and that it's a really nice trip to take. As they took their boats out, we launched ours.

We paddled NW against a moderate but constant 5 mph breeze, and against a mild tide. The water was delightful, not too warm, about 77 degrees or so, the air was near perfect, about 85, and the bright blue sky was peppered with small puffy white cumulus clouds slowly marching to the west high above us. Biscayne Bay even this close to civilization and this close to shore was surprisingly but thankfully crystal clear, and despite a light chop, still allowed views of the bottom, running 3-5' below us. Turtle grass and eel grass sheltered a number of well-camouflaged fish and invertebrates, only infrequently observed. Gulls, terns, and a distant pelican wheeled through the sky, occasionally plunging into the sea from above to snatch a bit of food, and anhingas and cormorants alternately ducked beneath the surface and dived for fish or roosted, wings out, to dry their non-water repellant wings in the sun.

We could see a couple of kayaks being paddled against the mangrove shoreline, perhaps a half or three-quarters mile away. In the distance to the east northeast, we could see Key Biscayne and the condos that now line the island's eastern Atlantic-facing shore. West northeast, a few miles farther away, we could see the towers of Downtown Miami in the hazy distance some 12 miles northeast of us. Much closer to us, the sun-bleached blue superstructures of Florida Power and Light's Cutler Power Plant seemingly loomed over us about a mile to the west, while closer, the outer edges of the Deering Bay shoreline development peeked around the mangroves, while above them, the new midrise Mediterranean-style condos of Deering Bay were being augmented by others still under construction.

We approached the lee side of the Key in the wind shadow and, seemingly, in the shadow of the tide as well. The water calmed, ease of bottom viewing increased. We saw small pale fish swimming across a now sandy bottom as we neared the SW corner of Chicken Key, about a hundred yards away. There was a flash through the water right after I'd sloppily thunked my gunwale with my paddle -a "silver ghost" of the flats, famous in the 'skinny water' of Florida and the Bahamas - a bonefish - streaked away. The water depth decreased to 3 feet, two feet, one foot. But it was near high tide, and there was no dry land, or at least a beach, for us to walk, so we continued, turning to port, to the north, to circle the Key in a clockwise fashion.

The water depth increased, even close to the shoreline within the overhanging reach of the mangroves, and here in a small bight, the still, almost hot water was filled with an expanse of tendrils of a thin dull grey cotton candy-like substance apparently attached to the bottom. A couple of power boats and a large motor yacht proceeded out of the Deering Bay anchorage through the channel between Chicken Key and the mainland, about a half mile distant. We paddled across this almost dead zone, seeing no fish, hearing only the splash of our paddles and the occasional muted roar of a jet out of MIA bound for the Caribbean high overhead.

We neared the NE point of the island, and the wind and chop returned. The shore here was more open and far less overgrown with mangroves, and there was beach of sorts, albeit one of hardscrabble coral rock. An official "No Trespassing" sign greeted us as we turned east and then south around the northern tip of the Key. Some 30-40 yards farther along, we saw a strange sight: a series of PVC pipes, stuck or drilled into the rocky shore, each hosting a single mangrove some 2-3 feet above ground, growing from the top of the pipe. A strange reforestation method, we supposed. Behind this sentinel line were signs denoting the return of the Key to being a bird rookery.

We continued paddling south with the wind on our port beam, then turned back southwest, completing our rounding of the oceanside point. Here we found the other side of the large sand area we'd initially paddled across on our approach. As we paddled along, we saw more and bigger fish here, and Sally pointed out to some medium dark grey shapes silently gliding in a loose formation of three through the water. Baby blacktip sharks, about 18 or so inches long, languidly and effortlessly cruised past us in the opposite direction in about two feet of clear Biscayne Bay water. I threw out my small folding aluminum anchor and relaxed at full anchor scope, pulled by current and pushed by wind, while Sally drifted slowly apart, paddled back, and drifted away again in a lazy hazy day sort of just hanging out scene. About a mile and a half or so to the south, I could see "Mount Trashmore", the 200 foot-high south County garbage dump. And beyond that I could see the low, dark shoreline and above it in the haze, the more distant towers and stacks of Turkey Point, the FP&L nuclear power point. We sipped our drinks, took some pictures, and then paddled off, back towards the put-in point.

On the way in, we headed towards the Deering Estate itself. Behind us on the way out to the Key, it was basically out of sight. Now we could appreciate its stately beauty as we paddled towards its enormous backyard lawns, its royal palm-lined walkways, and its sizeable private dock and turning basin. Along the way we passed a few lobster pots, but saw nothing in them as they lay in the dark brown eelgrass as we glided by. Visitors walked the waterfront and grounds, and we waved to a little girl in a pretty white, frilly dress.

We returned south along the shoreline to the canal, and paddled around a bit. On the south side of the canal, a 3-storey oceanfront home of a modern squarish design sat empty to the elements, either only partially rebuilt after Andrew, or an only partly completed new house. We wondered what the story was behind the abandonment. As we paddled to the property's private concrete boat ramp, a motorcyclist on an off-road bike buzzed and bratted down to the Bayside edge of the property, then whined off again, back out the main road.

We put back in the midst of a shoreline Mother's Day family fishing outing. We threw the Scuppers back on top of the Jeep and headed home.

I'd last visited Chicken Key some 35 years ago, and time, tide, civilization, and uncaring visitors had wrought their combined and cumulative effects on the little island. And a devastating major hurricane had cleared it of much cover, only to accelerate the human-induced destructive effects since Andrew. It was nice to bring my wife to see the site, and even better seeing the island being brought back to life again.

May all visitors, especially paddlers, take heed and take care, and enjoy but not destroy the fragility of our Bayside beauty.