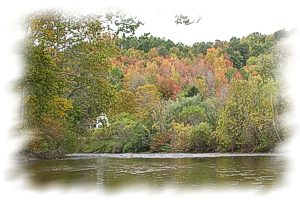 I decided to extend parents' weekend at Bennington College in Vermont by spending some time on "foreign" water, since most of my paddling is done in LA/MS.

I had made reservations with Battenkill Outfitters, who were able to provide me with everything I needed including a solo Old Town canoe, and lots of information about the river. Since the weather was dicey with rain predicted, I opted for a short 8-mile trip, from the put-in to the New York State line takeout.

The water was a little low, but with a pretty good current and a few tricky rapids. There were a few places where I dragged a little, and had to dodge some rocks, but overall, it was a great 2 hour trip.

It was pretty late in the season, and I seemed to have the river to myself. The only people who I saw were either fishermen, or people on the bank in some of the few houses that exist in the flood plain. 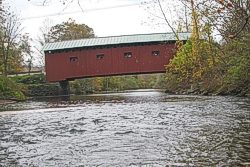 The leaves were beginning to turn, and there's some nice scenery along the way, including a 1852 covered bridge and a few farms. Probably the only drawback that I can think of is the fact that the river was paralleled by a road almost the entire distance of my trip. While there's not much traffic, it does keep reminding one that you haven't escaped car culture, even though you are in a different mind frame.

It is possible to schedule trips for two or three days on the Battenkill, and it's something that I would like to do in the future.

I camped at Woodford State Park, east of Bennington

No, apart from the canoe rental and shuttle fees

From the south -- In Bennington take route 7 to exit 3 which is the Arlington exit. Follow the signs into Arlington which will put you on route 7A. Battenkill Outfitters are located about 5 miles north of Arlington on route 7A on the right hand side.

There is a map of the river that the outfitter provides