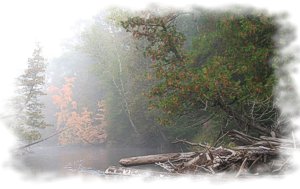 Our journey begins at Paddlebrave Campground, north of Roscommon on the South Branch of the Ausable. After driving up Friday evening, we stayed at Paddlebrave campground with 30+ sites, both rustic and modern. A handful of nice, semi secluded sites were available. Don't expect the solitude you'll get with river camping, but it was a great place to start for a weekend river trip. We came up late Friday and set up camp in the dark. I had called ahead and let the owner, Tom, know we would arrive about 7:30 pm. He lives on site so he opened up the office when we arrived and we talked through our trip plan.

We left early Saturday morning (on the river at 8:30). We wanted to cover the most distance on Saturday and planned to make it to at least Rainbow Bend on the main branch. Our goal was Parmalee, an estimated 13 hours of paddle time by the local livery paddle time estimates. We were confident that we could outpace that without killing ourselves paddling. It was a beautiful day that started around 45 F and hit 70 mid afternoon. Although it was a cloudless day, there was a heavy fog until it burned of around 10:30 am. We literally paddled through the mist.

We stopped at the Durant Castle for a break, 25 minutes. Disappointing to see the castle remnants barely visible. Only the edges of the foundation brake the surface in the clearing at the top of the path from the river. According to locals, the DNR pushed the remains of the castle shell into the basement and filled it with sand after too many people were getting injured by foolishly climbing the walls. The clearing has a sign with pictures and some historical facts. There also was a pit toilet. It was a nice big landing with wood platform and steps to the water.

The South Branch is my favorite section due to the long stretch of wilderness, the Mason Tract, from Chase Bridge to Canoe Harbor Campground. The current is quick with lots bends and turns. Nothing too difficult to maneuver with basic paddling skills. We chased a couple cranes down the river and only saw one lone paddler.

Stopping at Canoe Harbor for lunch, we relaxed for about an hour. We had made great time that morning and a warm lunch sounded great. The temperature was in the low 60's and the sky was the bluest of blues with not a single cloud in the sky. As we approached the landing, a few fishermen waded into the river. Out of character, they were very noisy. I've found most fly fishermen very quiet and I make an effort not to disturb that solitude as I paddle passed them. The break gave us a chance to stretch our legs and peal off a couple layers that kept us warm that morning. When canoeing in the spring and fall, layers are key to staying comfortable throughout the day. 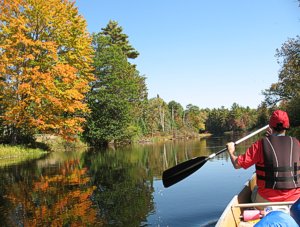 We set off just after noon for the next leg of the journey. We knew with our pace that morning we would make it to Rainbow Bend with lots of light left but we really wanted to make it to Parmalee so that our Sunday paddle to Camp 10 was doable. We knew the morning would bring sore muscles and perhaps not the same excitement to paddle. We made great time and reached Rainbow Bend just after 4PM. As we stretched our legs and walked around the campground, we debated whether or not to attempt the next leg that day. It would push us close to dusk and we knew this stretch of river flowed a bit slower. Connors flats is very slow. Although tiring, both of us had ambition to keep going and we jumped in for Saturday's final leg. It was harder paddling as our arms and backs were tiring but we managed another great time of 2.5 hours to Parmalee.

We arrived at Parmalee Campground about an hour before sunset, plenty of time to set up camp and start dinner. We had the lasagna in a bag, the kind you just add boiling water to. Peaches made a nice desert. We saw a deer about 30 yards away as it passed through the campground. After we hung the food bag from a tree, we sat by the fire for a while and then turned in for the night around 9PM. I tried to connivence my wife that hanging the food bag was not necessary but since she slept better, I guess it was worth the effort. Ive found the rescue rope in a bag works great for tossing over a branch and hoisting food bags.

The next morning was not as cool as Saturday. The temperature was still a brisk 50 degrees. Sunday brought clouds but no rain. After a quick breakfast, we were on the river just after 8 am. The stretch to Luzerne went quick, just under 30 minutes. The river continued to be wide and shallow with stretches of riffles. Not paying attention to the current and bends, we got caught up on some gravel that required us to back up. We saw several deer that morning.

South of Luzerne there was devastating evidence of a tornado. We later learned it had stuck in 2007 and was reported one mile wide. The high banks of beautiful trees were had seen up river contrasted with hillsides snapped off trees that now lay strewn about. Tangles of branches were clumped near the banks on both sides. A few homes were being rebuilt, some stood in disrepair and others were decimated with only rumble remaining. 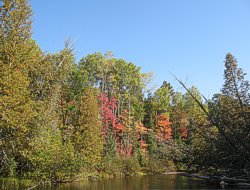 After Whirlpool Landing, the river began to widen as we neared the backwaters of Mio Damn. The stretch had few homes and a feeling of wilderness bordering the river giving. The river widened such that current ceased and at one point it was difficult to see which direction the river continued. On my wifes prediction, we went left. Had we gone right we would have easily lost a 1/2 hour. She also noticed an eagle flying overhead and we would see this eagle even closer as we neared the end of our trip. The bold white head clearly indicated we had seen our first bald eagle of the trip. We spotted a large sign across the now wide expanse of the river and heading for it thinking it was Camp 10. It was a private landing for Rainbow Resort. We paddled another 20 minutes to our takeout at Camp 10 just before the Bridge. After calling Tom at the campground we chatted with the locals that were fishing for pike.

A great journey for both of us and my wife especially enjoyed being in the great outdoors and handled "roughing it" like a veteran.

More pictures of the trip can be viewed here: gallery.mac.com/andyhazel#100231

Hot Showers (selling point for my wife)! Nice sites. Firewood available, modern bathrooms. Great owner. Owner shuttled us back to campground on Sunday. Pickup was at Camp 10 landing, cost for shuttle $45. He took time to understand our trip plan and set a fail-safe pickup if he didn't here from us while on the river. He was also flexible if our takeout point changed.

Great map and paddle times available at this website: