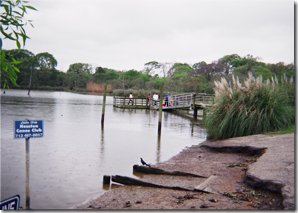 On March 15-17, 2003, my wife and I visited our daughter in Houston. My wife and daughter spent most of Sunday shopping, so I went paddling. Not having a shuttle, I needed to go where I could paddle back and forth from the same spot.

Armand Bayou was a perfect choice. It is a nature preserve in Pasadena, near NASA. The put-in is at Bay Area Park off Bay Area Boulevard. Many picnicking families were in the park, and children were playing in a playground and fishing from a floating pier next to the launch point. The weather was overcast, however, and only one other boat was on the water.

Bay Area Park is on the downstream side of Bay Area Boulevard, so to paddle upstream one first paddles under the Bay Area Boulevard bridges. Just upstream from there, the bayou is quite wide, but I found the water so shallow that my canoe dragged bottom in the mud. That did not last long, however. In several places along the trip my paddle hit bottom, but the going was not difficult. 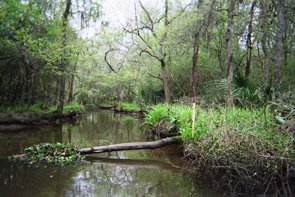 The water is probably tidal; at least I perceived no current as I paddled up the Bayou. I did not think to check any tide gauge data, so I do not know if I hit it at high or low tide. From what online tide data I could find, which concerned Clear Lake, there is only modest tidal fluctuation.

The shoreline is lush. Parts are heavily wooded and parts are marshy. According to maps, the bayou can be paddled all the way up beyond Red Bluff Boulevard. I did not paddle that far, but I did spend about three hours on the water going and coming back. If you paddle past marker 23, you will come to a fork. The main channel is to river left, but if you take the river right channel (the left channel as you face it looking upstream), you will quickly be in a channel little more than 10 feet wide. I continued up that channel until it was blocked with brush. I then backtracked and went up the main channel to marker 24, where I turned around.

Birds were the most spectacular part of the trip. I saw many more than I can identify. I did identify herons, egrets, hawks, cormorants, and of course ducks and geese. Many of the ducks were hybrids of wild and domestic. I saw what I believe was an anhinga. An osprey carrying a fish flew low across the water.

If you are in the Houston area and have a morning or afternoon to slip away to paddle, I highly recommend Armand Bayou. It is beautiful and serene. Along a good portion of the bayou, there were survey stakes along the bank. I hope that does not portend future ill.

Information on the Armand Bayou Nature Center can be found here: http://www.abnc.org/

From Houston, take the Gulf Freeway toward Galveston. Take the Bay Area Boulevard exit near Clear Lake and go left to Pasadena and the Armand Bayou crossing.