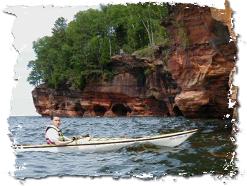 The Apostle Islands was where I did my first kayaking trip 15 years ago. It was one of the most beautiful paddling locations I have ever paddled, and I wanted to do the trip again to refresh my memory and take pictures this time. There were five of us: Marland, John, and Jim from Austin, TX, Vlad from New Jersey, and me from Corpus Christi, TX. Marland did a masterful job handling all the trip research, made all the reservations, and performed the task of Trip Leader.

I drove from Corpus Christi, leaving at 6pm Monday 7/9, arriving at Little Sand Bay at 3pm Tuesday 7/10, driving straight through the night to avoid as much of the city and construction traffic as possible. Met everyone else and camped at Little Sand Bay Campground that night, using Wednesday 7/11 to paddle about 10 miles from Meyers Beach north to the Sea Caves and back. Weather was warm (70's to 80's) and wind and waves were mild (under 10-15 mph) as was the case for the whole week. Water was unusually warm and beautifully clear. 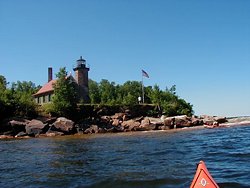 One more night at Little Sand Bay Campground, and then we packed up the boats for 5 nights in the Apostle Islands, leaving early Thursday morning, 7/12. Paddled along the sea cliffs on the eastern shore of Sand Island, out to the lighthouse on the north point, and then over to York Island (Campsite #2) for the evening (about 8.5 miles). Beautiful campsite nestled under beautiful big trees just back from the beach. There are bears swimming from island to island so we carefully hung our food in the trees. Great sunsets! Truly a wilderness setting, with only two other campsites on the island.

Friday morning, 7/13, we paddled east to Raspberry Island, exploring the cliffs and landing at the beach to hike to the lighthouse. Two other sailboats were anchored there, one a one month cruise from Cleveland. Then we paddled around Oak Island and up to South Twin Island staying at Campsite #1. Today's 13 mile paddle was against a stiff 15 mph NW wind and chop. Another beautiful campsite right on the water, with a repeat killer sunset. Survived Friday the 13th with a peaceful night and no bears. 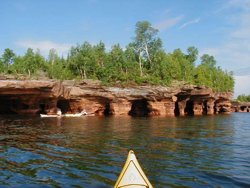 Saturday July 14 paddled around Rocky Island out to Devils Island, the northernmost island in the Apostles to explore the sea caves on the east coast and the lighthouse on the north point. Lighthouse park ranger, a fellow Texan who spends his summers there, gave us a very informative tour. This is where the water gets the roughest, with storms out of the NE kicking up 12 to 40 foot waves at times. Caves were spectacular, and provided "other-world" paddling experiences as we worked our way back into them, sometimes in total dark. Back to South Twin island for another night at the same campsite. After dinner paddled around North Twin Island; sun doesn't set until well after 9pm. Water was covered with moths, and beaches had lines of dead moths washing up providing nourishment for a growing fly population. We thought they were bad until the Park Ranger told us that the Sunday before we arrived, everyone on Raspberry was totally covered in flies like bees cover a beekeeper!

First rain and thunder that evening and early Sunday morning, July 15. As soon as it cleared, packed and made a dash for our next campsite on Ironwood Island, only about 3.5 miles away. Another beautiful campsite right on the beach with fantastic sunset. 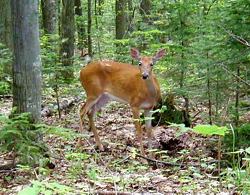 Monday July 16 paddled about 10 miles around Manitou Island, around Oak Island Cliffs on north end of island, and to campsite #2 on the southwest end of the island. Again a beautiful site nestled in trees on a slight cliff overlooking the water. Hiked through beautiful forest up to the cliffs at the north end of the island, reported as the highest cliffs on Lake Superior Wisconsin's Lakeshore. Had a "deer encounter" where we quietly stopped and looked at each other for what seemed like eternity. Solitude was heavenly.

Tuesday, July 17 was our last day; paddling from Oak Island about 10 miles back to Little Sand Bay Campground. Packed up our cars with our wet gear and headed back to Texas, after giving thanks for fantastic weather and scenery on this trip. Truly one of the most beautiful paddle spots in the U.S.

Yes, must obtain permit and make camping reservations in advance through the Apostle Islands National Lakeshore (headquarters is Bayfield, WI). All inforomation is available at the National Park Website at http://www.nps.gov/parks.html under Apostle Islands listing.

Launched from Little Sand Bay Campground about 70 miles NE of Deluth on Highway 13.

Maps, books, and all camping information available at Park Headquarters.