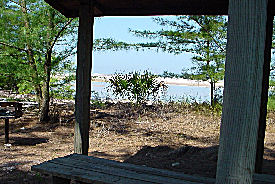 Anclote Key Preserve is a barrier island (accessible by private boat only) on the west coast of Florida about an hours drive west from Tampa.

As soon as I moved to the central Florida west coast area and heard Anclote Key with its recently restored lighthouse was accessible only by boat, I planned on paddling out to it. There's something about going somewhere a car can't get to.

It's a 2 open water straight shot from Fred Howard Park (a free Pinellas County Park in Tarpon Springs) to the southern tip of the island near the lighthouse. I guess Im a beginner/intermediate paddler so a solo paddle across open water made me a bit nervous. Thankfully, all turned out well.

I arrived at Fred Howard Park with my sit-on-top Scrambler around 8am to get an early start and avoid the afternoon storms. I parked on the causeway very close to the island beach and put in there. Rounding the parks beach island (and watching the sting rays scatter), I just headed for the lighthouse you see to the West North West. It was a very calm morning and the water was flat (think HOT bring lots of water). About midway to the Key, a head with whiskers popped up out of the water and seemed to take a look at me. After dismissing my original thought of How could a dog get all the way out here?! I realized it was a manatee. Very cool! Unfortunately I never caught it surface again.

In this picture, just to the right of the lighthouse, is a dock that connects to a boardwalk that takes you right to the lighthouse.

I beached at the southern tip of the Key just to the left of the dock. I saw the Keys lone full-time resident (Park Ranger) taking in supplies from a boat at the dock. As I walked down the boardwalk towards the lighthouse, she and her grandson rode their four-wheeler up behind me and had to pass so they offered me a ride. Very nice lady! As we rode on she said she was taking in some fuel to run the generator.

Exploring the island was fun but a bit abbreviated. While you cant go up the lighthouse, it is definitely worth it to go and walk around it and take some pictures. After checking that out, I followed a path to the gulf side of the island where there are some grills and a covered picnic area. Its a very natural and tropical feel with all of the native vegetation.

I then walked across a big tidepool to the beach. Upon turning around and looking back east, I noticed the perfectly clear sky had changed to include some building storm clouds near the mainland.

That cut my exploration short I thought I could make it back before any storm could fully form so I started paddling back. Luckily the clouds dissipated without forming a storm. A rewarding swim back at the beach at Fred Howard Park felt great.

Keep an eye out for boats heading to/coming from the gulf. The channel runs pretty close to the Key.