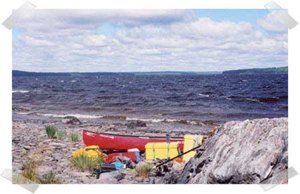 Originally this was planned to be a 5 person trip but the others decided they weren't up for it so I went alone. When I arrived at Chamberlain bridge the wind was gusting at 30 mph. I waited until after 6 pm and loaded the canoe planning to stop at Boy Scout campsite less than a half mile away. For some reason I passed the campsite and went on to the lake to see how it looked...whitecaps... so I continued up the lake on the west side thinking I could make it to Rocky Cove and stay there.

By the time I made it to Rocky Cove the sun had gone down, the stars were shining and the wind was still blowing... I missed the campsite and had to stop and spend the first night sitting in my folding chair wearing almost all the clothes I had along, wrapped in my sleeping bag with a tarp tied to the legs of the chair to cut the wind. The most amazing thing about staying on the shore that night was being able to see the lights of Qubec City to the northwest. It was windy but oh so clear.

At the first sign of light in the east I fired up my stove and brewed coffee and mixed up some instant oatmeal for breakfast. Around 6:30 I shoved off to see if I could cross the lake before the wind got too bad again... made it a couple hundred yards out and the waves started... BIG waves. It took 45 minutes to get back to shore and my total progress for the day was less than a mile.

Spent the second day hanging around a big rock enjoying the wind and beauty of the lake. The ranger went past a couple of times in the power boat and shrugged his shoulders... I did likewise and smiled at him. Around 4, I loaded up my backpack with sleeping gear, tied the tent to it and walked to the next campsite (Gravel Beach) for the night. In the morning the first thing I noticed was the silence... NO WIND!!... the second thing I noticed was the ranger coming by in the boat. He wanted to know if I would like a ride back to my canoe and the rest of my things. Had a nice conversation with him and another paddler who was camping back near the bridge. He pointed out an old growth of pine on a ridge behind Chamberlain Farm. Unfortunately the state has given permission for the trees to be cut.

Day 3: I made it to Lock Dam, portaged around it and after a quick lunch was on my way through Martin Cove and into Eagle Lake. Pillsbury Island was my first real campsite of the trip... and what a pleasant site it is. All the other times I've been on the Allagash I've stayed at Throreau on the other side of the island. The sunrise was spectacular. The lake had a layer of fog but the skies were clear and the sun shinning and burning it off was beautiful. Eagle Lake was a mirror all the time I was on it. This is the first time I had seen it like this and was able to appreciate what a special place it really is.

As I passed Farm Island I couldn't help but remember the last time I was there. We were being chased by 3 foot waves and needed a place to take a refuge and bail out the canoe.

I needed water by then, so I stopped at Zeigler campsite on Little Eagle lake. It has to be the coldest spring water I've ever drank. Zeigler is a site that should not be overlooked. The timing wasn't right for me but I sure wanted to stay there. 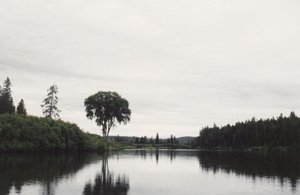 After Little Eagle there is one of many Round Ponds to cross. This leads to John's Bridge and a narrow passage into Churchill Lake. I spotted Scofield Point as soon as I enter Churchill. It was where I'd planned to spend the night and I did. The sun was warm, the water was perfect and there was still no wind... time for a swim and time to rinse out some clothes and dry them in the sun. After a nice supper and an even nicer fire, I hit the sleeping pad early and slept in a little late. Tea and instant oatmeal...took down the clothes line...took down the tent...pack everything up and loaded the canoe for a short paddle to Churchill Dam and a portage. If you get to the dam and have a little time check out the museum they have been working on there:

I took a shuttle around Chase rapids. Usually I run it, but with the canoe I had and going solo I would have had to kneel. Since I have two artificial knees I chose not to do it. On the ride to the drop off, the ranger (Tom) pointed out several areas where a storm had blown down many trees. It looked like the work of a tornado but there was no confirmation of this. He said there were 120 trees across the road after the storm.

The river from the drop off to Umsaskis Lake is pretty mild. Several short rapids but nothing that requires special skills. Umsaskis was also calm so it didn't take long to get across to the bridge and into Long Lake. This is where I saw the first moose, a young bull feeding in the water. I took a few pictures and moved on up Long Lake.

A breeze from the south had developed by then so I took advantage and rode it up the lake. That night was spent at Long Lake Dam. Another group had already taken the prime spot, so I hauled what I needed back to another site. After setting up camp and eating supper one of the kids from the other group brought over a pan of brownies they had baked over the campfire. Wonderful!!! This group was from the Chewonki Foundation in Wiscasaet, Maine. Here's a link for more information:

The next morning after tea and oatmeal, I walked over to portage the canoe over the hill around the dam and found that the canoe fairies had already done that for me. I do hope I get to camp next to one of these groups again sometime.

I wanted to make it to Cunliff Depot that day, but couldn't seem to get things going that morning. It was after 10 before I finally hit the river. Lots of small rapids this day and some wind crossing Round Pond. Approaching Round Pond is the famous elm tree that hangs over the water. The river from Long Lake dam to Michaud Farm is what the north woods is all about... lots of small rapids (especially Round Pond rips leaving that pond) and scenery that keeps you always looking and snapping pictures. 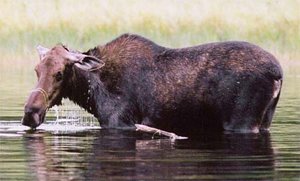 There was a cow moose feeding after the Musquacook Deadwater. It didn't seem too concerned with my passing so close and only gave me a passing glance when I stopped for a closer look. The last night was spent at Hosea B campsite. I never liked this site much because it's so small but being alone it was perfect. There are the remains of an old log cabin behind the site. I'd love to learn more about the history of this place.

It rained all night and around 4:30 I sat up and wondered if I had pulled the canoe in far enough to keep it from moving on without me...got up, put on the rain gear and stumbled down to the river. The canoe was where I had left it and the river didn't seen to have risen much, if at all. I tied the canoe to the sign post and went back to bed for another hour.

First thing I noticed that last morning was two moose feeding a hundred yards down river from me. It was still too dark (and rainy) for pictures so I just sat and watched for awhile. Took off around 7 and paddled on to Michaud Farm where you must stop to check out of the Waterway. I asked the ranger if she would please call Norman for a ride out. I had way too much with me and had decided I really didn't want to portage it all around Allagash Falls.

Norman arrived an hour later and drove me to my truck in Allagash Village. I then followed him to St. Francis to help unload a few canoes and pay him for his services. Norman is the only outfitter I've ever used and he's proven to be reasonable and reliable... he's also a nice guy.

Had I given it more thought I would have pared down on what I took along. As I said before, the trip was originally planned for 5 people. They actually came from Ohio and started the trip. We spent the first night at Boy Scout campsite. In the morning some of the group came to me and said they were not prepared for this trip. When I asked why, they said they had gotten cold during the night and didn't think the sleeping bags they had were going to work out. They told me the bags were supposed to be rated from 15 to 60 F. I asked to see the bags. It was clearly printed on them 15C-60 F. Looking back it was clear that they didn't belong there. The down side of this was that my brother in law had traveled with them from Ohio for this trip...and he was prepared. We had to go back and leave. When I decided to come back a few days after getting home I just took along a couple of the boxes I had prepared and left. I had enough food for 3 weeks and ended up hauling it all back home. I also had along a two burner Coleman stove and should have left it behind and only taken a single burner. The water filter was never used (tablets worked fine for the spring water). I didn't need a full cooking set for myself and also didn't need two tarps. The # 10 cans of freeze dried bacon and eggs omelets are still sitting in the basement.

I have learned from this experience that tripping solo has its own rewards. While you must do everything yourself, the options are endless. Go where you want, when you want and stay for as long as you want. The best part is sitting in front of a fire reading and not having to carry on a conversation... although I did notice myself talking several times along the way to the river??

Norman L'Italien at Pelletier's Campground in St. Francis, He provided me with a Discovery 158 canoe and shuttle service for my truck from Chamberlain Bridge to Allagash Village.

Non residents pay $8 gate/road fee and $5 per night for camping on the Waterway.

Best you use the Maine Atlas & Gazetteer from DeLorme publishing. Interstate 95 to Medway, Maine. West through East Millinocket and Millinocket to the Baxter State Park sign. I didn't clock the miles but it must be about 40 or so to the Chamberlain Bridge where I started.

The St. John's and Allagash map from DeLorme and NFCT maps 12 and 13