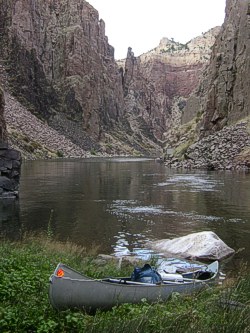 The upper end of Alcova Lake (Reservoir) is Fremont Canyon, a narrow, drowned canyon 3-1/2 miles long with sheer walls hundreds of feet high spotted with juniper/pine trees, caves, grottoes, & arches high above the water. The water is clear and cold, as its source is the bottom of Pathfinder Reservoir upstream, either from the discharge valve at the base of Pathfinder Dam, or from the hydroelectric generating station at the end of a 2-1/2 mile tunnel ending at the tail waters of Fremont Canyon itself.

This weekday afternoon evening trip was a follow-up to the 7/25/15 weekend mid-day trip in which we had encountered heavy motorboat traffic & wake-induced chop, so we wanted to know if paddling conditions would be better on a summer weekday.

As before, we unloaded our canoe at @ LAT 42.516600 LONG 106.773684 near the Alcova Launch at Fremont Canyon Campground just north of the Canyon mouth & then parked farther away from the nearby campers.

Our paddling route took us 75 yards south along the shore of the main lake, then to the right & up the 400' wide, � mile long NE-SW first section of the Canyon. As the prevailing wind is from the southwest, & the vertical shore complicates self-rescue, winds over 20 MPH here can be dangerous, but there was only an intermittent breeze and 6" waves this afternoon. There was a "scoop" effect along the outside bends that increased wind speed & slowed us down, but too localized to increase wave size very much.

A pink limestone formation about � mile on the way in had some large caves on the right with some flat floor areas. It seemed possible to scramble up, drop a rope & haul a canoe and camping gear up into them for weather-proof camping, but being so close to the water would necessitate packing ALL waste out! (see the Biffy Bag @ www.bigffybag.com)

After 1.5 miles the same small bay we saw on July 25, with a wooded saddle, appeared on the right at LAT 42.498816 LONG 106.781857 (Section 9, 29N-83W). It still looked like a good primitive camping spot so we went ashore to scout, but a well-used trail crossed the saddle between two closely-spaced juniper trees, leaving no level spot large enough for a tent. There were plenty of places to hang hammocks however, so perhaps a nice hammock with a rain fly would open up new opportunities for canoe camping in near-vertical landscapes like this one.

We saw only two boats going in � a pontoon platform boat trolling very slowly, and a big deep-vee power boat with three young couples which leapfrogged us continuously while anchoring at different spots to cliff-jump into the lake.

3-1/2 miles of paddling up the narrowing Canyon put us at the Pathfinder hydroelectric plant, where the cliff-jumper's boat caught up to us but turned immediately back. With no other boats around for a possible rescue & dusk upon us, we didn't attempt to paddle through the boils on the turbine discharge, but instead put-in at a flat landing immediately below the plant to eat & take photos in the dwindling light. 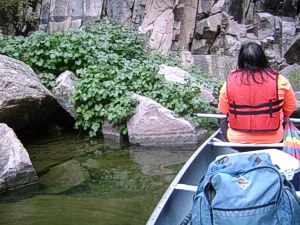 The downstream side of the landing was covered with a lush, broad-leafed ground cover with the rest comprised of grass & small boulders. We pulled the canoe up through the lush triple-leafed stuff but were careful not to touch our shoes/boots afterwards. Sure enough, a check on-line back home confirmed it to be poison ivy!

There was room for several 2-3 man tents on the "non-itchy" part of the landing, even more if you dug up and moved some rocks. Although this was one of the most beautiful canoeing settings I have ever seen, there would be absolutely no privacy & no way to bury waste 200� way from the water as per BLM regulations. (see the Biffy Bag @ www.biffybag.com) Also, with power boats passing by 50 feet away without any intervening cover, there would be no daytime privacy whatsoever outside of your tent, although if you pitched late & broke camp early, you would have the place to yourself.

Suspecting poison ivy at the power plant landing, we investigated similar growth along the waterline on the way back and found it all to be the same! As it turned out, my left wrist broke out four days later, but with only a dime-sized rash.

We encountered no motorboats returning back through the Canyon, but the tail wind we had counted on had all but disappeared. The beach umbrella we had planned to use as a sail saw only limited use until a rare gust of wind inverted it, causing us to pack it up. The wind finally died down at sunset & the water was like glass for the final mile, disturbed only by rainbow trout attacking bugs on the water. As on the 7/25/15 trip we did not have enough time to fish.

Accompanied only by the distant buzz of a fishing boat trolling out in the main lake, we landed just before dark, whereupon the occupants of a nearby fifth-wheel trailer graciously fired up their generator to light us up while we tied on our 17' Grumman canoe.

Even though it was the height of summer, I was amazed by the lack of powerboats during this week-day afternoon. With the evening light, few power boats & a cooling breeze after the heat of the day, this was our best Fremont Canyon paddle ever!

Dispersed (undeveloped) camping is unofficially allowed at Alcova Lake if you:
use a firepan and pack out your ashes & trash, dispose of human and pet waste 200' or more from the water, don't ditch your tent, & don't cut living wood. The Lake Shore is patrolled by deputy sheriffs, by the way. The same "no trace" camping standard applies for BLM land in Fremont Canyon as well.

No fee for day use.

34-35 miles SW of Casper on Highway 220, turn left onto Lakeshore Drive and toward Alcova Lake Recreation Area. Drive all the way (4-5 miles) past all campgrounds, Alcova Marina, etc., to the paved parking lot at the end of the road. Turn around, immediately turn right and drive down to the shale beach at Fremont Canyon Campground & unload your boat(s). Re-park your vehicle at the paved parking lot.