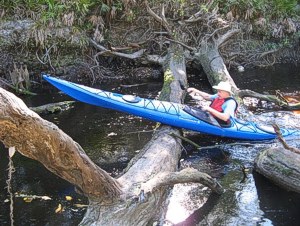 Five intrepid paddlers ran the Alapahoochee or whatever it is, Oct. 30 & 31, 2010. Water was low, but passable. Probably four to five feet of concrete showing above the surface on the pilings of the bridge on Rt. 376 in south Georgia.

A sense of adventure and humor were valuable assets to posses. Perhaps even more so than a paddle. Why, you ask? The forest canopies the river in beautiful arches along the entire run. The price you pay to enter this cathedral is that most of these lovely trees end their lives by falling across the very river they've shaded for so many years. We pulled through more branches than Cheetah and Tarzan ever did. Jack figured it had to be thirty fallen trees at least. I believe he boofed over all but two, but I may be mistaken. He's absolutely disgusting. The rest of us Troglodites had to see the river the old fashioned way, we EARNED it.

As we progressed slowly downstream the embankments became more steep, and the rocks in the river bottom increased.

Below the Franklin Culpepper Bridge we encountered less fallen trees, but more shallow limestone riffles. We bumped our bottoms more than a fistful of toads in a marathon race. I don't honestly know if we hit more rock, wood, or sand. There was plenty of each.

While the strainers were less in number the difficulty in passage increased, due to the higher banks on either side. Jack proved his log jumping skills rivaled anything the Dukes of Hazzard ever did (excepting Daisy Duke, of course). I've a photo showing him boofing a twin dead fall that had to be 10 � 13" out of the water. Kevin demonstrated that he would go way out on a limb (literally) to help his fellow paddlers. 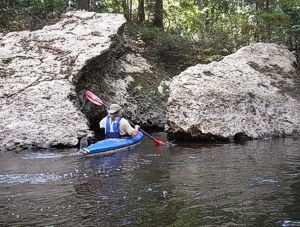 A local fellow stopped to inquire if we had paddled that section of river. He had seen us launching that morning, and ending our shuttle in the afternoon. He mentioned he had never heard of anyone going down that part of the river before. I think we planted a seed to hook another person into this pastime. Or, just one more "y'all crazy" opinion. Heard that before.

Back at camp, we enjoyed a wonderful fire with oak provided by Karen, and had to admit the strain of the day took it's toll. We ain't twenty anymore. Early bedtimes for all. VERY early for a certain few.

The next morning, we scouted a possible take out further down the Alapaha River, but then decided a short conservative trip would be wiser. We had some local feed back that we would surely encounter "Devil's Falls" which only one man in these here parts ever made it past.

Armed with this new knowledge, the experience of the thousand horizontal trees, we decided a shorter trip was the wiser for the day, and elected to end at the bridge of the Alapaha just outside of Jennings, FL on Rt 150.

Leaving the launch at the 135 bridge, we encountered the first blockage straight away, relieving the mystery of how easily we may get off today. The honeycombed limestone banks grew higher on either side while submerged rocks, a few sandbars, and the ever-present logs kept us entertained.

The water often increased in speed and a few bouncy riffles were a pleasure. A few short drops were just plain fun.

The third major strainer of the day was a difficult one. A large tree in deep water with no bank portage available. Deb took an unintentional swim on this one, missing a brace while coming off the log. She reports the water was &*%! cold.

A bit further down the river, two of my fellow paddlers, who, like myself, haven't the sense that God gave a turnip, were putting on their life jackets. Naturally, I inquired why this sudden change of political party.

Devils' Falls awaited below.
I deemed I too would pony up and put on the vest. 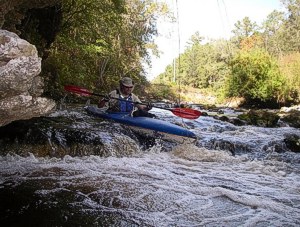 SuperKayaker met his match not getting the long boat maneuvered quickly enough to avoid getting the nose pinned, and had a bit of a time freeing himself. But in the end, successful.

Next was Kevin who had the advantage of sitting higher in his canoe and using a hull designed for whitewater. A bit of a hang-up going in, and a good run down.

Karen followed next, a bit of a hang-up at the top, and a very clean run afterwards. Deb repeated Karen�s moves, and came through nicely.

I wisely learned from everyone and went last managing to escape calamity once again. How many times over the course of human evolution has "Oh no, you go first" failed? I'll wager mighty few. Of course, certain events like the sinking of the Titanic could be used as a rebuttal, but that's not the usual state of affairs.

The rest of the day went without further incident, high limestone banks, ferns, and moss keeping our attention more than the river. Waterfalls, caves, and water seeping from the walls of limestone were enchanting.

We reached the takeout covering 5 miles in 3 hours. Some of this time was picture taking and relaxing. And lunch, of course.

The wildlife told it's story mostly by foot prints in the sandbars. Turkey, bobcat, deer, snakes, smaller wading birds, raccoons, and more left their signature. I only spotted a few large turtles, and four ducks, probably female mallards. Typical of my ventures in the panhandle.

For the river trip, no.