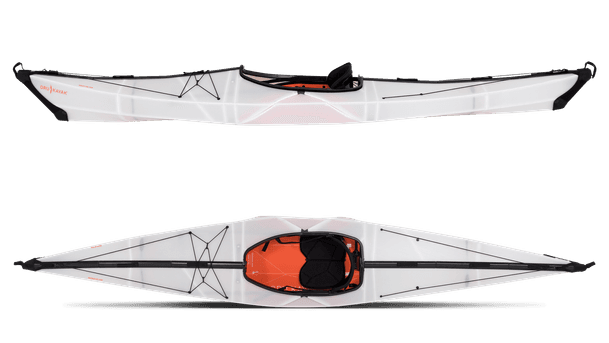 So I did a TON of research on my new kayak. I'm a recreational kayaker just getting into open-water kayaking but most of the time I'm kayaking in the local rivers, lakes, and bays of Maryland. I drive a 4-door Mercedes sedan and racking a kayak on the roof isn't an option, so I instantly knew I needed a packable kayak. My first thought was an inflatable, but nothing stood out to me. Then, a buddy of mine pointed me to the local REI where they had the Bay ST on display. I was immediately awestruck-- the kayak is sleek, beautiful, and seems sturdy as hell for what it is. After tinkering around with it for an hour or so at the store I took one home and immediately took it out on the water. Here's my review:

Assembly: Assembly gets easier and easier as you do it more often. There are a couple steps which are frustrating, like positioning the back-half of the kayak's folds into the seatback but overall, it's super easy. Disassembly is even easier.

Performance: This is where I was really let-down by the kayak. On the water, I noticed that the kayak just didn't hold speed very well, it immediately lost all momentum. I played around a little bit and realized that it was because of a serious port-side lean. Another reviewer on this site actually mentioned the same issue and it became apparent that it was the same one I was having. Other than the lean, the kayak is very stable and glides through the water reasonably well. There were 0 leaks and I had total confidence while paddling. I reached out to Oru Kayak about the lean and they responded quickly that the lean is due to a fold that isn't broken in. The company CEO even sent me a video showing me how to remedy the issue. He told me to crease that fold and let the kayak hold it overnight. I did exactly that and I'm going to take the kayak out again to see how it performs. I will update this review once I do.

Aesthetics: Man is this thing a looker! Short of stitch & glue kayaks, this thing looks unlike anything else on the water. I took it out for a paddle after dark and put a couple of LED lanterns inside the kayak and it just glowed-- it was simply amazing. Buy this and people will always come up to you asking about it.

Portability: You buy this because you need a portable kayak. If you don't need the portability-- go buy a regular kayak (it'll perform much much better). I can easily pack this thing up and fit it in my car's trunk. It's light enough that I can carry it with the shoulder strap but it isn't very comfortable over a long distance. I actually prefer building it out and carrying it over my shoulder that way-- since the weight is spread out more evenly.

All in all, this is a decent kayak. No, I don't think it's worth $1600 which is why I'll probably return it even if the tracking issue is fixed. But if you're a city-dweller and are looking for a kayak you can take anywhere, this is it!