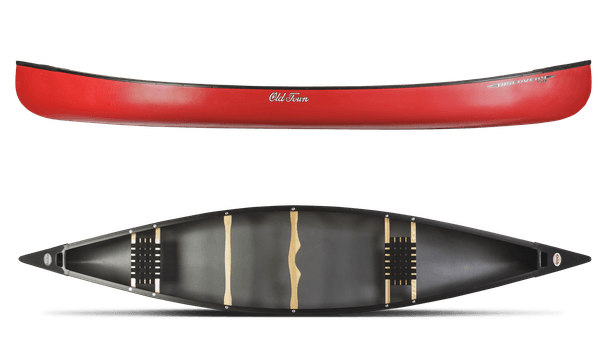 by Old Town Canoe and Kayak
Details
This is a big, heavy, durable canoe. It handles and tracks well, especially when you get it loaded down. I paddle either solo sitting/kneeling in the stern seat backwards, or with a friend in the bow or my kids in the bow and sitting on a cooler in the middle. In all cases I fill a 40l dry bag with water from where I'm paddling to trim out the boat as I am on the 'hefty' side. I've used the canoe for paddle slow moving rivers and lakes so far. It draws like 4 inches of water which is great for getting into some real skinny places. I drag it around, and the material is all scratched up. It has oil canned a little, and there is a slight warp on the upper gunnel of one side, but it doesn't effect its handling. I did paddle it with another bigger fisherman and it was not the best; I think our high centers of gravity made it too tipy and we would of benefited from a much longer canoe. My biggest complaint is how awkward and heavy the canoe is; car topping it myself at the end of a day of paddling is rough. Don't get this canoe if you plan on doing any real portaging or are worried about car topping by yourself. Its not the best canoe out there, but as a dependable and durable craft that does well enough for exploring easy water and fishing its a great bet. I bought the SE-370 Deluxe package several months ago and have been out and a dozen or so trips. I'm in the heavier range and wanted something that could handle myself and some camping gear, or my small kids and the SE-370 turned out to be one of the best values for high weight capacity.

Overall its strengths are its weight, capacity, small storage and transport size, and stability. Its weaknesses are tracking, ease of getting in and out, and quality of bundled accessories.

I purchased a Deluxe Inflatable Kayak seat as well.

Set Up: Everything shipped to be me in great shape. Initial set up can be a little frustrating; you need to install the valves on kayak but once its done you don't have to do it again. And I appreciate that they are replaceable.

Build Quality: The kayak is very well made, and the materials are tough. I don't know how, but I did manage to poke a hole in it when it was in my garage, but I patched super easily.

Inflation: Super easy, took me about 30 minutes my first time and now I think I can do it in about 10 minutes

Handling and Comfort: The Kayak can fit two adults comfortable, I think three would be fun for goofing around but not longer trips. I feel like it paddles better with two people or some weight in the front. It goes blown around aggressively in the wind, and will spin when you stop paddling. I find have to make several strokes on one side when paddling into the head wind. It's fine on calm days or on sheltered rivers, but if you are doing bigger water I'd like at one of the Fast Track or Explorer models (which I may upgrade to). I would also like a slightly shallower draft but I don't think that's what this model has.

The kayak is super stable and has handled wake from wake boats very well. It can be a little tricky to get into and takes some practice doing it solo, especially on steeper ramps or in deeper water.

Deflating Transport, and Storage: I give the kayak 15-20 minutes to dry out in the sun and then wipe it down. It deflates in less than 10 minutes and is ready to go. Stuffing it back in its bag is a little rough as it handles like rolled up carpet, but not bad. After that it easily fits in the trunk of car. I even checked it in my luggage and flew with, though the bag is not very comfortable and carrying more than short distances is painful.

Accessories: The paddles are cheap and rattle, but they do break down into 4 pieces and its nice to not have to spend more money at the start. The foot pump works great, though I suspect it won't last too long and the clasp for folding it up doesn't work very well. The carrying case fits the kayak, but as stated above its not very comfortable, and is quickly showing signs of ware.

Overall I'm really impressed with the quality for price, and I think its a great affordable way to get into kayaking, and seems easily competitive with similar recreational kayaks. I think I'll be upgrading to the explorer series to improve handling and the ability to use a higher seat for fishing, but I'll keep this one to lend to friends and for my family to use.