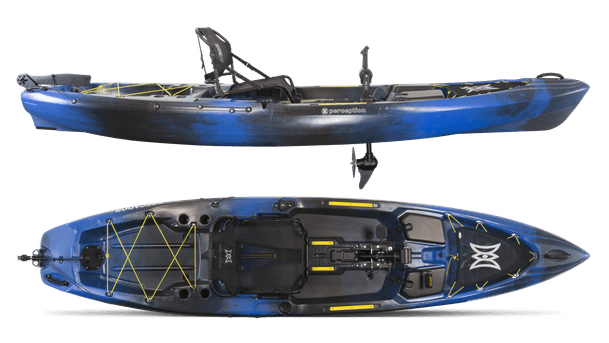 I have wanted a kayak you could peddle for some time, but the prices were just too high and the boats weighed too much. I noticed when Perception came out with the Pilot a year to so ago, but the reviews on the initial products did not sound very good. After several months on the market, Perception had addresses the concerns of the initial product and I decided to give this boat a try. I'm glad I did! I've had this boat for about 6 months and have used it in lakes and saltwater flats so far.

This boat has just about everything you need in a fishing kayak.
- I really like the storage compartments up front that make mounting a fish finder super easy and you don't have to drill any holes! This boat really is fish finder ready with a transducer recess on the bottom. The compartments are a great place for keeping your wallet and keys too. I noticed that water could get in the holes for the bungee cords, so I put some RTV on the inside of the lid around the bungee cords to help seal the holes. Made the compartments much drier. - Lots of room for stuff in front and rear. I prefer the open bow design instead of a covered compartment. - The seat is comfortable- maybe not as comfortable as my Slayer seat ( I also have a Slayer 14.5) - but I can sit in this thing for hours just fine. The seat is easily adjusted for the peddle drive with two thumb screws. Just make sure you tighten the screws down after you remove the seat from the boat or you might loose them if they fully unscrew.
- The weight is very manageable unloaded. Compared to other peddle kayaks, this boat is VERY light - 10 to 30 pounds lighter than other peddle boats.
- Stability is excellent - you can stand easily and you can use the peddle drive as a pull up bar when getting up. - The rudder system is fine. It can be hard to raise and lower it, but if you turn the rudder so it points toward the cords it raises and lowers much easier. The turning radius is not super tight. If I find an aftermarket rudder with more surface area, I would probably buy one just to get a tighter turning radius. - Tracking is good. you typically need to adjust the rudder some to keep it on track. If you are paddling the boat, make sure the rudder is down - it does not track well without the rudder in the water. - Peddle drive is easy to retract into the hull for paddling in shallow water and is built very solid. I don't see this drive failing any time soon. I can cruise around 3.5 mph with a moderate effort on the peddles. If I really push it, I can go a little over 4 mph. The peddle drive is geared just right. You can get some gear noise when peddling hard, but that does not bother me.

Let address some of the initial concerns with the first year's model since once bad reviews get out, it can be hard to over come the initial negative publicity even after the issues have been fixed. 1. Prop would come loose. This has been address on my boat by using 4 nuts along with lock washers to hold the prop to the shaft. My prop has never come loose after 6 months of hard use and I don't think it ever will. The original design only used a couple nuts and no lock washers. 2. The drive would kick up during normal paddling. The drive is designed to kick up if you hit a submerged object. Unfortunately, early models had issues with the plate that sets the kick up tension coming loose. Some of these reports may have been due to the pivot pin that holds the peddle drive not being fully inserted into the bracket. Shortly after I bought my boat, I found that the drive would kick up just like other reviews said. To make a long story short, I realized that I was not always fully inserting the pin into the bracket. This pin has a shoulder machined into it, and you have to make sure that the pin gets FULLY inserted past the shoulder. Once I did that, it as never kicked up again when paddling. - The pin that holds the peddle drive in the down position would work its way out during paddling. This problem was fixed by the addition of a cotter pin to hold it in place. All the hardware is mounted so it can't be lost. Even the nut that holds the pivot pin is large enough so it won't go down a scupper hole if dropped (I checked). - Molded in rod holders are too wide for most rods. This is true, rods can wobble around in the molded rod holders. I've used them like this anyway, but I will probably install after market rod holders at some point.

The Pilot fills a niche in the market that was missing - an affordable peddle fishing kayak. Hobie is trying to do the same thing with the Compass, but I personally feel that the Pilot is a better value, costs less, and has quick reverse which is a big advantage for fishing. I considered both before buying the Pilot.

Just be careful if you let someone else use it - you won't get it back! My wife and I went paddling and I let her use the Pilot. I did not get that boat back until we got back to the dock. I'll take peddling anytime over paddling!