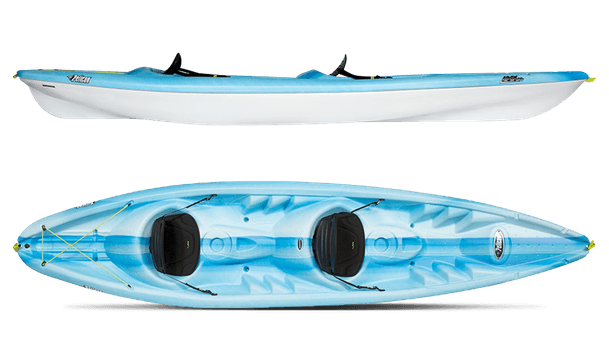 Happy with boat but...

My girlfriend and I have been enjoying our Apex 130T tandem boat for four months now. So far, mostly in the ocean, we've done a few rivers, lakes, estuaries as well. Although it's supposed to be for recreational use, we use it for fishing, it already came with two rod holders. It is very stable, seaworthy, responsive, I can move it on my own whenever my GF decides she's paddled enough, plenty of room on the port well for cargo, as well as on the bow end (I've installed bungee cords on the bow end) .

The boat has two spaces for 8" day hatches that I've already installed. We've battled waves and surf rolling over us and completely filling up the deck and seen it drain dry in less than a minute. We're happy. But, ever since the first time we took it out, before any of the accessories where installed, we've been getting an unusual amount of water INSIDE the hull. A three hour trip will allow between about gallon and a half, maybe two inside the hull. So whenever we reach land, we pull out the drain plug and stand the boat on it's end to drain it. I've gone over ever inch of the boat looking for the water's way in, but can't find it. Another reviewer mentions the drain plug. I'll be buying a new one and see how it goes, and will also get the bilge pump so I can drain the water en route, through the day hatches. Other than that, it's thumbs up. !!!