This is an update. I have had the pack about 8 years. Today I did some mods and then took the pack out on a local lake for a few hours. I thought I would try lowering the seat as many others have done. Just for fun. I had some spare riser dowels so for about $3 at Home Depot I bought 6 inch bolts. No, they aren’t stainless and this is just an experiment. Since the gunwales are 1 inch thick, my 4 inch dowels were too long for the bolts. I cut them down to 3 inches, so it lowered the seat 1 1/2 inches from stock. The seat is now a bit under 7 inches clearance to the deck. When removing the seat, I realized that the web area of the seat was only 13 inches from outside of frame to frame in length, so only 10 inches of webbing. I had a spare seat that was 18 inches, so I cut it to fit the pack. As far as stability, I can’t tell the difference in the new lowered seat. With the longer web area it is more comfortable.

I brought along some paddles to test the pack. I started with a carbon fiber BB double in 260 cm length. I used this paddle sitting on the seat. Next I tried a BB beavertail, 57 inches. Last, I tried a 63 inch ash ottertail that I made. I used the solo paddles from the seat and also kneeling on a foam pad. I am far from being an expert paddler, so I can only report what worked for me. Using the solo paddles in the pack did not work for me. My tracking was poor and I felt like I wasted my energy in correction strokes. I have no doubt an expert kneeler could make this work, but my 70 year old knees don’t like it. The solo paddles from the seat were not any better. For me, the double paddle keeps the pack tracking decently straight with about 6-8 inches of bow wiggle.

i want to be honest about the Pack. It does not track as straight as my 16’6” Wenonah. How could it, it is only 12 ft long. It is not as fast either. Again, how could it be? As a total package, the Pack is terrific. It is so easy to handle out of the water. In the water it is impervious to bumps and bruises. It turns very quickly. It was comparatively inexpensive, as I paid $990 new. My Wenonah is up to $3400! The Pack is fairly tippy when getting in, but once seated I find it plenty stable. Another plus is that I can throw it in the back of the pickup truck, tie it to the bed with four ropes, tie a red flag on the back and away I go. The Wenonah has to go up on the rack, with lots of ropes and pads. Much more work. I understand that Esquif in Canada is making a Pack replacement from T Formex. It is a bit heavier at 39 lbs, but may be the closest yet to the Royalex Pack, which is 33. In conclusion, the Pack is utilitarian, fun, and easy. Great for us older folks and people who don’t want to lift heavy boats. 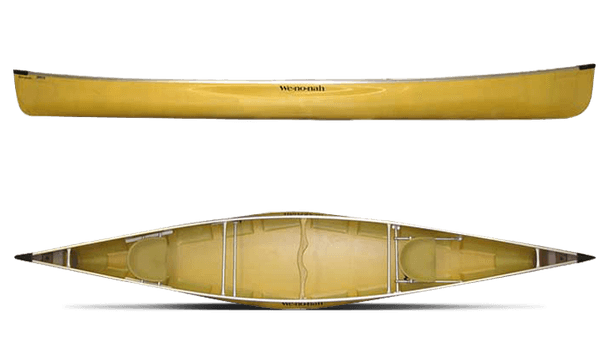 Just a quick update on the Escapade. A few years ago I had added a center seat. I located it far enough behind the carry thwart so I could sit. It seemed a bit too far behind center and made the bow light. I finally bit the bullet and bought the hardware for the removable center thwart. Then I made a nice cherry web seat since the other one was cut too short to move forward. While doing all this fitting I took real measurements on the canoe, so now I can compare to the published specs. Wenonah says the gunnel is 29 1/2in. Mine is 30 1/4. Wenonah says max width is 33 1/2. Mine is 35 3/4. Weight is speced at 51 lb, mine is 51.4 lb. The width is interesting, don’t you think? 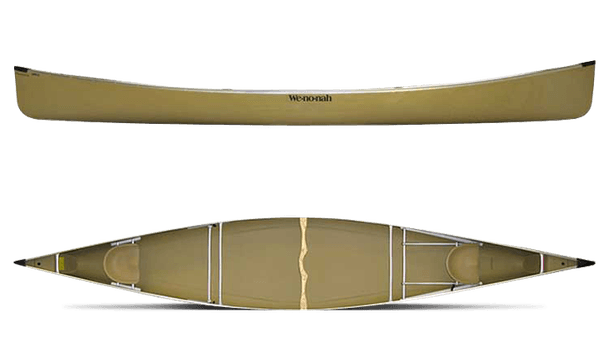 I rented the Champlain in the BWCA a few years ago. My 11 yr old granddaughter and I paddled one fully loaded and my SIL and 9 yr old grandson paddled another one. It is a terrific canoe for camping with a heavy load. I was able to trim it nicely using the packs and the sliding bow seat. My granddaughter and I had a great time laughing at her father and brother trying to race us. He was not very experienced and we easily beat them every time. We fished out of the boat as well and it easily handled the rocking excitement of playing a large northern pike. Beware though! The boat is so long that I could not net a fish for my granddaughter in the bow. I can’t imagine a better canoe for inexperienced paddlers or with rammy kids. And light to carry as well.

I have had the Escapade five years. I bought it used and didn’t really know what it was. After I had it home and after some research I found out I had the Kevlar flexcore layup. It has been interesting over the past five years as my relationship with this canoe has evolved. In the past I have had wider canoes, such as a 18 ft Mad River Lamoile and a Souris River 16 ft. I got out of canoeing for awhile. Then I found this Escapade. It seemed a bit tippy. With inexperienced companions it seemed quite tippy. I found I was not using it much as I also have an Old Town Pack for going solo. But I have also learned with better paddlers like my son and granddaughter, the canoe seemed fine and fast. I have learned to appreciate the Escapade for what it is and what it is not. On my local lake I have been enjoying its performance. I added a center seat and enjoy going solo with a 280 cm kayak paddle. It is certainly much faster than the Pack, but is also 20 lb heavier! Boat wakes on my lake require close attention, but the Escapade can handle them. It certainly is not a Lamoile, which I took out on Lake Superior on a windy day with my daughter. I would not recommend it for big water in the wind, but it is fine on smaller water. This layup is moderate in weight to carry and I am still okay with it at 70 years of age. When I can’t lift it any more I will stick with the 33 lb Pack.

I have owned the Old Town Pack 12 canoe for five years. I know that kayaks and paddle boards are more popular these days, but I much prefer my Pack 12. It is made from Royalex, which is impervious to bangs and scrapes. The 12 foot canoe only weighs 33 pounds, so even an old guy like I am can easily load it. I have gone camping with it and it easily handles all my camping and fishing gear. I paddle it with a double blade kayak paddle and it paddles and turns quite well. Although Old Town no longer makes this model due to the termination of Royalex production, similar canoes are available.

Great Canoe for This Old Guy...

I have two canoes, a Wenonah Escapade and the Old Town Pack. The Pack is a terrific canoe for when I go solo. I am 66 years old, 6'1" and weigh 175 lb. I just got back from a week long trip in the NY Adirondacks with the Pack. It easily carried my camping, fishing, and photography gear. It paddles easily with my 260 cm kayak paddle. It is very stable and I don't understand those who think it should feel like a raft. I have also used this canoe with a grandkid on the deck in front of me, no problems. It is, however, not a tandem canoe and people should not expect it to be one. I have not lowered the seat and find it just fine as it came. You can get lighter solo canoes but they are usually kevlar and very expensive and fragile. The Pack does not require the careful treatment that I have to give the Escapade, which I use when I want to go tandem. Of course longer canoes are faster, it's physics. But the Pack does perfectly what it was designed to do, be a solo, easily transported and paddled canoe at a great price. I think I bought one of the last ones made since Royalex is no longer available. I wouldn't sell it for any price!