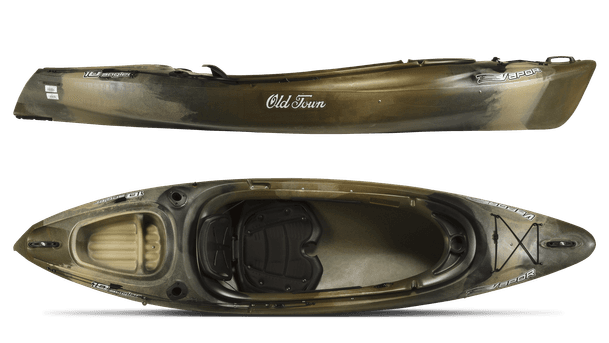 by Old Town Canoe and Kayak
Details
As a 62 year old, slightly overweight guy, I was getting to the point where carrying and moving my 15' Grumman aluminum canoe was a chore. I finally sold it and bought the Old Town Angler after doing a little research on what things I liked to do, fishing and backwater cruising, with some small lake and river travel as well. To say I was pleasantly surprised would be an understatement.

The little Angler tracks well, stability is excellent and it paddles easily. Never did I feel threatened by wakes, wind or submerged obstacles. If there is a downside to the whole yak, it would be the forward mounted cup holder/dash. It is much too far forward to reach, for me anyway, and I just kept my water bottle beside me and it wasn't a problem. The rod holders are nice for trolling, but rods standing up can get in the way of traveling in brushy areas. Too, I would have preferred to have a covered hatch area in the stern, instead of just the opening. I installed a set of cleats and bungees to secure gear and it helped considerably.

The built in paddle holder is a nice touch and I also used it to support my fishing rod, setting the butt of the rod between my legs and resting the rod on the paddle. The anchor trolley is a nice touch, although one I haven't used yet. I can see where if one is wanting to anchor to fish that this will be a handy feature and one I will try out soon. There is plenty of room behind the seat for storage and also under the front deck. I haven't used the bungee area on the bow deck, but could see where it might be handy for a dry bag or some other small item. Weighing over 20# less and being 5' shorter than my aluminum canoe, it makes it much handier to load and unload from the roof of my Jeep Liberty.

All in all, I love the little Vapor Angler and would highly recommend this to someone wanting a stable fishing or day cruising craft.