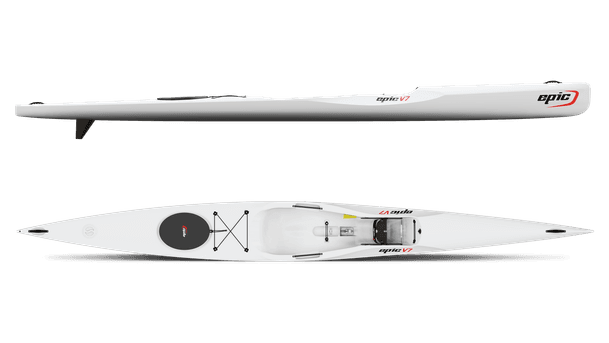 by Epic Kayaks Inc.
Details
The V7 is great fun. It is at once stable and responsive, a pleasure to paddle in both mild seas and chop. And it goes almost without saying that the V7 is a bargain among surf skis.

Even so, I must report that the neoprene hatch cover can fail. This happened to me in a surf launch when a wave broke over the boat and collapsed the hatch cover. The V7 swamped, and I was lucky to be close to shore.

I contacted California Canoe and Kayak. Keith, of CC&K, volunteered a new rudder for the one that broke off in surf thrash, and said he would transmit my concerns to Epic.

Then, wanting to forewarn other V7 paddlers as soon as possible, I described the collapsed hatch misadventure in a review sent to Paddling.net. They wrote back that they were surprised to learn of this issue and would get in touch with Epic.

Subsequently I heard from Vince Bechet, Epic's Marketing Director, who wrote back that Epic has a design change coming. New V7s will have a hard hatch cover, and current V7 owners will be able to obtain a hard cover retrofit kit. When the hard covers become available, Epic will work with its dealers so they, rather than Epic Kayaks Inc., may contact current customers.

For now, I award my V7 retailer, CC&K, a 10; and the same goes for Epic Kayaks Inc. The V7 ski itself, with the new hard cover, or with the retrofit kit installed, will earn the same.

by Futura Surf Skis
Details
This morning, I took the ski out on seas more mild than wild; but still enough rollick for fun. The Futura II is terrific--better than I remembered; and just right for me: good looks, good speed, good stability.

I hadn't planned this, first morning on a new boat, but I was even able to perform a rescue, i.e assisted re-entry. A less experienced buddy in his Necky Chatham broached in the surf at the harbor mouth, coming in, and was in the water for a bit while I maneuvered close. He was tired and worried by the time I got to him; but the Future II held its own against swell and the chop roiling about. I was able to get to my friend's boat, help right it, hold it and encourage a tired guy to hoist himself in, pump his boat out, etc. and proceed--successfully this time--through the harbor mouth. The Futura and I solid all the while.
Nice start to a long log of journeys and adventures.