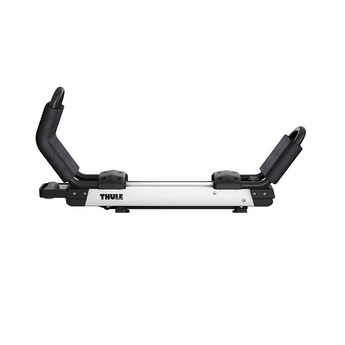 by Thule
Details
Good product - better than the rest if you really have back/shoulder problems. Other products (like the boatloader or outrigger or hully roller ones) all work fine too, but require a bit more effort. Only major downside to Hullavator (aside from cost) is you must lift your entire boat's weight up to waist height, which I'd argue if you can do that readily, then you'd probably be able to make do with the much cheaper extender bar products (Yakima Boatloader, Thule Outrigger). That's why I give it an 8 out of 10. First thing Thule should modify in the future is this - revise the Hullavator to allow a step-wise loading method, so you can raise the bow then the stern, or reshape the cradles to allow sliding the boat forward onto the cradles. As it is, you must lift your boat from a dead-lift to put it on the cradles - this is tough for heavier (60lb) kayaks.

I've got a more detailed review of the Hullavator here if anyone is interested:
http://enviroyak.blogspot.com/2014/09/thule-hullavator-review-with-tip-on-how.html I put some additional thoughts on a blog here if interested:
http://enviroyak.blogspot.com/2014/07/valley-gemini-sp-kayak-review.html

Seat/cockpit ergonomics are a personal thing, and given time one can get used to a range of deck-heights, seat shapes, etc. But the first thing I noticed when I planted my behind in this boat is that it was the most well-fitting cockpit of any boat I’ve paddled – and this without making any adjustments. (We unwrapped the new boat as it was shipped and put it directly in the water.) The front of the cockpit coaming has thigh-grips that are more centrally located than other boats, allowing for a bit more knees-up paddling position. Front deck height is similar to many boats out there – not radically different there, but because the thigh grips are closer to the center, one can get a bit more up-down knee movement during forward paddling which helped rotation and stroke power. I also found the seat and backband comfortable. Footpegs are mostly plastic, but are easily adjustable from the cockpit (yes, from a seated position) – easy to adjust first time.

I paddled the Xcite for about one hour on the Hudson River, empty of gear, no appreciable wind (5 knots perhaps), mild, following swell and boat wakes, in approx. 1-2 knot current. Admittedly a short amount of time under conditions that didn't allow a real "vetting" of the boat's performance, but enough to get a good feel for the boat. Paddling a new boat you first notice the differences to your current boat - I've been paddling an NDK Romany recently, a 16 foot boat good in rough water. At 17 feet, the Xcite has more displacement than my current boat and since I weigh 180 pounds, this is generally a good thing. The added buoyancy gave the Xcite a lively feel. It tracks a bit straighter than the Romany, but still a lively and maneuverable boat. In moving around some buoys, I was surprised by how easily the boat side-slips (hanging draw). This may be due to the cross sectional shape of the hull and the fact that the boat was empty of gear. The boat has a rounded hull in the front, transitioning to a fairly aggressive chine under the cockpit (harder chined than many boats but still a "soft" chine, not a 90-degree Greenland chine). Edging the boat allowed me to make full-commitment turns and sweeps. Edging "locks-in" the boat making it more effective against weather-cocking than other boats I’ve owned recently.

I found the boat well-balanced fore and aft, it appears to have roughly equal volume in front of and behind the cockpit. Having paddled boats with different proportions over the years, I think this set-up may be best. Allows the boat to catch swells and surf early but also allows the boat to get up to speed quickly. In 1-foot following seas during my demo paddle with no skeg, the boat accelerated well, had a mild amount of yaw. Would love to try it in bigger seas. Other things – backwards paddling, turning the boat with sweeps, rolling, primary/secondary stability – I found all such aspects great. Overall it was a fun boat to paddle.

A new boat line from any company is always a question mark, will it be worth paddling or owning? Many experienced paddlers are familiar with the Xcite's designer Aled Williams, who is an expert paddler himself and helped design such boats as the Romany and Rockpool Alaw. So from the outset, I think people are expecting only good surprises from the Tiderace boats. With the Xcite, I don't think they'll be disappointed. As a first impression, it appears to be a boat that will do many things well – play, journey, whatever. If all you're doing is playing in the surf, perhaps a shorter boat that fits like a vice would be best. If you're primarily going on long journeys point-to-point, boats with less rocker might be better. I think this boat will appeal to those who only have room for one boat to do many things. Of course, I haven't paddled it in big stuff – conditions for which it was designed...

- The finishing of this boat is immaculate: Bulkheads are finished on both sides, so there are no sharp edges of fiberglass that could puncture a dry bag. (Don't laugh, this is sometimes the case). Deck fittings are the screw-in Kajaksport type and are encapsulated in glass under the deck (similar to VCP fittings) to ensure water-tightness and prevent snagging. Skeg and slider work well, no problems. The boat has a new style of Kajaksport hatch cover – lighter and stiffer than the older version. I was skeptical at first, but in use they snap on more easily than the older, fully rubberized version. And yes they were water tight after bracing, edging and three eskimo rolls. The 2nd "day hatch" in front of the cockpit is small but could hold a radio, Powerbar or small flare. All hatch covers come tethered to fiberglass grommets inside the compartments – very nice.

- The rear of the back band is held up by short loops of line attached at the rear coaming. This is a higher position than other back band attachment points and appears to prevent the band from sagging down or pinching the lower back. Very nice.

- The seat is aligned with the cockpit coaming and attaches to coaming flanges with screws. This means it is positioned identically from boat to boat – which is a good thing. This may seem minor, but I've found that fore/aft seat position does have a surprising effect on boat behavior. So it is good to have a consistent benchmark for the seat location.

- I had read good things online about the boat's full-plate footrest and adjustable seat. So was disappointed to hear that both options have now been dropped by Tiderace, and were not included in the boat I demoed. Am unsure whether I would have liked these features or not – perhaps Tiderace will offer them as options.