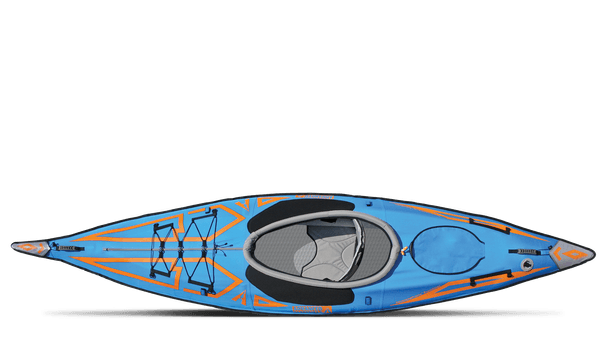 We have owned two of these inflatables since 2007 and have used them many times in several diverse locations and conditions. They set up rather quickly, 15 minutes by myself even with the manual pump, so faster with help and an electric pump. 10 minutes to break down. When inflated and set up properly they track well and the hulls are nearly bulletproof. They are inflatables, so they are slow, but definitely faster than any other inflatables we've tried; moderately strong paddler can average 2 1/2 - 3 mph at a relaxed pace. We have taken these kayaks down river rapids, in open ocean, narrow marshes and creeks and strong tidal currents, from Maine to the Everglades to Grand Cayman. They pack into a suitcase-sized carrier that we have traveled with all over the country and the Caribbean and weigh 42 pounds. They have carried us through thick Everglades mangroves for over 22 miles at a time and over Caribbean coral reefs in 15-20 mph winds. Just a few weeks ago we took them down a river with eight sets of rapids over a 7+ mile stretch and bounced them off a number of rocks. Not a scratch, on the kayaks or us. Again, they are inflatables, so speed is always an issue. They are best for shorter trips, or paddles where maneuverability and stability are important. Also, they come with seats with adjustable, inflatable seat backs, but they aren't the most comfortable over time. A real plus is that they are enclosed and have an inflatable combing to attach a spray skirt, so they are very dry. Ours don't have a hatch, but the newer ones do. Even so, there is plenty of room behind the seat for a large dry bag. At 13 feet long and 32 inches wide they are stable but streamlined enough to get you where you want to go in safety. 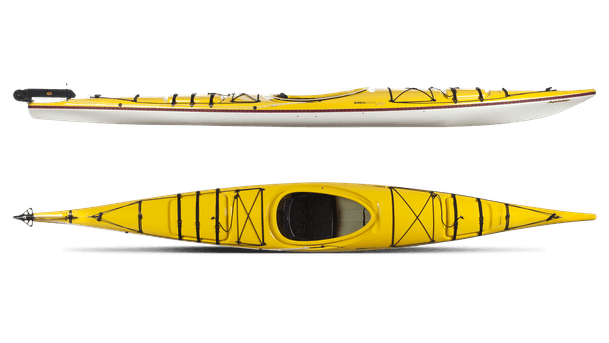 I have had my 16 foot Narwhal for 12 years. I bought her as a used boat from a shop in Connecticut. This boat has it all. It is as stable as can be and has seen me through some very rough conditions along the New England coastline as well as in the Florida Keys. Yes, we bring our boats wherever we go. My boat has a rudder which I use frequently. The mechanisms work flawlessly. I can get up to speed with a few brief hard strokes and I can maintain speed easily. She is easy to maneuver and performs well on ocean waves, on rivers and lakes. Boreal Design is a great company. I needed a new seat cover and they sent one to me in just a few days and tossed in some new decals for free. I highly recommend this boat to anyone who wants comfort, stability, speed and a great looking kayak.

by Boreal Design
Details
I've been paddling my Narwahl for about 5 years now, and I have only great things to say. She is sleek, steady, stable and reliable.We've been out is some nasty weather out on Long Island Sound and she performs like a champ. The rudder really helps keep her straight and true. She is quite comfortable on long trips too. Boreal Design is a fantastic company to work with. I wore out the seat cover, and they quickly helped me get a replacement for less than $20, and threw in some fresh decals for free. I'm a very satisfied customer!