One of my favorite all time canoes was the Bell Rob Roy 15. Mine went with me to a myriad of places, both close and quick, and remote and long. Unfortunately back surgery and a few other ailments of "middle age" prompted me to sell mine in search of something just as nice but lighter. It was, then, with great pleasure, that David Yost showed me the prototype of North Star's new Rob Roy. I ordered the very first one on the spot.

Fast forward two months and my new canoe has arrived. I took it out today to put it through its paces. Much has stayed the same; some things have changed for the better. The original model had a foam seat and a skinny back pad that was torturous after about a half hour. I replaced it with the second generation seat, which was a great improvement. The new model has what appears to be a close relative of the seat used in some Placid Canoes. Since both are Yost designs it's not much of a stretch to figure that out. This one is really comfortable. It will hold water but that can be dealt with. The seat is a few inches higher than the original model. That doesn't make the handling squirrley as it could but lets me also use a short bent shaft paddle in addition to the double. That will be handy. The next significant change is in the deck. The front section sits a little higher and allows easier access and room for really big feet. The foot pegs are easily adjustable from the seat.

In back the deck has been trimmed to make it easier to stow packs and other gear. I had to use a tape measure to be sure but there is definitely more open space to swallow bigger stuff. A really big portage pack will fit there. Throw a smaller pack under the decks at each end and you have yourself a very capable tripper.

Also new is a small wooden deck secured between carbon formed gunwales. I'm not sure it's all that functional but it really looks nice.

Finally, there is a nylon strap across the deck. I refer to it as a Geezer Assist Strap. It makes getting in and out much easier. Performance wise, the picture hasn't changed much. It's still a fast, sweet handling boat. It heads upwind without drama and takes quartering waves on the downhill run without weather cocking.
North Star has answered every one of my issues, however minor, with this new model. It's a definite winner.

by Mad River
Details
The Slipper was designed by Cliff Jacobson and Bob Brown to fill a void in the solo tripping canoe ranks. There are now, of course, many excellent options but the Slipper has aged well and remains a very capable and viable choice for day tripping to canoe camping. 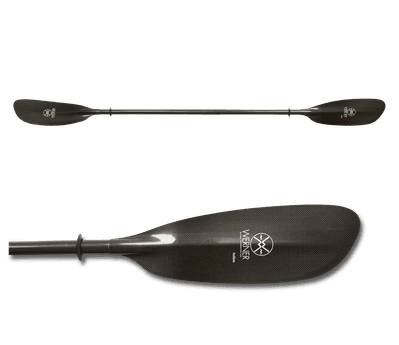 by Werner Paddles
Details
Wow, it's light. When the UPS guy dropped it off I went out and picked up the box. It felt empty. I shook the box. No rattle. When I opened the box, there was the paddle, securely bubble-wrapped.

On the water it's strong, quiet, and very quiet. I really like paddling with it. The adjustment button is a bit small and hard to work, but I think it'll loosen a bit with time and use. The range of adjustment is pretty wide. A person should be able to find a spot in the comfort zone. It's spendy but well worth it!

by Bell Canoe Works
Details
It's hard to believe that I've had this canoe for six years. It just came back from the Boundary Waters where it performed admirably. If you plan carefully it will hold a ton of gear and still paddle well. I was really glad for the deck and the low center of gravity on the last day when the wind and waves really kicked up. Paddling it in this kind of setting requires either tall boots or a commitment to wet feet as some portage landings are just plain awkward. No fault of the boat.
Still a winner after all these years!

by Granite Gear
Details
Just got back from the Boundary Waters. We paddled the "Lady Chain" on the eastern edge of the BWCAW. Lots of small lake and portages.
The first impression of the Quetico is in the engineering. Adding backpacking technology to a portage sack made the long portages much more bearable. There are grab loops right where you want them regardless of how the bag is sitting in the canoe. It held all my gear, a pile made bulky by a big Thermarest and cold weather clothing. Still it fit under the rear deck of my Bell Rob Roy.
The materials themselves seem bomb-proof and held up well to a lot of being tossed around. All in all, a superior product.

by Clipper Canoes
Details
We rented a trio of Prospectors for a trip on the Yukon River a few years back. They're perfect for this kind of work. Two Duluth packs will stand back to back on each side of the center thwart so even at 16' there's plenty of room. This isn't a fast boat but it's steady and comfortable on big water. Clipper craftsmanship is as good as any and better than most. I'd own one of these if shipping to the Midwest wasn't so costly. An excellent canoe!

by Bell Canoe Works
Details
A couple of years on and it's still a winner! I replaced the original seat pad/backband with the newer one-piece unit for a vast improvement in comfort.

The canoe is a bit small for tripping but Ostrum's 2-piece solo pack system will fit fine under the decks and a Duluth "Rambler" fits perfectly behind the seat. It can be done, and the low, decked profile lets you slip under the wind on big lakes and rivers. I sometimes miss using my single paddles but with a good double we really fly. A keeper!

by Bell Canoe Works
Details
I just got back from Spanish River country, NW of Sudbury ON. It was the maiden voyage for the Northwind on a rain-swollen river that got fairly challenging in spots. The outfitter who shuttled us of course wondered if that light canoe (Black Gold) would hold up on his river. (Have you ever met an outfitter whose river wasn't way rougher on canoes than all the others?) Of course, it held up just fine.

Once again Dave Yost has done it right. We were easily the fastest canoe out there yet even heavily loaded, we were able to maneuver through the big water without incident. Winds didn't push the boat around at all. It's stable, aside from a slight wiggle on center, and confidence-inspiring.

All things considered, this is a great tripper, and should work just fine on day trips as well.

Wow! This thing is fast! I just got my new Rob Roy (Kev-Lite)…

Wow! This thing is fast!
I just got my new Rob Roy (Kev-Lite) in the water and it's pretty amazing. It's comfy, stable, and maneuverable. Did I mention that it's fast?
Two day trips don't a relationship make, but I'm really pumped on this one. More later.
The Magic is in jeopardy!

by Bell Canoe Works
Details
I came to a Magic after a painful relationship with a Curtis. It seems the 80s era solo boats just had to be tippy or Real Men wouldn't be caught dead in them. Thankfully, things have changed. I paddled the Magic on day and overnight trips for its first year and found it fast, a bit wiggly, but ultimately pretty comfortable. Last summer it got loaded down with gear for a week on the Spanish River. That slowed its roll down just a hair, which let me get through lots of standing waves and long strings of rapids. Maneuverability isn't its strong point but it worked out OK and gave me TONS of confidence in how it handles itself. This is definitely a keeper!