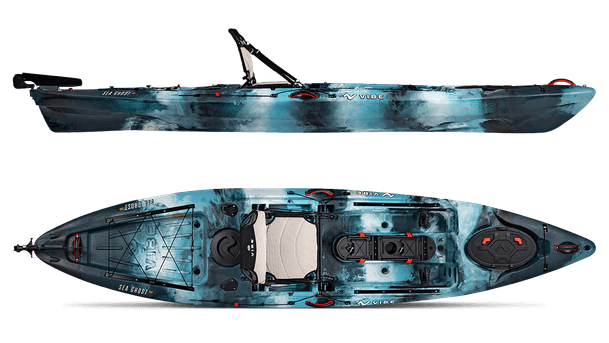 by Vibe Kayaks, LLC
Details
I own several kayaks, sit in/ sit on, and both single and tandem styles. We live in central PA, where most of the kayaking occurs on local rivers or lakes. We also travel occasionally to coastal areas in North Carolina and Florida, taking our kayaks along and using them in the bays and sounds, exploring and fishing. I have always just added rod holders, etc. to these kayaks to allow them the dual purpose of kayaking and fishing.

For a few years, I have thought about purchasing a single sit on kayak that would be better suited for fishing from, and in any of the locations we travel to, especially in the southern areas. There was a price limit, but did not want to go less expensive and end up with a kayak not suiting my needs and leaving me wishing I would have spent more the first time.

Basic requirements for the new yak were the boat needed to be a sit on 12' or longer without being excessively heavy. I am 55+, approx. 175-180 lbs., so do not want to be dragging a huge craft around, nor do I require massive weight capacity for the kayak. It had to be pretty stable without giving up a great amount of speed or agility. As it will be used in coastal areas, I also wanted to go with a more visible color to be better seen by passing boaters. And of course, since this will be my fishing vessel, it should be better equipped/designed from the start for fishing, rather than me modifying a new kayak just to fish from. I prefer to have adjustable foot pegs, as opposed to molded foot areas, as I feel it gives better control and molded tend to dig into the side of your leg after awhile.

I looked around for used kayaks, but unfortunately, in central PA, there are a very limited number of sit on kayaks that come up for sale. Anything in the south was usually gone by the time I called, or shipping/driving to obtain was just too costly. The units I looked at in the local sporting goods stores either fell into the "will be wishing I spent more" or the "more than I wanted to spend" categories. Looking at online stores, I could find some older style Wilderness 120 models, now rebranded under other company names. These seemed to get pretty good reviews, but not all were happy with them. Till I added shipping to the price, I was between the $600-$700 mark. There were a few other local options, including a newer style 120, but while they received better reviews, they still had people not happy with them.

More internet searching finally brought me to the Vibe kayak site, where I saw the Sea Ghost 130. The price was a bit more than the older 120's, but still acceptable for what should be my kayak of choice for a long time. Two things caught my eye while researching this new find: The items that were all part of this price, and the GREAT reviews on this site and others. I could find no one giving it a lack luster review, as I saw with other kayaks. A number of You Tube videos on the yak convinced me to contact the company for more details. This brings me to another high point with the Vibe kayaks….customer support. Through email, I received quick responses to all my questions, and I had a number of them, since there are no dealers near me, and I was still a little unsure about spending this much money for something, sight unseen and tried. I sent emails, re-read reviews and watching more videos. What finally pushed me was when they made me an offer on some overstocked 2015 models. They also were quite helpful in making sure I got the kayak after a mix up on my part with the way it was being shipped to me.

The kayak arrived by truck to my house. The delivery person commented on how well it was packed/protected compared to other brands he has delivered. The kayak was in perfect condition and the only thing needed was to attach the rudder. I did opt for the Odyssey Pro seat, which is very comfortable and recommended by the reviews I had read. Since I did not try the standard seat, I can only say I do like this upgrade. I did not upgrade the paddle, as I will probably purchase a different one later, but the included paddle is pretty nice and should suit a lot of users. If you decide to upgrade later, it will serve as a decent spare and is a two piece paddle. This brings me to the large front hatch, which is great for storing your items, such as the paddle, life vest, etc. You are able to keep everything together and being out of site, helps prevent others from just gabbing any equipment laying around and using it. Don't mind sharing, but some people do not take care of things when they do not own them.

There are a few other storage areas such as the center console, which can be used for a number of things, and also a smaller hatch behind the seat. Both hatches also have a basket that rests on the rim of the hatch, so small items can be kept in them, but can be lifted out to access the inside boat storage. They are attached to prevent them from being lost. There is plenty of room behind the seat, (covered with shock cord), and around your legs. There are carry handles front, rear, and on both sides. They appear strong and give various carry points, depending on the situation. There is also a keeper for the paddle and molded impression in the hull to keep the paddle in place. Nice! Back to the requirements, there are 4 included rod holders, two behind the seat, and two forward of center on an angle to allow for rod placement in that style while you are paddling. The center console also has several holes provided to be used with Scotty type rod holders. There are several larger scupper holes, (plugs included), which allow for attaching fishing equipment and I also use it to secure the yak by running a heavy coated cable through one of the holes and locking it up.

On the water I could not be more pleased. Specs for the craft are 13’, capacity: 550 lbs., weight: 69 lbs. and width at 33". The hull is a rotomolded polyethylene similar to other brands in this group. Very strong and tough. This kayak is very stable compared to others of similar design, but it is not a slug. I can cruise along with others, yet maneuver around with little effort. The Sea Ghost tracks VERY well compared to other kayaks and I found it easy to pick my way through shallow rocky streams. I even caught a nice bass first time out! With the higher weight capacity, I do not have it sitting as deep in the water as one would with lower capacity kayaks, so this works very well to get me through the rocks. The foot pegs also help with this. Unfortunately, I have not had a chance to test in the saltwater or use the rudder, but a well as it tracts now, the rudder will just enhance the experience. As a comparison, after using the Sea Ghost the first time, I let a friend borrow it, and I took my Old Town Vapor 10 out, along with friends using my Perception sit on tandem. The Sea Ghost is my most comfortable, straight tracking, stable kayak.

Concluding this lengthy review, I just wanted to let readers know my thought process and investigation that brought me to purchasing the Vibe Sea Ghost over others. There are many good kayaks to be had in the $500 category, but if you can afford to spend a little more, you will get a lot more kayak and it should be one you will happily use for many years, rather than wish you had waited while paddling something less.

Great kayak, great features, great customer support. Only thing better would be if they are reading this and offer me a job down south working for Vibe Kayaks. Hope they read this…