by Perception
Details
One of the few recreational boats sized for kids and smaller paddlers, I bought one for my daughter's 11th birthday early this year. She is 4'10", 108lbs. She fits in it very well and is able to develop good paddling skills in it from the get-go. She's easily able to keep up with her old man just cruising along. My wife, who is 5'0", 112lbs. felt right at home in it too, and she's never paddled a boat and isn't a confident swimmer. Now, a little more about the Scout. It's light and very easy to carry. The plastic is lighter than on adult models an scratches easily, but it's plenty strong enough for its intended use. The foam pillars just forward and behind the cockpit add rigidity to the deck. They fit loosely, so I Lexeled them in so they don't flop about. The Slide-Lock foot braces are easy to use and the back band is way better than the high seat backs. An accessory(ies)this boat needs are flotation bags front and rear. My kids likes to flip over and this thing is a bear to empty water out. The stern drain plug helps some. With flotation bags, the boat will be easier to manage in the event of a capsize. That'll be addressed before next season.

by Prijon Kayaks
Details
Just want to follow up after spending a year with a Capri Tour. And because no one else has reviewed it yet this year. So far so good. The blow-molded plastic is tough; only minor surface scratches. Even demo Prijons I've come across don't have the deep gouges and fuzz. I've been using this boat mostly for advancing skills this year and a couple of day trips. The foot pegs and seat hardware have held up well. Nothing loosened up or fell out. One of the strings on the forward deck net broke, but I easily tied it back on. The only modification I made was to glue in 1/8" pads under the thigh braces to get a better grip with a wetsuit. Prijon's plastic and neoprene seem to repel each other. The rear hatch does let in a little water. After about an hour of rolling and capsize recoveries, there'll be about a cup of water to empty out. Speaking of rolling, the Capri Tour is easy to roll, as rec/touring boats go. It does require good technique, though. The cockpit is fairly deep and the rear deck is higher than on most sea kayaks so that discourages rolls that finish in a layback position. The Capri Tour goes fast enough to perform those Derek Hutchinson "Beyond The Cockpit" moves. High and low brace recoveries are good and the extended paddle lean turns are easy to do. As a day-tripper, the boat does very well. Tracking is great and there's little tendency to weather cock in the wind. The 24" width allows a good high angle forward stroke. I recently did a 15 mile trip on a nearby lake, and setting a comfortable pace, did it in 3 hours, 24 minutes. I'll still give it a 9 as a recreational day tripper.

by Prijon Kayaks
Details
Now, ready for a bad review on the Capri Tour? Nope. Won't find it here. I'll agree with the previous reviewers about the high quality blow-molded plastic used. It is stiffer, more scratch and gouge resistant than roto-molded linear polyethylene, as well as being a bit lighter. On the water, it's quite fast for a 12-foot boat and it tracks very well; no need for a rudder. Minor course corrections can be made by leaning it a little. Get it up on edge and it turns well. The hull is a shallow "V" with a hard chine and slight flare. There's a flat keel down the middle that's 9" wide at the middle tapering toward the bow and stern. Lengthwise, the hull has no rocker and has a long waterline for its length. Measuring the Capri Tour, it is a full 12 ft. long. The beam measured 24", rather than the 25" shown on the spec chart on Wildnets' site.

Also, you won't see it on the photo on their site, but the inner cockpit rim has a good set of thigh braces. They're not padded, but can be if desired. The seat on my boat is not padded and there's no cupholder. The contour of the seat is fine and I've found it to be better than some cushier seats. There's other ways to bring drinking water along. I'm 5'11" and 200 lbs. and the boat is a very good fit. Someone who's taller and wears shoes bigger than a 12 may be cramped. The rear bulkhead is watertight and the screw-on hatch works well.

Be sure all the threads are engaged when closing it so it doesn't leak. I've never rolled a kayak before but I was able to roll this one. I'm sure a more experienced paddler will find it easy to roll. In case of a swim, a paddle float re-entry can be very awkward, but a re-enter and roll is very easy. Even without a paddle. On the subject of self-rescue, the Capri Tour has no bow flotation whatsoever. A flotation bag that's 42"-45" long works well. The footpegs will hold it in place without having to tie it in. Stability is quite good. Not the rock solid primary stability like a lot of rec boats, but pretty good once you’re seated.

Overall, an outstanding kayak. Can't say it enough; be sure to demo as many boats as you can, but give this one a try if at all possible.

by Wilderness Systems
Details
I just want to update a review I did earlier on this model. I bought it in November last year without first trying different boats. This year, I've had the opportunity to borrow and demo a good number of boats in the $300-$600 range including the Pungo 100. I believe I still made a good choice with the Pamlico 100.

First, this boat has outstanding initial stability and is still quite stable to the point where the cockpit starts to flood. The cockpit is very large and the coaming is very strong so anyone can get in and out of it. This boat would be very good for fishing or bringing along the dog. The wide, flat bottom hull enables it to go in very shallow water and it's easy to go through eddys. There are two tracking channels along the length of the hull and the bow and stern have good entry and exit. As far as speed goes, I found it to be faster than the Dirigo 106 and Otter, slightly more than the Zydeco and just a little slower than the Pungo 100. Tracking is okay; not as good as the Pungo, but the Pam turns quicker. Still, it can be kept on course with good paddling technique. Mine has the basic plastic molded seat; the Phase 3 seat is a lot better. Still, the basic seat can be padded to make it easier to live with and save a few $$$.

The boat does well on lakes and rivers with up to class II rapids. It handles choppy water and swells very good, too. For more open water I'd recommend getting a spray skirt and make sure you can get back in without flooding the cockpit. Overall a very good boat and just plain fun to paddle. 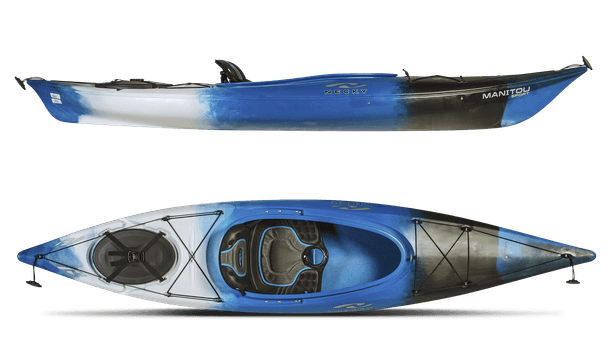 by Necky Kayak
Details
I just picked up a Manitou Sport a week ago after demo-ing a number of recreational boats in the under $600.00 price range. What makes this boat different than many of its competitors is that the cockpit is quite a bit smaller, but still easy to get in and out of (16.5" X 40" inside measurement). Also, the knees can be placed under the deck so you're wearing the boat rather than sitting in it. This goes a long way to better boat control, instead of sitting loosely in it.

On its first trip out I took it out in Northern California's Lake Berryessa on Memorial Day. There was a lot of power boat and jet ski traffic that created washing machine-like conditions. The boat did very well and inspired confidence, even in some good-sized beam waves. It tracks very good for its' short length and was able to maintain course in the turbulent water. I was out for 3 hours and the seat was quite comfortable. The foot braces are easy to reach and adjust on the go. The rear bulkhead and hatch keep everything inside dry. There are plenty of bungees and deck lines. The Manitou Sport is 26.5" wide, making it quite narrower than the 28"-30" beam on many rec boats. It's still plenty stable, though.

I don't have any way to accurately measure the speed, but it seems to move along just as good if not a little better than some of it's competitors. Where it really comes ahead is in how it handles when the water gets rough.

There's no perfect rec boat, and a wider and larger cockpit boat can work better for some folks and for different applications, but if you're looking for something different in a rec boat, check out the Manitou Sport.

by Wilderness Systems
Details
I've had a Coleman Quest (Pelican) sit-on-top for some time and wanted an additional boat of a different type. Right away on its first trip I found it to be far and away a much better boat. I'm 5'10", 215 lbs. and it's easy to get in and out of. The molded seat is good for a couple of hours. It's about as stable as a rowboat and moves along quite well, too. I did a 6-mile trip in half the time it took to do a 5-mile trip in the other boat, and with less effort to boot. I'll give it a 10.