by Wilderness Systems
Details
I recently purchased a new 170 pro. This is my second 170Pro. The current 170Pros are being produced by Tahe and have greatly improved body construction over the China made ones. Kajak Sport Hatches are now used and the 170 still has the best skeg system.

I recently completed a 46 mile bay trip and the only complaint is the seat which they say is the best. After 8 plus hours in the boat the seat cover was a real pain. There is some piping around the back end that presses into you butt and is really uncomfortable. Also the elongated front portion of the seat used to raises your legs hampers quick entrance and exits. After removing the seat pad and the front portion I have since had it out on open water and it handles great in all conditions.
With the seat changes it is can be 10. 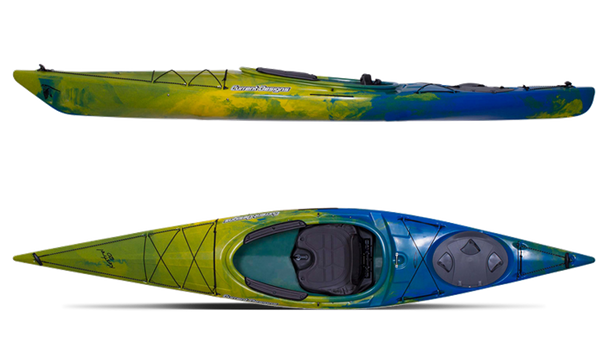 by Current Designs Kayaks
Details
This is my third kayak, but I’m no expert. I had read about the NEW Kestrel and I wanted to test paddle several kayaks before making up my mind which boat I wanted. The day was cold, windy and the lower Susquehanna River was somewhat high with some minor debris. Shank’s Mare was very accommodating, and I was very impressed with the Current Designs Kestrel, and took one of the rotomolded models home with me late last October.

I was only able to get out paddling once last year. So far this year I have had the Kestrel out on some small flat water, some big flat water, and last week, I had the chance to paddle on Penn’s Creek, in central Pa. This week I will be on the Susquehanna again. There is nothing I have not been satisfied with from this kayak on the water. This boat paddles very efficiently, and even with longer kayaks is pretty quick, for its length. Its stability is very comforting, and I can lean it pretty well to carve turns. I really believe its tracking will impress anyone who paddles, even in windy conditions, but it also maneuvered rather well on a low water Penn’s Creek.

As far as the construction of the Kestrel, I know its plastic, and Prijon is alleged to have the best plastic, but in my paltry estimate, Current Designs does not take a back seat to any one. The Kestrel is sturdy, and it’s pretty.

I really only have one complaint. Why didn’t Current Designs incorporate a bow bulkhead? I will add float bags. My only other complaint, if you can call it that, is this past week I had a change to demo the Kestrel 120 in TCS. I know it more expensive, but I was able to see a decided difference, an improvement in efficiency, and I guess I’d call it glide.

I also paddled the new Kestrel 140 in TCS, and this is an amazing kayak. It was the talk among the other dealer reps at that demo day. I will wait until next year, but I know unless something else comes along, this time next year I will be the owner of two Kestrels, because I won’t get rid of my Kestrel 120.