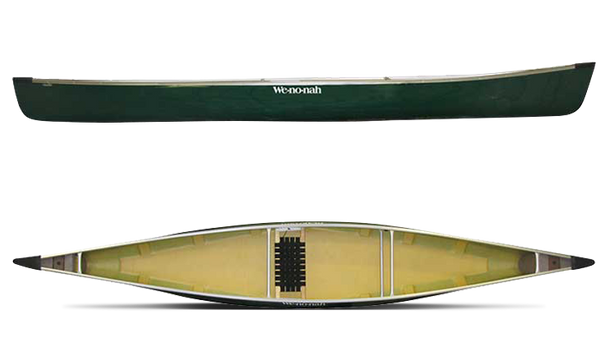 by Wenonah Canoe, Inc.
Details
I purchased a Royalex Wenonah Wilderness in June of 2010 as my first dedicated solo. I wanted an easily transportable solo that would paddle efficiently on flat water and still accommodate occasional Class I-II, especially when burdened with a large paddler like myself (6'2" – 260lbs).

My Wilderness paddled horribly in its factory configuration, plowing a large bow wave and refusing to respond to anything less than the most exaggerated J-stroke. It weather-veined in the slightest breeze and had no appreciable glide. After a few measurements the seat placement was identified as the culprit. I moved the seat almost 4 inches further from to the bow and it became wonderful craft to paddle; great initial stability and secondary stability that encouraged sharp leaning turns.

It tracked well on flat-water and turned responsively, satisfying my every expectation, but also quickly gave birth to an appetite for increased speed. Don't get me wrong, the Wilderness glides, but on a 4-5 hour day trip it feels like a bit more work than perhaps it should.

Purists cover your ears. I have since purchased and installed new thwarts and a seat, all of which I reduced in length by 15% from stock seat and thwarts. The boat now has increased tumblehome, narrower waterline and gunwales, and it paddles and glides like a rocket. Rocker is all but gone so it tracks like it's on rails, but takes more effort to turn. Initial stability is diminished and I can only describe secondary stability as being different.

I can now brace and heel the boat over to the point of wetting a gunwale if I so desire, which I could not safely or confidently do at the stock width. I enjoyed the properly trimmed wilderness, but now I absolutely love my very, very fast, narrowed Wenonah Wilderness. Hope you enjoy your wilderness as much as I do mine, without having to use a saw.